What is the percentage of the global water cycle (evaporation, precipitation) that occurs over the ocean?

Most of the water cycle studies focus on the processes and changes occurring over land with little emphasis on the ocean. Meanwhile, the ocean covers almost 3/4 of the surface of Earth. How much of the global precipitation and evaporation takes place over the ocean? Is it 75% of the total? If the percentage is higher, why does that occur?

The bulk of the planet's precipitation falls from convective storms that develop throughout the Intertropical Convergence Zone (ITCZ). The ITCZ transits north and south of the equator due tracking the sun's zenith throughout the year and is skewed by the position of land, but is generally situated near the equator over the ocean.

Trenberth et al (2006) go into detail describing the different components of the global hydrological cycle, but the core of their research can be summed up in the image below. 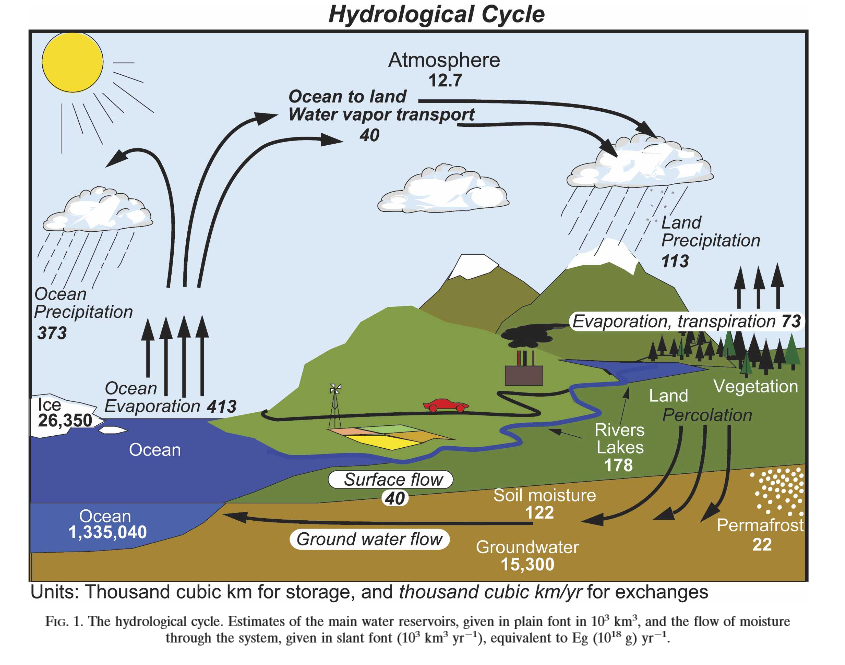 Personally, I do wonder about the ~77% falling over the ocean. That number seems a slight bit low given recent remote sensing data of global annual precipitation.

Perhaps surprisingly, the average rainfall per unit area over the ocean and continents is not much different, namely about 3.0 mm per m2 per day between +/-60 degrees of latitude (where most of the rain occurs). The oceanic average is based upon IR satellite date of cloud-top temperatures, which correlates pretty well with rainfall. Thinking of tropical rainfall, and particularly monsoon rainfall, there are many regions where the mean annual rainfall exceeds 6.0 mm per day. Against this must be considered the great desert areas where average rainfall is almost nil. The latitudinal variation is graphed in http://www.roperld.com/science/PrecipLatitude_Longitude.htm .

The ocean plays a key role in this vital cycle of water. The ocean holds 97% of the total water on the planet; 78% of global precipitation occurs over the ocean, and it is the source of 86% of global evaporation. Besides affecting the amount of atmospheric water vapor and hence rainfall, evaporation from the sea surface is important in the movement of heat in the climate system. Water evaporates from the surface of the ocean, mostly in warm, cloud-free subtropical seas. This cools the surface of the ocean, and the large amount of heat absorbed the ocean partially buffers the greenhouse effect from increasing carbon dioxide and other gases. Water vapor carried by the atmosphere condenses as clouds and falls as rain, mostly in the ITCZ, far from where it evaporated, Condensing water vapor releases latent heat and this drives much of the the atmospheric circulation in the tropics. This latent heat release is an important part of the Earth’s heat balance, and it couples the planet’s energy and water cycles. 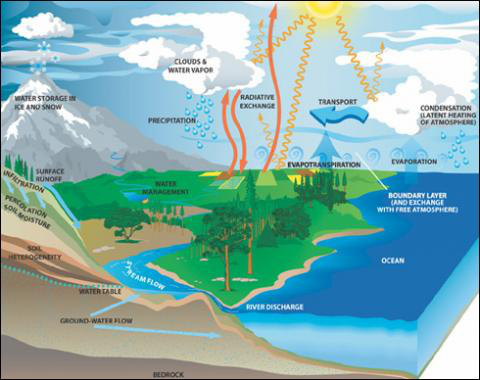 Not the answer you're looking for? Browse other questions tagged ocean precipitation or ask your own question.

8
How has river to ocean flux changed over the last 500 million years?
6
How will climate change affect the latitudinal distribution of precipitation over each latitudinal region?
7
Why is the Ocean water on the west Coast so cold comparing to the East coast?
3
What is the average depth of the ocean?
3
What is the difference between Precipitable Water (PW or PWAT) and Quantitive Precipitation Forecast (QPF) in terms of computer weather model data?
6
How does temperature impact the elevation distribution of orographic precipitation?
0
If the earth were completely smooth and covered in water, what would occur with ocean waves?