When you're working with a skew-T or such, anytime you see the word saturation, it signals to refer to the temperature part of the profile (the right/red line) and not the dew point part (the left/green line).

On a skew T, the saturation mixing ratio is the same shape, up and to the right, along/parallel to the example mixing ratio lines usually given (in dashed light green on this image). But they aren't the same line (unless $T = T_d$): 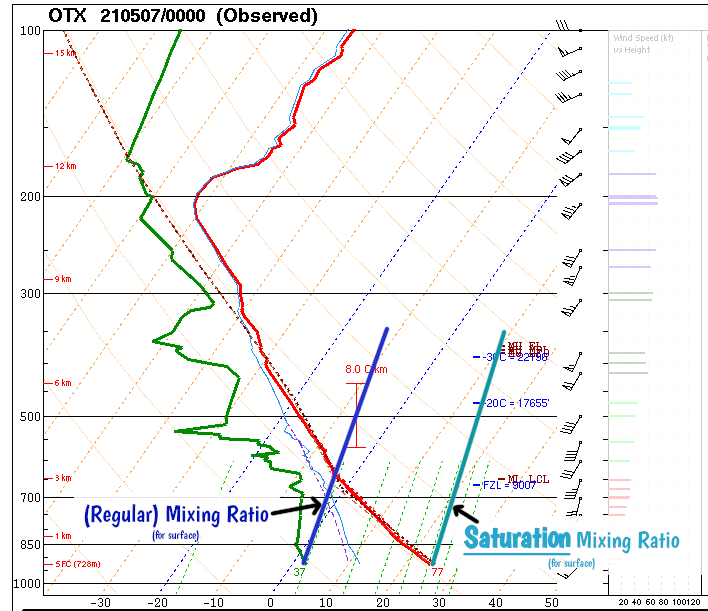 I think the mixing ratio (rv=ρv/ρd) is constant as long as no water vapor is condensed out, but saturation mixing ratio always confuses me a little.

Indeed the (regular) mixing ratio is constant as long as there's no condensation and no outside change to the parcel... for the moisture you stay with the same mixing ratio in ascent (until saturation), such as when calculating the LCL. But you follow the dry adiabat (lines going up to the left on a skewt like this one) for the temperature for condensation-less ascent (so never use the saturation mixing ratio line, the one coming from just the temperature).

11
How do we measure (or empirically calculate) the amount of entropy in the atmosphere and oceans?
30
At what humidity does it start to rain?
9
Evaporation loss formulas
18
Is this ice cover real - and what circumstances are required to make it?
0
Yearly changes of solar irradiation and atmospheric feedback
1
Does total precipitation have different meanings?
4
Potential temperature constant in a well-mixed atmospheric layer?