Geothermal instead of fossil and nuclear?

Why aren't we taking advantage of geothermal heating to produce electricity around the world, instead of burning fossil fuels and using nuclear?

Wouldn't it be a lot cheaper than building new power stations that cost billions?

If we can drill oil wells, why not wells deep enough for geothermal?

Apologies for all the questions, I have the thought in my head and wanted some logical answers.

By way of example, the Habanero geothermal pilot plant was investigated in Australia from 2003 to 2013. It as a 1 MW plant in the Cooper Basin, in the central region of Australia.

The heat source rock, with a temperature of 264 °C was in excess of 4600 m depth. The project cost AUD 105 million and was ultimately deemed uneconomic. The project involved drilling a number of holes to approximately 4600 m depth, injecting some with vast quantities of water and then collecting the steam generated via another set of holes drilled to 4600 m depth and using the steam to power a turbine to generate electricity.

The problems with the project were:

In the picture below, the red areas are the only parts of Australia which has hot rocks to a depth of 5 km that could provide geothermal energy. The area is very small compared to the rest of the continent. Some rocks are deeper. 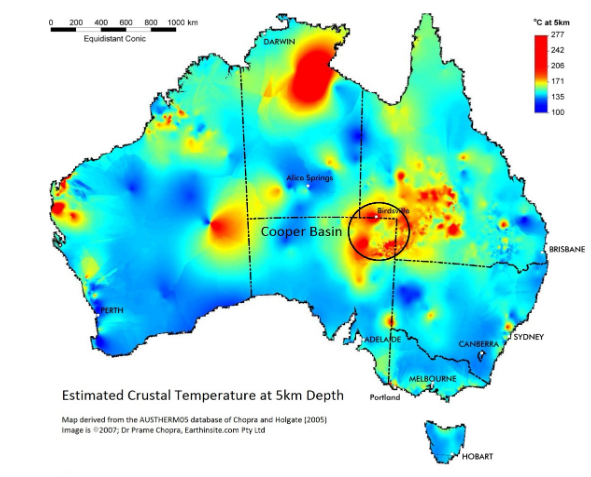 We certainly couldn't replace all of the world's energy consumption with geothermal; there literally isn't enough energy coming out of the Earth.

The mean thermal energy flow through continental crust from Earth's core is about 65 milliwatts per square meter. (We will assume that we will not have the technology to built geothermal plants on the ocean floor.) The land area of Earth is 148,940,000 km2. Multiplying these two together, we get a net flow of energy of $9.7 \times 10^{12}$ watts, or 9.7 terawatts. Over the course of one year, or 8760 hours, this would amount to about $3.1 \times 10^{20}$ joules, or 290 quadrillion BTUs. But the total energy consumption of the world in 2019 was about 600 quadrillion BTUs, which is over double this.

Of course, one might argue that we wouldn't want to replace all energy use with geothermal energy, just electricity generation. This is a smaller number: about 81 quadrillion BTUs. This is starting to look a bit more feasible, but the problem is that it is impossible — not just "we can't figure out how to do it", but "there's a law of physics that forbids it" — to extract 100% of the thermal energy present in a source as electrical energy. Typical efficiencies for current commercially viable geothermal electrical plants are around 7–10% instead, and those plants are built in the sorts of places where there are particularly hot rocks at particularly shallow depths.

Geothermal is still a useful energy source, of course, in those regions of the world where the geology allows for it to be viable. But it is unlikely to ever comprise a large part of the world's energy budget.

Asking whether we can replace the major energy sources we are using today today with one single source is a flawed question. It is obvious that there is not one single solution and anything that can be part of the energy mix should be taken into account. The all or nothing approach like the one in the answer by @Michael Seifert is the classic argument used to criticise all the possible solutions by those who don't want to invest anything on those solutions. If you take separately hydroelectric, geothermal, wind, biomass and other renewables none of them is the magic wand that would solve the energy problem. But also nuclear and fossil fuels are by themselves insufficient, they always worked as parts of the energy mix.

I don't know how much geothermal could actually contribute, but I know that it deserves a lot more attention. The example cited by @Fred shows that it is not a solution available anywhere, but on the other hand it seems a project designed to fail. They decided to evaluate cost returns by geothermal under the most difficult conditions. It is true that the high temperature they found guarantees a better efficiency, but it came at a cost because the cost of drilling a well increases exponentially with the depth. So a lower depth, would have meant a lower efficiency, but much lower startup cost and geothermal projects are capital intensive, the running cost is usually a small part of the total cost. I wrote usually because the water actually matters, choosing a desert for the first project doesn't seem a great idea. BTW the deepest wells of the longest running geothermal project in Larderello are not much deeper than 3000 meters.

So, even though we don't have a lot of places with the right temperature at low depths and enough water available for big projects in the style of Iceland there are many places suitable for small scale projects with small efficiency, but also smaller initial investment. Furthermore there are even more places suitable for direct heating. Simply expanding the use of geothermal energy for district heating around the world could cover a non negligible chunk of our energy demand, just forget the all or nothing approach, magic wands just don't exist.

Only a few regions where hot water is available near the surface (e.g. Iceland) are suitable for producing electricity. But in order to store thermal energy and thus save or replace the consumption of fossil, but also renewable energies and green electricity, underground water volumes are ideal because 1m³ of water with a temperature difference of ΔT = 40°C (e.g. 15°C - 55°C) can store about 47 kWh of thermal energy.

Since the heat flow from the earth's core towards the surface is rather poor (~ 0.09W/m²), I suggest using the summer's radiant energy from the sun (up to ~ 1000W/m²) to use this unbeatably cheap energy storage. In order to absorb this heat mainly in summer, solar modules are a widespread, efficient tool today - water-cooled PV-T modules (electricity & heat production) would be even better, which, for whatever reason, are unfortunately still a niche product.

The power output, but also the longevity of almost all PV modules increases by ~0.4%/°C cooling, while the overall efficiency of a module / area can quadruple from ~20% to ~80%.

So the simplest and most logical solution for a large part of the energy sector would be to harvest summer heat and store it seasonally for use in winter. With the right heat pump, this heat store turns into an ice store in winter, which in turn can be used for cooling in summer.

There are countless caverns, former coal mines or other underground mines worldwide that are suitable as large-volume energy storage in the form of heat/cold storage, pumped storage or compressed air storage - ideally, the combination of the different types of use increases the overall efficiency of such investments.

Since we not only have to reckon with increased water shortages due to climate change, but also with heavy rain and flooding (drought & flood), such underground water reservoirs can also help to get these events under control much better.

Geothermal power has vast applications but it suffers several drawbacks....

However Other options for their exploitation involve using Low boiling point (below 100 degrees C) closed cycle engines. Instead of boiling water, they heat up ammonia or a hydrocarbon based refrigerant.

I see A LOT of misconceptions have been posted here about Geothermal energy.

I will try to address most of them and hopefully people might take this updated data on Geothermal more seriously.

First off, Geothermal is NOT constricted to only a few regions when it comes to electricity production. It can be accessed in the oceans fairly easily and literally anywhere else if we dig deep enough (and with lots of less effort with preexisting geothermal wells, etc.) :

Heating and cooling (which accounts for about 40% of humanity's energy budget), is pretty much accessible in the form of Geothermal across the globe:

There are a lot of volcanoes (inactive and active) across the globe that can be used for Geothermal power generation.

The Yellowstone super volcano can basically power the entire globe twice over: https://www.forbes.com/sites/robinandrews/2017/09/29/yellowstone-supervolcano-could-power-the-entire-planet-twice-over/

Now, what most people here ignore is that Geothermal can in fact be accessed anywhere in the globe if we dig deep enough (which, lets be fair, is not too much of a hassle with modern technology because if the oil/gas companies could dig kilometers deep into the ground for oil and gas 100 years ago, then doing the same, or a little deeper for Geothermal would hardly be the problem).

Furthermore, Geothermal has lower operational costs than any other energy source on the planet ranging between \$19 and \$36 per MWh (especially compared to Nuclear which costs between \$112 and & \$189 per MWh), pays for itself ENTIRELY (yes, this includes cost of digging, etc.) in 3-7 years, is far more reliable, can last over 100 years per power plant if adequately maintained, has no running fuel costs, is cheaper to run and uses smaller amount of land area compared to most other energy sources:

The first Geothermal power plant ever constructed in Italy in 1913 is still in operation today with vastly expanded power generation:

Adding to this, all oil and gas wells (along with the personnel and their skills) throughout the globe can be fairly easily transferred/converted into Geothermal for both electricity and heat production for HALF as much money/cost than it would take to decommission them.

More info can be found here on all these points I mentioned:

https://www.euractiv.com/section/energy/news/game-changer-for-geothermal-energy-as-uk-plant-unlocks-vast-supply-of-lithium/ People seem to be generally operating on outdated information.

Here's an additional article on Supercritical Geothermal and how it could power quite literally EVERYTHING and the main reason its development progressed so slowly (hint: lack of funding, not technology or accessibility) :

One last thing: The biggest obstacle for Geothermal energy utilization across the globe are not accessibility of geothermal resources or technological capability... its lack of funding. Compared to any other energy source, Geothermal is the LEAST funded one of all because myths and outdated information which actually hold no credible accuracy (and are easily countered with more up to date info) are stuck in the minds of many investors (and general population at large).

DeksDeks
9711 bronze badge
New contributor
Deks is a new contributor to this site. Take care in asking for clarification, commenting, and answering. Check out our Code of Conduct.
$\endgroup$
7
|  Show 2 more comments

Not the answer you're looking for? Browse other questions tagged geothermal-heat economic-geology or ask your own question.

15
How does geothermal heating work?
12
viable geothermal energy supply from exhausted fracked gas wells?
3
Are pumps used in geothermal systems?
1
Will geothermal cooling be greatly affected by global warming?
8
Does the geothermal activity influence the climate in Iceland?
2
Geothermal gradient near surface?