How can you explain this storm phenomenon?

It's been a while since this happened, so I don't have many details. About 3 years ago, we had a popup storm here in Louisville. It was completely unexpected and unpredicted. That's not the strange part though. I took at look at the radar (it was about 5:00 PM) and noticed that on a 2 hour loop, the storm appeared as if it was brewing right over the city landfill and drifting towards the north-east. That was strange. They were essentially just thunderstorms with a lot of lightning, no tornado threat.

But then I zoomed out of the radar, and noticed that the same thing appeared to be happening over other nearby major cities (Cincinnati, Nashville, Indianapolis, St. Louis...). I'm not sure where the landfills are in those cities, but I'm guessing that may have been a pattern. That night was unusually muggy, like 100% humidity. The date was 7/20/2011.

(Click here for almanac data for area on that day) 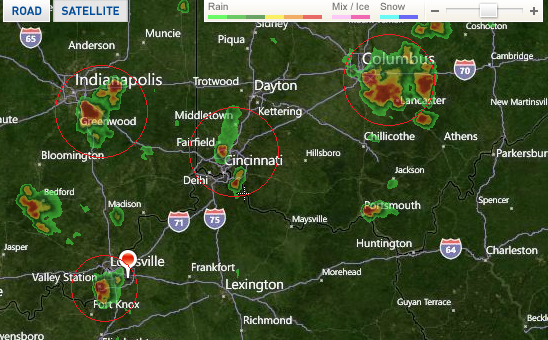 What could explain this phenomenon?

This case is an excellent example of urban-induced convection.

Urban areas have very different surface and soil properties, leading to a different heat balance relative to more natural environments. At times when solar shortwave radiation forcing is high - summer time, early afternoons - urban areas act as heat islands. Sensible heat flux and outgoing longwave radiation are then increased relative to the environment. While latent heat fluxes are decreased because of lack of soil moisture and vegetation in the cities, there is enough moisture coming from the environment to trigger convective cloud formation and rainfall downwind from the urban area.

As to the question why did this occur in four urban areas at the seemingly similar time, it just happened so.

Not the answer you're looking for? Browse other questions tagged meteorology convection thunderstorm or ask your own question.

7
Strangely bright morning twilight over Switzerland
6
What type of storm cloud is this?
11
What ice phenomenon are we seeing in this video?
16
How far away can you see a thunderstorm?
10
Does this optical phenomenon have a name?
2
How can I learn to make mesoscale/synoptic analyses of major weather events?
1
Is there a name for this weather phenomenon?
3
Can anyone explain this frost phenomenon?
1
Does the Columbia Basin, North Cascades and Idaho Panhandle/Clearwater get a lot of violent, rotating supercellular thunderstorms?