Why do the Siberian methane craters have smooth vertical walls?

I expect most of you have heard of this by now. 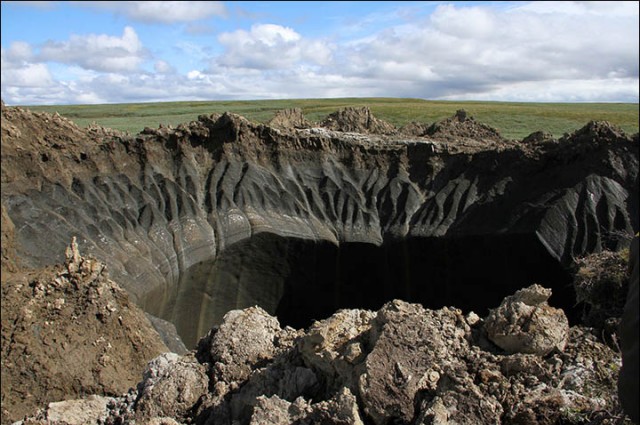 All the news is about whether or not they were formed by the release of methane, but it is also mysterious to me why this crater has jagged edges but smooth vertical walls. It almost looks like it has been drilled.

I'm not a geologist but I would expect it to be rough all the way down. Can someone explain why it isn't?

Permafrost is defined as

a ground, or medium, (including rocks, soils and organic matter) with a mean annual temperature less than 0 °C for at least 2 consecutive years.

The smooth appearance of the walls can be explained by understanding how permafrost works. Permafrost is characterized by an active layer, which is a layer normally at the surface which freeze yearly during winter and thaw during summer - this layer at Yamal can be 1-2 m deep depending on the local ground characteristics (snow depth, albedo, slope, air temperature, thermal conductivity, runoff etc). The ground in the area is ice-rich.

Then let's assume this crater was caused by a methane bubble escaping/exploding and walls could be rough immediately following the event. By deduction, there should not be an active layer found on the walls following the explosion, as it is the first time this ground (walls) were exposed to air. During the middle of the summer, above 0°C air enters the hole due to convection. The ground is ice-rich (can be porous or invisible ice but still ice-rich) and active-layer start to form on the wall.

Due to the near vertical orientation of the walls, saturated soil (or active layer in formation) cannot stand because as soon as it thaw to a depth exceeding its equilibrium limit, it fall at the bottom of the crater due to gravitational forces, exposing a new frozen surface (and the cycle continue until equilibrium can take a few years). Thawing sediments in ice-rich soils can reach saturation quickly, further adding to the weight and accelerating the time of the fall. Rugged and unequal surface are typically the first elements to thaw and fall.

I took this picture about an hundred km from the featured crater. 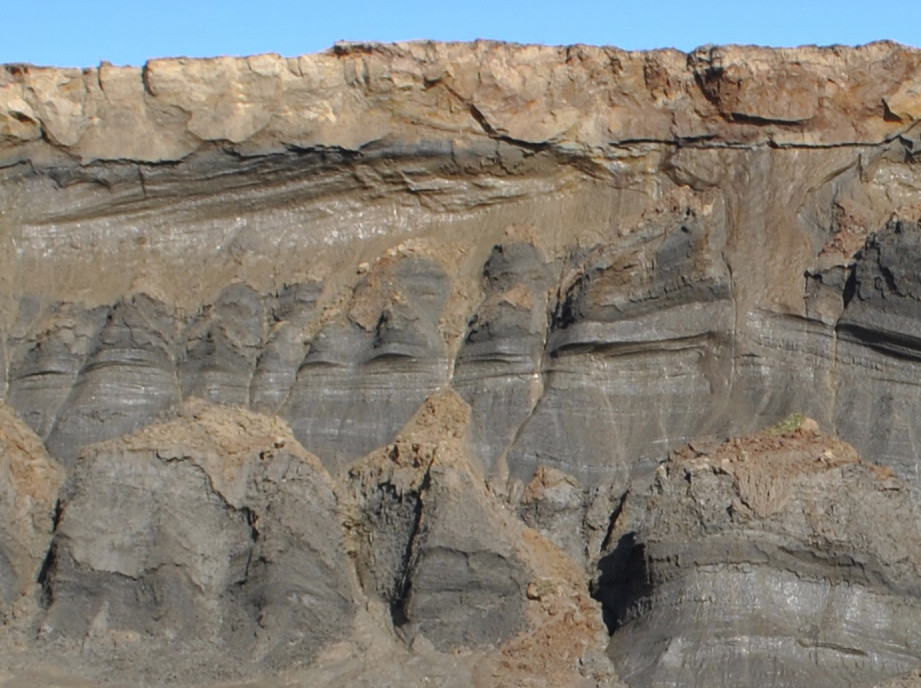 This display a very ice-rich section of the Yamal Peninsula littoral in the course of erosion. This coastal section has been eroding for decades at least. At the top the active layer is light brown, and look dry (1 m deep). Just under this top-layer, the ice is poly-genetic: ice wedge ice-rich soil and massive ice can be seen as well. The active layer cannot stand on the side for the reasons I exposed in the previous paragraph (gravity).

Side-note, the jagged edges were not initiated by anything related to a pingo. It takes decades, up to many centuries for a pingo to develop until its natural collapse. When it happen, a depression can form at its center - which could lead to a lake, but these are not overnight processes. Also, contours of the pingo mound would not appear as jagged edges if this was a pingo - the remains would appear pretty old and vegetated, alike the surrounding countryside.

This answer is probably a bit speculative, but looks at the 'cryolithology' of the region where these craters occurred, especially given the recent images from scientific exploration of these craters, as reported in news sources such as Austraia's Daily Mail article Descending into the depths of Siberia's mystery crater: Experts explore 98ft-wide hole to learn more about its origins. There is a suggestion that the formation may be due to the formation of a pingo as opposed to a methane eruption.

Irrespective of the cause, it is reasonably clear that something 'erupted' from the subsurface, forming the crater. This answer will focus not on the cause, but to answer the question what could have resulted in the smooth walls.

Clues to how the craters have smooth walls and rugged crater surface features come from both the cryolithology of the Yamal Peninsula (where these craters are, according to the article linked in the question) and from the observations in the articles themselves. The Yamal Peninsula possesses an extensive permafrost.

As the Yamal Peninsula is an area rich in hydrocarbon deposits that are being extracted, one of the best insights to the cryolithology of the region is from exploration observations. According to the article Genesis of Methane Entrapped in Ground Ice, Yamal Peninsula, WS Russia (Streletskaya, 2013), the sediments contain ground ice bodies and icy sediments with between 50-95% volumetric ice content.

According to the Smithsonian webpage about a Yamal expedition, these sediments consist of clay, silt, sand and mud - and very rarely are there any rocks greater than the size of pebbles. Effectively frozen and depending on the ambient air temperature, semi-frozen-mud-slush.

So, the sediments would behave like mud, and the ice content would have held the sediments together to make the smooth walls, particularly in the absence of rocks to scour the walls. The ice in the sediments in the exposed areas, particularly on the surface would have melted, forming the drainage rivulets in the picture in the question. The article does mention that there were trickles of water down the sides, suggesting that the crater wall were also beginning to melt.

The articles also suggest this by stating that attempts to descent into the crater were successfully performed in winter, as the ground is hard (= frozen).

A friend of mine works at the Permafrost institute in Moscow and he and his colleagues generally support this idea. I think that edges were formed by falling pieces of soil and vertical walls were formed when big methane bubble that went off the deeper layers.

It has all the hallmarks of a plasma discharge. Burn marks around the rim next to the saw tooth serrations resemble EDM machining scars. 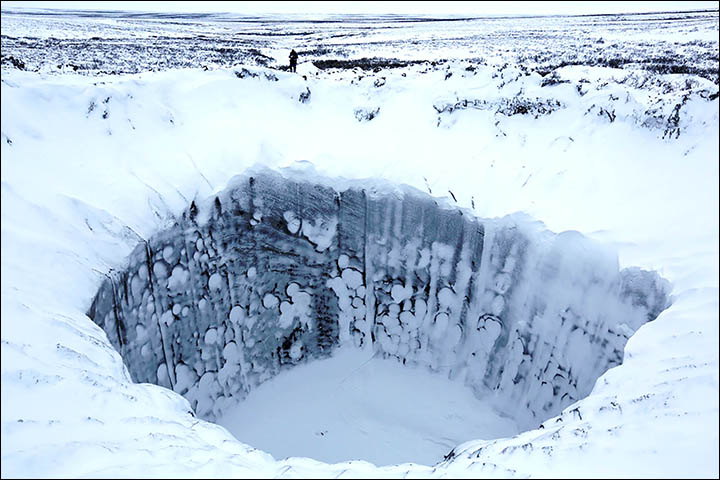 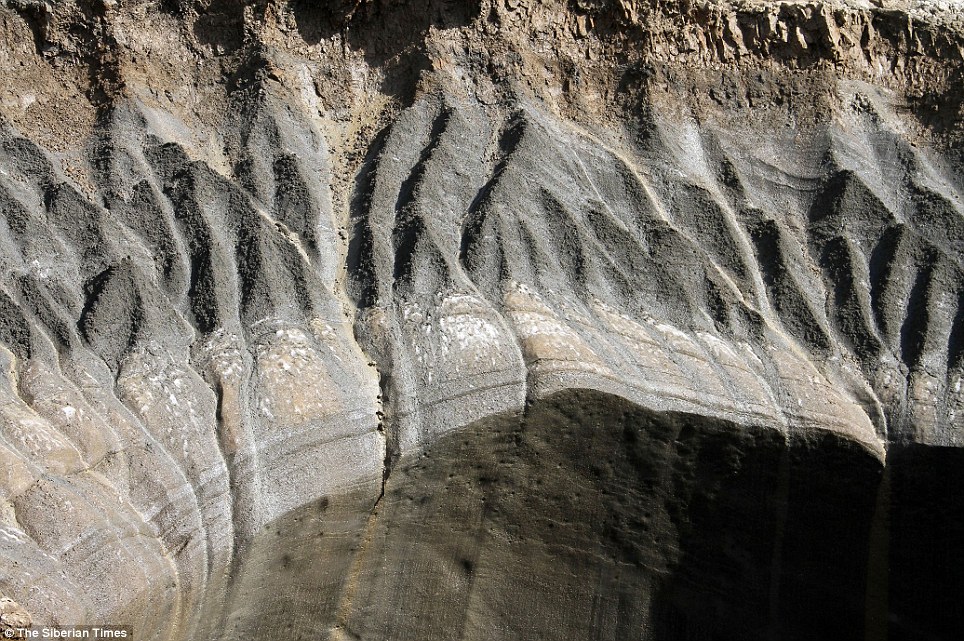 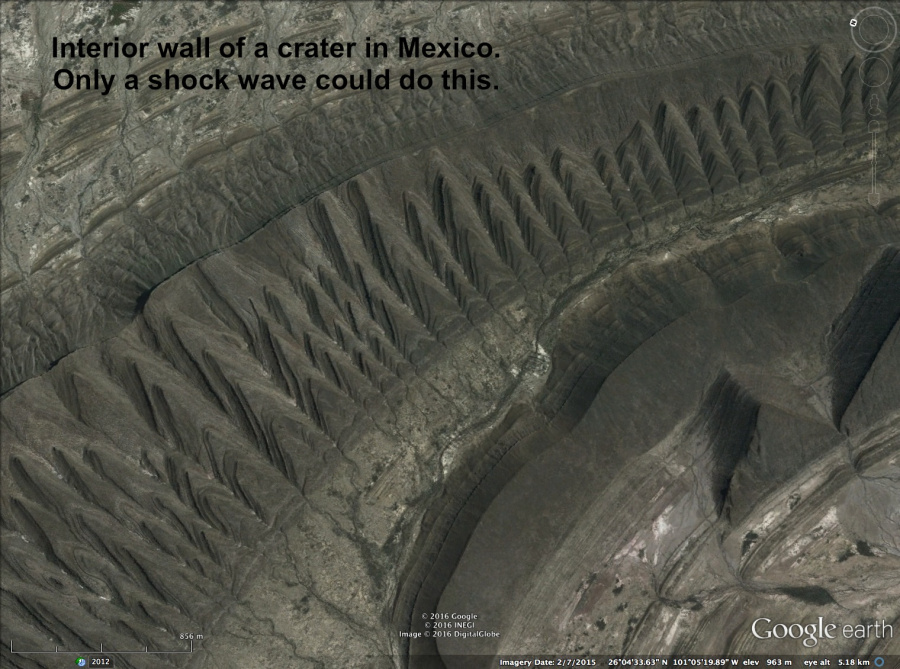 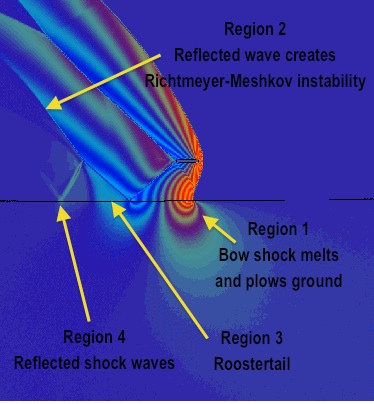 There are some excellent videos on youtube about electric geology if you are interested in more detailed info.

Speculation on the cause could go wild. Some natural phenomena might account for such an event, but likely would have been easily noticed by locals, even at a great distance.

There has been much chatter lately about hypersonic reentry vehicles as weapons.

Such a device creates very different conditions in the atmosphere around it as it forms a plasma from the high speeds involved. It is likely that such weapons are being tested, far from man, but somewhere accessible. A hole that size would only require a test sized vehicle, a scale model maybe. And with such obvious success, you might want to leak pics to notify the enemy of your capability, because the best defense is a good offence.

Not the answer you're looking for? Browse other questions tagged geology methane permafrost or ask your own question.

12
Why are methane spectroscopic parameters harder to determine and relatively poorly known, compared to other Earth trace gases?
4
What are the natural causes for methane formation?
8
Why do fjords have sills?
0
How big were the Siberian Traps originally?
5
How deep does the frost have to go before it becomes permafrost?
2
Is there evidence to suggest that the release of methane clathrates in permafrost regions will impact climate change?
3
What part does methane play in the process of producing biogas?
8
Why is Earth's density gradient a step-function, rather than smooth?
4
If methane decays to $\small\sf{CO_2}$ in the atmosphere, shouldn't there be much more $\small\sf{CO_2}$?