Will the Earth ever stop rotating?

It is well known that the Earth's rotation is slowing down and that millions of years ago there was a point in time where there was only a mere 20 hours in a day on Earth.

My question is in two parts. Firstly why is the Earth's rotation slowing given that angular momentum is conserved, and secondly given that understanding, will the Earth either (a) stop rotating in the future, or (b) eventually begin rotating in the reverse direction to what it is now or will it (c) reach a constant rotational velocity in the same direction it is rotating now and why?

I think the answer to the question will depend on whether the Earth's rotation is slowing at a decreasing rate or at a constant rate.

The short answer is "Probably Yes".

In either case, unless something really unexpected happens to the earth first, such as it being ejected from the solar system, which is completely improbable, it will stop rotating, if only due to it ceasing to be a planet at all.

Strictly speaking, the Earth will never cease to rotate in the technical sense... not while Earth is intact at least. No matter what the Earth might eventually become tidally locked with, whether the Moon or the Sun, it will be rotating, at the same rate as either the Moon's or the Sun's orbital period. For example the moon is tidally locked with the Earth, which means its rotation rate is equal to its orbital period, so it always shows (roughly) the same face, although it wobbles on a regular pattern during each orbit, showing somewhat closer to 60% of its surface area to us rather than a flat 50%.

Strangely, the hypothesis (well supported) that Earth's rotation is slowing got its modern start from Immanuel Kant of all people ironically, who pointed out that tidal friction must be dissipative (we might presume by heat transfer) with geophysical consequence, which Kant claimed to be a lengthening of the day. His then novel idea was evidently supported by none other than Lord Kelvin. I am no physicist, but Earth's orbit has many nuances and influences, such as from other planets and its eccentricity, precession, axis motion in three dimensions and so forth. As the Sun burns away, it loses mass (extremely slowly) and all orbits increase, including the Moon's. So over a few billion years, a calculated effect of the role of any drift toward lunar tidal lock is exceedingly complicated. Perhaps a future supercomputed simulation will shed light on a model that is actually verifiable by physical measurements from a satellite (think ESA Hipparcos). Then we will know something about this question.

No not really, because the earth will be engulfed by the sun as a red giant at which point it might accrete mass or fall into the sun, still rotating at 50hrs/day... we d be talking well above 20/50 Gya. It's alse enough time for the solar system to be disrupted by galactic events like local supernova destruction and being captured by a passing star which migh render it into multiple fragments. 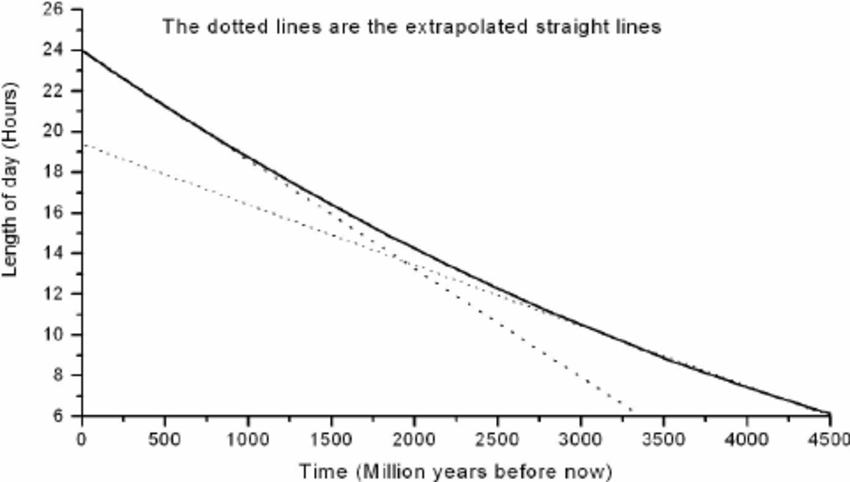 Not the answer you're looking for? Browse other questions tagged geophysics planetary-science earth-rotation or ask your own question.

14
Effect on sea level if the Earth stopped rotating
4
What would happen if Earth suddenly stopped rotating and revolving at the same time?
4
Is there a differential angular rotation on Earth?
3
How much do tides affect earth's rotational velocity?
12
What is the fastest the Earth has ever spun?
6
Seismic migration concepts
2
How does rotating water affect turbulence?