I'm trying to find and use data involving total cloud cover %. I have downloaded data from NCEI/NOAA specifically here and I'm plotting it like this:

I get this plot: 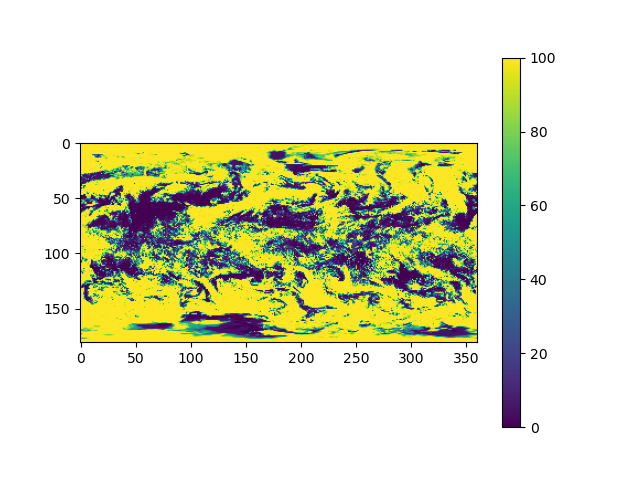 Obviously this is a lot of cloud and it is a lot more than is shown on zoom earth for the same day. I assume that that the total cloud cover % is inverted? Is this common practice and/or will it be the same for the other datasets from the same database?

I wasn't as quick to be convinced, but looks like this GFS model plot of simulated IR satellite over the previous hour for 1Z on the 2nd (so basically the same time as your image) verifies it's not inverted. 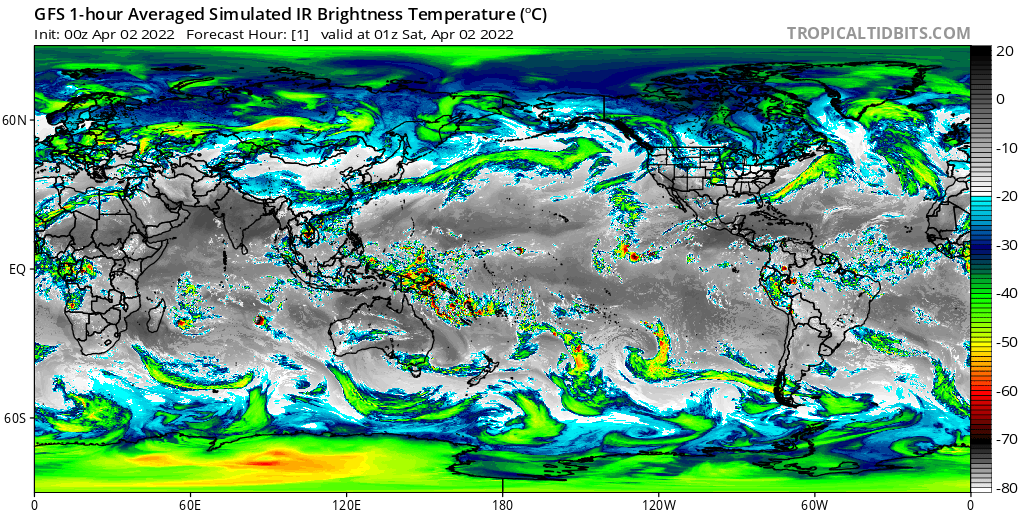 Specifically this feature trailing over the Pacific and east Asia:

I'm surprised its that cloudy on Earth. The one thing that does stand out about your image is almost all cloudy regions are at 100%... which would seem to contrast with the amount of times with partial cloudcover. So I'm not sure on that quite. Though when you throw in fog, stratus, marine layers, convective precip, etc... I suppose its feasible. Or perhaps a factor of data or plot resolution???

It seemed worthwhile to me to take a look at the GOES full disk with cloud top phase turned on to emphasize the different clouds to get a better idea how things really are in the full spectrum of clouds. Do hope you get it sorted, but does seem you might actually be more where you want to be than you thought.

I assume that that the total cloud cover % is inverted?

No, it's not. As gerrit mentioned in a comment, about 70% of the Earth is covered by clouds at any point in time. Science fiction movies and TV shows up to the mid 1960s showed a cloud-free Earth. Science fiction movies and TV shows since then have tended to show a much more realistic image of the Earth, which is mostly covered by clouds. It was the onset of the satellite era that made those sci-fi movies change.

To make matters worse, your generated image appears to be using an equirectangular projection. It appears you have 0 as the north pole and 180 as the south pole (so co-latitude rather than latitude), with equal steps in co-latitude equally spaced on your generated image. This kind of projection exaggerates areas at high latitudes. High latitude regions are much more likely to be cloudy than are equatorial regions.

Not the answer you're looking for? Browse other questions tagged meteorology clouds open-data weather-satellites or ask your own question.

7
Relationship between illuminance and cloud cover
5
How to find Cloud cover data in GFS grib models
4
Why does NOAA no longer provide sunshine data?
3
Are there measurements or calculations that suggest atmospheric ice plates would be horizontal to within 0.1 degrees?
3
Looking for global cloud cover animations or videos
2
Calculating a cloud cover index based on comparison of horizontal and tilted irradiance from pyranometers
6
Are these plane trails seen from satellite
5
Format/interpretation of NOAA Elevation Data