Why is my intuition wrong about the significance of a few degrees' temperature rise?

There has been a lot discussed about historical and future global temperature increases of a few degrees (e.g. the goal of limiting the rise this century to 1.5 °C or 2 °C). Intuitively, I'm tempted to think about this in terms of my local temperature consistently being a couple degrees warmer, which doesn't seem that significant. After all, the temperature can change by much more than 2 degrees from day to day, or even within a few hours, so having highs of 12 °C today and 17 °C tomorrow doesn't seem like a big deal compared to 10 °C today and 15 °C tomorrow.

How do I understand why this comparison is wrong and how a few degrees of change translates to the dramatic impact that seems to be predicted by climate scientists?

I suspect one factor is that the global temperature increases being talked about are not actually uniform at all; some places might heat up more than others, and the effect might be concentrated in smaller time periods (so a particular place might end up 10 °C hotter in the summer, for example).

I'm also guessing that there could be areas in a delicate equilibrium for which a small change in the average local temperature would have major effects. For example, ice would tend to stay frozen or accumulate in a location with a -1 °C average, but it would tend to melt if the average increased to 1 °C.

Are these guesses correct? If so, what research or other resources are there to back them up and explain in more detail? What are some other specific repercussions I might not be aware of?

Another place where your intuition is failing you is that you are confusing climate and weather. Weather is chaotic and highly variable. It is not at all unusual to experience a day where the temperature is 10°C higher or lower than nominal. The effect of a 4°C warming over land will result in significant portions of the Earth becoming uninhabitable due to extreme summertime heatwaves. This will not be cool (pun intended).

Yet another place where your intuition is failing you is that the warming over Greenland and Antarctica will result in significant sea level rise. The polar regions are where warming is most severe -- and most sensitive. While hardly any humans live on Greenland or Antarctica, a huge chunk of humanity lives close to an ocean shore. The warming over Greenland and Antarctica represents a threat to all humans who live close to an ocean shore.

Aside from David's answer, another aspect of global warming is the change in temperature gradients and their impact on ecologies. This map will give you a sense of what parts of the United States freeze first; those dates are gradually shifting later in the year and spring temperatures are coming sooner. That's important for a couple of reasons: Freezes kill nuisance insects (and some crops), and crops are affected by the amount of heat units they're exposed to during their growing season. 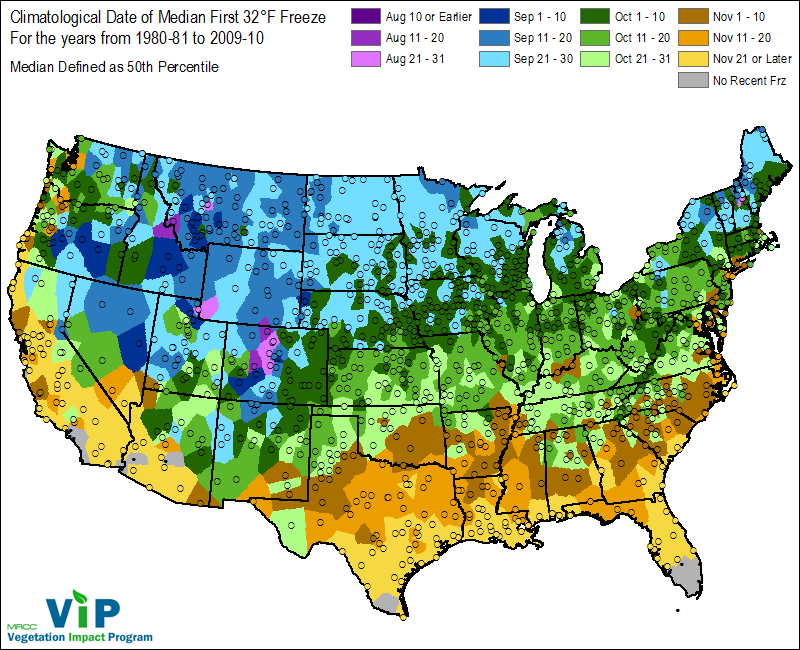 For example, certain plants and insects thrive best in a given temperature range; as temperatures rise, that range tends to get shifted toward the poles. There are insect populations that remain under control because they or their brood die off in the winter because temperatures drop to or below freezing. Warming will shift that freezing line poleward, and also helps some supporting plants that were not common to spread; those insects will become a pest in a region that's not used to them. See Climate change broadens threat of emerald ash borer or Nuisance insects and climate change. (For sea life, we do see a general poleward movement; you can have a fish species that see their optimal water temperature shift by tens of miles, pushing them away from where locations where they've evolved to feed or reproduce.)

In terms of the impact on crops, here's a specific example from Yale360 about coffee production:

The Arabica coffee grown in Ethiopia and Latin America is an especially climate-sensitive crop. It requires just the right amount of rain and an average annual temperature between 64 degrees Fahrenheit and 70 degrees Fahrenheit to prosper. As temperatures rise — Ethiopia’s average low temperature has increased by about .66 degrees F every decade since 1951, according to the country’s National Meteorological Agency — and rains become more variable, Ethiopian coffee farmers have suffered increasingly poor yields.

So you can see how a slight but continuing gradient shift will alter entire ecosystems and the relationships between insects and plants. In the long term ecosystems can and do adjust to changing climates, but our agriculture and supporting infrastructure is largely optimized for last century's conditions.

I was also reminded today of the cold snap that hit the United States in February 2021 and the possibility that it was due to increased wandering of the polar vortex. This band of winds that surrounds the North Pole at altitude in the winter holds in a pool of cold air. Polar winds largely exist because of the differential between polar temperatures and temperate temperatures. Though global warming is an average, the Arctic is warming several times faster than other parts of the globe, reducing that differential. So that suggests that, paradoxically, global warming can bring colder winters to some regions in some years, though the climate.gov article on the polar vortex notes that the question remains unresolved.

A news article fro April 18, 2022, 1.5 vs 2C: What difference can a lousy half a degree of global warming make?, makes reference to the article, Realization of Paris Agreement pledges may limit warming just below 2 °C published in Nature Magazine. It quantifies the affects of the difference, this way:

A report by Carbon Brief, which analysed 70 research papers comparing 1.5 °C and 2 °C , found that globally we can expect an average of about 56 centimetres of sea level rise this century at 2°C — but up to 96cm in the worst-case scenario.

That extra 10cm, according to the IPCC, is expected to impact an extra 10.4 million people, either directly through inundation of coastal homes or through crippling of food-growing lands and livelihoods.

Many of those 10.4 million, including residents of some of the low-lying islands of our Pacific region, are expected to become climate refugees.

Sea-level rise doesn't happen equally around the globe. One variable is what is called gravitational self-attraction.

Things with mass have gravity, and things with huge mass like the Greenland and Antarctic ice sheets have enough gravity that they pull the oceans towards them.

As their mass is reduced, the seas will settle out towards the lower latitudes, causing more substantial rises around the tropics and sub-tropics

At 1.5°C , the Northern Hemisphere can also expect an ice-free Arctic summer around every once in 33 years, rising to around once every seven years at 2°C (and nearly two in every three years at 3°C ).

Though weather varies regionally, on average we can expect longer, more intense droughts, longer, hotter heatwaves and fewer but more extreme rainfall events at both 1.5°C and 2°C .

Just over a seventh of the world's population will face a severe heat wave at least once in five years at 1.5°C , but that jumps to more than a third at 2°C , and the frequency of warm extremes jumps by 343 per cent at 2°C .

An extra 62 million people will be exposed to drought each year if we reach 2°C , compared to 1.5°C .

At 2°C , an extra 12 million people are expected to be flooded in coastal areas each year compared to at 1.5°C .

Not the answer you're looking for? Browse other questions tagged climate-change temperature or ask your own question.

11
How exactly is the "global average temperature" calculated and how reasonable is this method?
3
Making sense of the math of climate change
11
Relationship between natural disaster and global warming, in the media
10
Does the global temperature vary daily (hotter and colder days)?
4
Weather conditions to create significant glacier growth
3
If today's Earth becomes warmer, how will it compare to the Earth of the Cretaceous period?
1
By what objectively correct process could we determine the truth about the actual severity of anthropogenic climate change?
3
Who are winners from the global warming? Are there any?
4
Is there really less diurnal temperature variation in the mountains than at sea level?