In the northern hemisphere summer, why are places in the north cooler than those in the south?

As the Earth's axis is inclined, during summer in the northern hemisphere places in the north are exposed to the Sun's rays for longer, so days are longer during summer (say in June - Aug). Yet, countries like the UK have a lower summer temperature than countries like India, particularly given that the UK is to the north of India and has longer days in summers). I was just wondering about this. Feel free to share your insights.

The image below (apparently from "physicalgeography.net" is somewhat instructive:

Notice that even in the middle of summer, India (at about 30 °N) still gets slightly more sun than the Britain (at 60 °N). That's because although the days are longer in Britain, the sun is lower in the sky and so its heat is spread out over a wider area.

But the North Pole gets even more sun than either Britain or India in June, and the equator gets substantially less. So there is something to explain. The reason is thermal inertia. 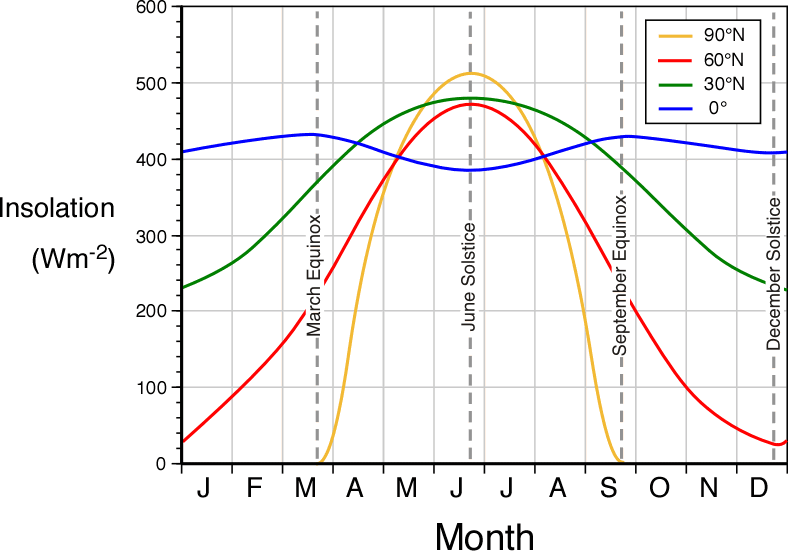 This graph shows insolation averaged over 24 hours at four different Latitudes. This shows the theoretical insolation. The model used to calculate these curves includes the effects of Earth's elliptical orbit, but do not take account of any atmospheric effects, such as the energy absorbed by the atmosphere, nor any weather effects such as clouds. It shows that a perfectly black disc with an area of 1 m² placed just above the atmosphere and oriented horizontal to the Earth surface would receive an average of about 515 Joules per second at the North Pole on June 21st and an average of about 380 Joules per second at the Equator. The main reason for the Equator value being so low is that it is night time for about 12 hours at the equator.

There are lots of details and local effects (the gulf stream in Britain, and the monsoon in India are significant) but the basic reason that India is hotter in summer is that it gets more sun in winter!

Hours of sunlight are not the only factor that determines insolation (solar energy at the surface).

Thought experiment: spread a bed sheet on the floor, switch the lights off, and shine a flashlight directly down on that bed sheet from about one foot above it. You will get a small, fairly bright spot of light on the sheet.

Now tilt the flashlight, and shine it across it at a flat angle - say, 45 or 60 degrees - still keeping it about one foot away from the spot it's illuminating. As you flatten the angle, that spot elongates to cover a larger and larger area. But the amount of light coming out of the flashlight is still the same, spread over a larger area, which means lower intensity on the sheet. The same amount of light that was previously hitting a 100 cm2 spot might now be spread across 500 cm2.

This is part of what's happening at the high latitudes. During the summer months they are getting many hours of sunlight, but they're not getting a lot of energy per square metre compared to the tropics. In early April, the North Pole is getting sunlight 24 hours a day, but much less sunlight (in terms of energy/m2 etc.) than the equator gets in 12.)

Not the answer you're looking for? Browse other questions tagged meteorology climate earth-rotation sun or ask your own question.

22
Why is March colder than September in Northern Hemisphere?

6
Was the Southern Hemisphere cooler during the Younger Dryas?
12
Is it true that distance between earth and sun is closer in winter season (January) and farther in summer season in the Northern Hemisphere?
22
Why is March colder than September in Northern Hemisphere?
11
Why is the South Pole colder than the North Pole?
6
Why are deserts hotter than other places on Earth
1
Southern Hemisphere: What is the most Northern latitude where the sun can be seen for more than 24 hours?
2
Atmospheric conditions needed that blocks all bright light during sunsets and allows you to stare directly at the sun
12
Why are mornings cooler than nights?