Clarification of dry deposition of particles

I found a formula for the dry deposition speed of particles and an electric circuit analogy to go with it. I would like some clarification on this figure: 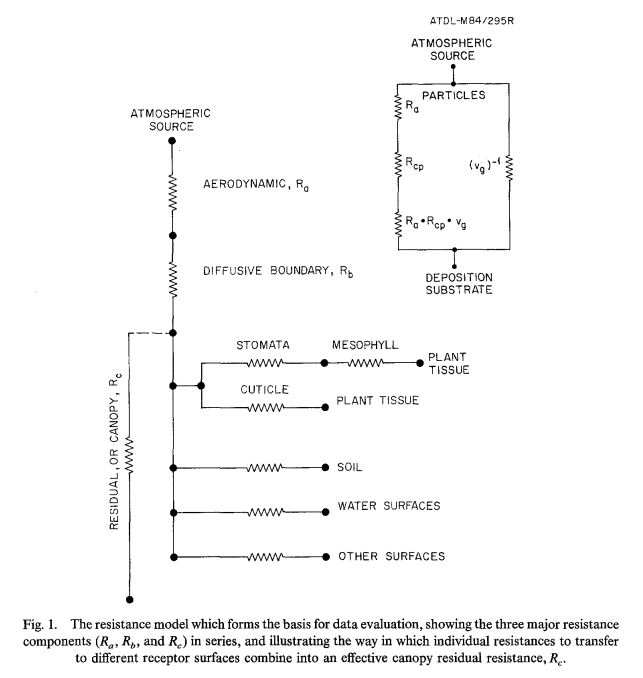 I'm mostly interested in the top right circuit. Here, $R_a$ is the aerodynamic resistance, $R_{cp}$ is an (effective) canopy resistance and $V_g$ is the gravitational settling velocity of the particles. I don't understand why there is a $V_g^{-1}$ in parallel with the other resistors and I'm not sure where the $R_a R_{cp} V_g$ comes from either. Some hints would be greatly appreciated. I got this figure from Hicks et al. 1987. The final deposition velocity would then be

which can easily be derived from the circuit above.

I'm not sure if you've gone one citation deeper into the report,

where there's more information in Appendix C on the origin of those diagrams.

They make the argument that the turbulent and gravitational (settling) deposition fluxes are separable and additive such that the total deposition velocity is,

where $F_p$ and $C$ are the particle flux and concentration, respectively. They then note that,

This simple procedure introduces a conceptual problem, however, since obviously both $v_d$ and $C$ are functions of height and $v_g$ is not.

at which point they assume two equations for $F_p$ (Eqns. C5 and C6), one for the turbulent layer and one for the canopy layer:

These can be combined to eliminate $C(z_0)$, and the result combined with the $v_p$ equation above and rearranged to yield Eq C7,

The circuit diagram you show in the top right is an expression of this equation, which shows how the traditional circuit diagram can be modified to account for turbulent transfer in the presence of gravitational settling. They note, however, that,

In practice, the triple-product term in Equation (C.7) is unlikely to be of great significance unless $v_g$ is relatively large. Detailed consideration of the ramifications is not warranted, since great uncertainty surrounds the quantity $r_{cp}$ for the case of particles.

Not the answer you're looking for? Browse other questions tagged atmosphere atmosphere-modelling air-pollution or ask your own question.

13
Dry atmospheric temperature profile (dry adiabatic vs. isothermal)
7
Why do the dry and moist adiabatic lapse rates converge with height?
7
Why is Venezuela so dry?
4
Is wind just mainly nitrogen particles moving in one direction?
19
Why doesn't the 71% water of the earth dry or evaporate?
4
Which particles are classified as PM2.5? How exactly is this defined?