Can "meanders in meanders" form naturally?

I recently rafted the San Juan river in Southern Utah, which flows into the Lake Powell reservoir. When the water levels in Lake Powell were very high, it extended far upstream into the San Juan River. This caused the river to stagnate and deposit enormous amounts of silt in the canyon.

When Lake Powell water level subsequently dropped, the river carved new meanders through the resulting silt beds, but within the much larger meanders that form the canyon. (Satellite Imagery from Google Maps) 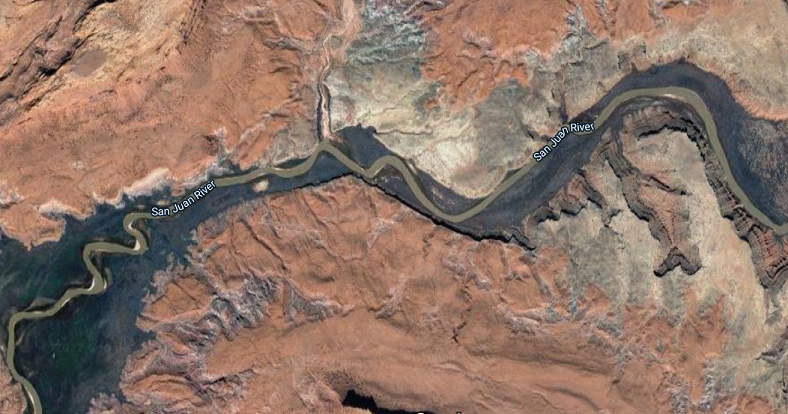 The San Juan doesn't flash flood anymore due to the flow regulation of the upstream Navajo Dam, so it hasn't been able to wash out the silt.

Apparently "meanders in meanders" is not a unique phenomenon as Anders Sandberg has also captured it here, but I don't know where he took this picture.

Question: Can "meanders in meanders" also form naturally? How does this happen? Also, if there is a more scientific name for this phenomenon, it would be helpful.

geophysics rivers erosion
Share
Improve this question
asked May 3 at 15:54

Here's an example of a river in Siberia (at about 62°08'N 83°06'E) that appears to be unimpinged by human activity. It's a bit hard to see both scales at once, but the river meanders all over the place.

I'll refer you to Peter Jansson's answer for more of an explanation, but the first order idea is that the meandering valley (the large-scale landform) forms under one set of conditions and the meandering channel (the small scale channel) under another. Those conditions might change seasonally (as in Utah) or historically (as I suspect is the case in the Siberia example).

In the case that you show there are so-called incised meanders cut into the bedrock in which material has been deposited when lake levels have been high. When lake levels have dropped the sediments and the slope of the valley is favourable for meandering.

Meandering rivers form at low slopes and in fine partially cohesive sediments. Thus the meandering patterns says much about the slope of the former lake bed and the type of sediment laid down on the lake bottom. With steeper slopes or with diffreent grain sizes, the meandering may not be the resultring river pattern.

The observation that a meandering river has developed in an old incised meandering river valley is mainly fortuitous since the present river does not require a wide valley to develop meandering. If the river would have larger discharges it likely would require a wider valley to develop such intricate meander patterns. At the same time the bedrock valley floor is likely at some depth below the current valley surface so the large scale valley meander pattern may become more complicated at depth.

A good and recent (at the time of providing the response) summary of meandering is:

Not the answer you're looking for? Browse other questions tagged geophysics rivers erosion or ask your own question.

16
How does a meandering river form?
15
How and why do these tree-like river structures form?
2
Do ice crystals form in running super-cold water?
3
What voltage and/or amps cannot be found naturally?
3
How does this melted-wax erosion pattern form in sandstone?
4
How do canyons form?