Is it possible to reliably infer the anthropogenic contribution to the post-industrial rise in $\ce{CO2}$ from $^{14}\ce{C}$ observations?

There have been several papers [failures of the review process] that have argued that the post-industrial rise in atmospheric $\ce{CO2}$ is primarily a natural phenomenon, or have sought to minimise the anthropogenic contribution. This is a recent example:

After 1750 and the onset of the industrial revolution, the anthropogenic fossil component and the non-fossil component in the total atmospheric CO2 concentration, C(t), began to increase. Despite the lack of knowledge of these two components, claims that all or most of the increase in C(t) since 1800 has been due to the anthropogenic fossil component have continued since they began in 1960 with “Keeling Curve: Increase in CO2 from burning fossil fuel.” Data and plots of annual anthropogenic fossil CO2 emissions and concentrations, C(t), published by the Energy Information Administration, are expanded in this paper. Additions include annual mean values in 1750 through 2018 of the 14C specific activity, concentrations of the two components, and their changes from values in 1750. The specific activity of 14C in the atmosphere gets reduced by a dilution effect when fossil CO2, which is devoid of 14C, enters the atmosphere. We have used the results of this effect to quantify the two components. All results covering the period from 1750 through 2018 are listed in a table and plotted in figures. These results negate claims that the increase in C(t) since 1800 has been dominated by the increase of the anthropogenic fossil component. We determined that in 2018, atmospheric anthropogenic fossil CO2 represented 23% of the total emissions since 1750 with the remaining 77% in the exchange reservoirs. Our results show that the percentage of the total CO2 due to the use of fossil fuels from 1750 to 2018 increased from 0% in 1750 to 12% in 2018, much too low to be the cause of global warming.

$\color{red}{\star}$ Is it possible to reliably infer the anthropogenic contribution to the post-industrial rise in atmospheric $\ce{CO2}$ from $^{14}\ce{C}$ observations?

A reference to a paper where this is demonstrated would be greatly appreciated!

The NOAA has used carbon-14 to identify local sources of anthropogenic carbon dioxide, which would suffer less interference from factors acting elsewhere around the globe, such as nuclear testing. The map below, showing yellow and red areas where the near-surface atmosphere is depleted of carbon-14, matches with the most densely populated and heavily industrialized areas of North America. 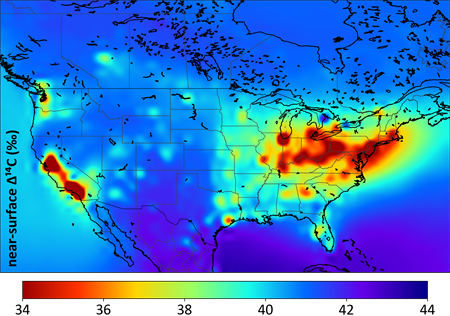 13
How will increased $\ce{CO2}$ affect forests and other vegetative areas?
58
How many trees would I have to plant to solve Global Warming?
15
How did plants adapt to $\small\sf{CO_2}$ levels past 400k years? Why won't they do it again?
4
What evidence is backing the claim that the CO₂ we're releasing in the atmosphere is the main cause of climate change?
2
Net fluxes of carbon caused by humans
1
Does extrapolating current CO2 trends indicate 7632 PPM CO2 and 14C temperature anomaly within 200 years?
3
Would pollution really take a lot of years to disappear from the atmosphere once people stop producing them?