Are the physics of the earth and tropical systems such that it is impossible for a hurricane to cross the equator after forming, or are the forces working against this occurring so strong that an equator crossing hurricane is an exceedingly rare event we may not witness in 1000+ years? 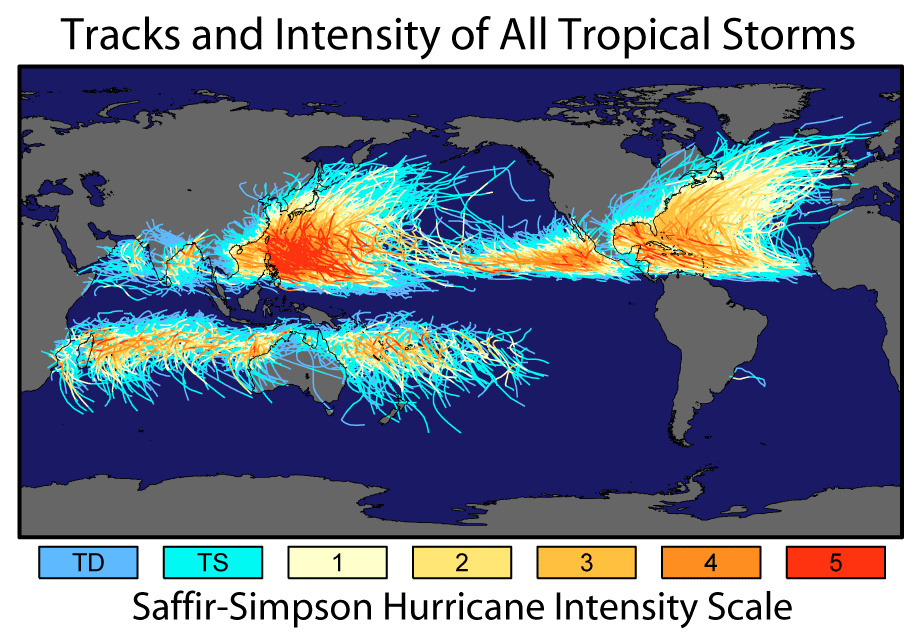 It is well known that the Coriolis force is needed to form a hurricane, and the figure of 5oN/S as the minimum for formation is widely publicized. You can also find record of tropical storm formation near India as far south as 1.4oN.

The problem of crossing the Equator isn't one of hurricane formation though, it is one of hurricane motion. Due to Coriolis, a hurricane initially moving parallel to the Equator will start gaining a poleward component to its motion, thus moving it away from the Equator. But, because this is due to Coriolis, if you could get a storm close enough to the Equator, this effect would not be as strong. This would be an improbable track, but I'm not willing to call it impossible. We haven't had satellites all that long, and all we can really say is that it hasn't happened since we've been watching.

If a storm did cross the equator though, what would it do? Nothing at first, but as it moved further into the opposite hemisphere, Coriolis would be working against the storm and it would spin down, become disorganized and cease to be a hurricane, probably becoming a remnant low.

A tropical disturbance has crossed the equator. One such disturbance occurred June 27, 2008 in the Atlantic basin (south to north) that retained its clockwise motion for some time:

The Coriolis effect is necessary for FORMATION but NOT for MAINTENANCE of a tropical cyclone.

Once formed, in a full-fledged tropical cyclone of hurricane intensity the wind balance is cyclostrophic, between the pressure-gradient and centrifugal force, with the Coriolis effect negligible by comparison.

Its circulation would be classified as baric before crossing the equator and antibaric afterwards. Thus a full-fledged tropical cyclone of hurricane intensity will NOT weaken upon crossing the equator due to the reversed Coriolis effect (although it may weaken or strengthen due to other causes).

An antibaric cyclone is fully consistent with the laws of motion. Except on the smallest scales such as dust devils or whirlpools it is difficult to initiate, but once initiated it can be stable.

A tropical cyclone crossing the equator may be the only way that a synoptic-scale antibaric cyclone can be initiated. If a tropical cyclone, especially a large one, crosses the equator and attains appreciable latitude in the opposite hemisphere, say the outer tropics or lower middle latitudes, then the gradient wind approximation rather than the cyclostrophic wind approximation is applicable.

Thus for a given pressure gradient and radius of curvature of the isobars, the centrifugal force must be stronger, and hence the wind speed higher, for an antibaric tropical cyclone than for a baric one.

This does not mean that a tropical cyclone must intensify if it crosses the equator. Whether baric or anitbaric, its intensity is determined by the available energy or exergy corresponding to the sea-surface and tropopause temperatures (with possible deductions for wind shear, entrainment of dry air, land interaction, etc.)

The First and Second Laws of Thermodynamics require that the pressure gradient and radius of curvature of the isobars must adjust to the exergy supply --- not vice versa.

Whether at some latitude in the opposite hemisphere it becomes absolutely impossible may be an open question.

Small-scale antibaric cyclones (dust devils, whirlpools, waterspouts, and to a lesser extent tornadoes) can easily exist at any any latitude where sufficient exergy exists to generate and maintain them.

Here is an archived comment on NASA’s Earth Observatory website, regarding an estimated once in 100-400 years equatorial cyclone – typhoon Varmei in December 2001.

Not the answer you're looking for? Browse other questions tagged meteorology coriolis tropical-cyclone equator or ask your own question.

0
Can a hurricane with different spinning direction be formed accidently?
5
What is the largest hurricane possible?

17
Why is the troposphere 8km higher at the equator than the poles?
6
Minimum sea-level pressure and maximum wind speed intensity relationship in Hurricane Katrina (2005)
1
When there is snow on the ground, can a hurricane still form?
1
Equator and Hours of Daylight
2
Ways, Through Science, to Counteract Hurricane Forces?
2
Human hurricane forecasting?
10
Has a hurricane or cyclone ever reformed after passing over a large land mass?
5
What is the largest hurricane possible?
14
Why did Hurricane Ida have so much precipitation when it reached the Northeast?