Does the Plate tectonics contradict the theory of continental drift?

According to the theory of continental drift, South America and Africa was so closed to each other that the convex triangle of South America meets the concave hollow of Africa. 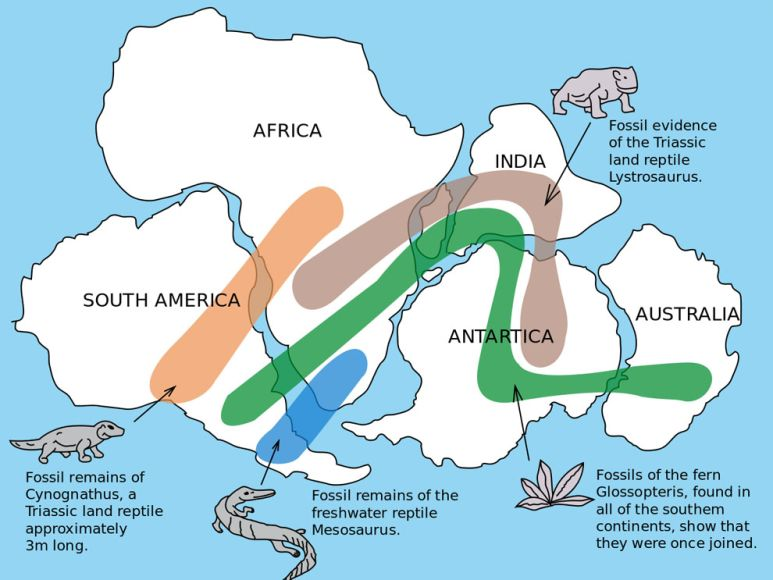 Source: usgs.gov; this image is in the public domain 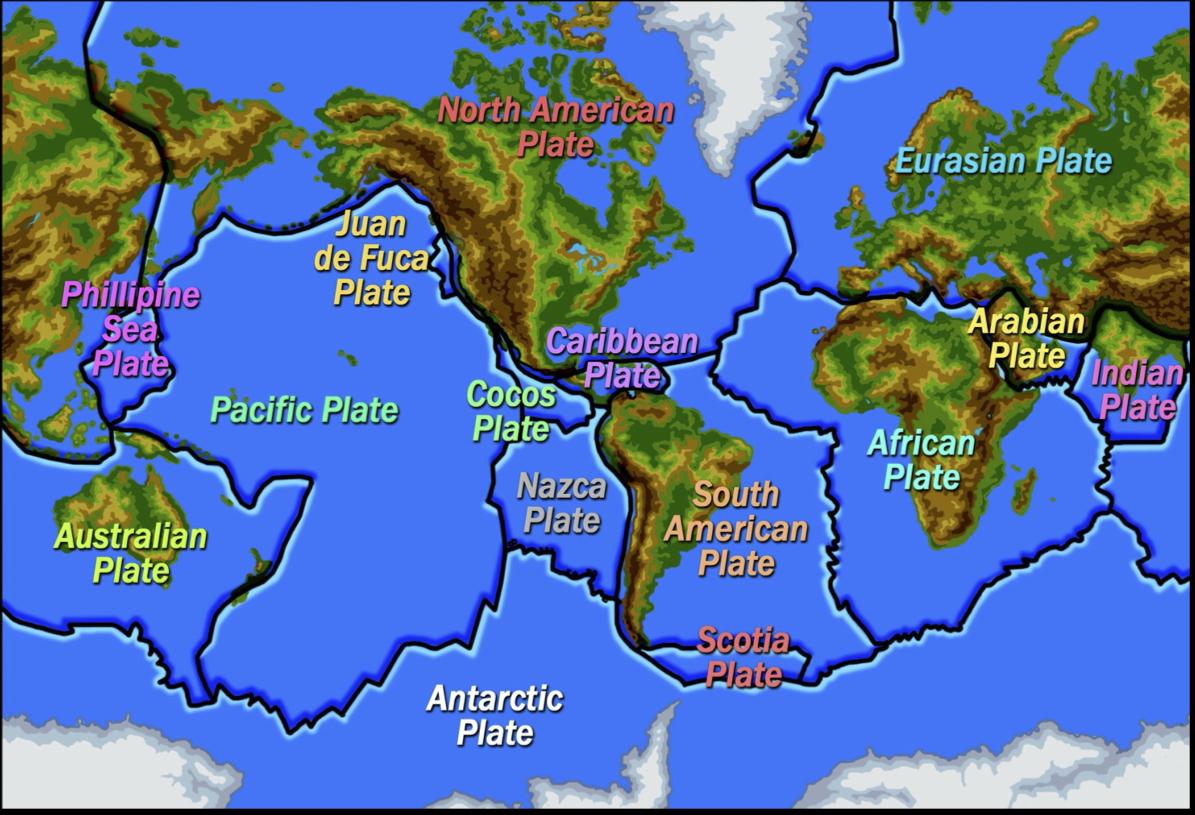 Source: noaa.gov; this image is in the public domain

If these 2 plates were near to each other so that the two lands meet, where did the space A and B go? I think there are only 2 possibilities:

Both possibilities imply that South America and Africa can't join together to form a whole land. Do the two theories just contradict each other?

Wegener was hardly the first to see that the continents fit together like pieces of a jigsaw puzzle. What Wegener added was fossil evidence that at some time in the past those jigsaw puzzle pieces must have fit together. What his theory did not have was a mechanism. He posited that continents somehow plow their way through or over oceanic crust. He had no mechanism.

If these 2 plates were near to each other so that the two lands meet, where did the space A and B go? I think there are only 2 possibilities:

You are missing a third possibility, which is that the spaces you are calling A and B didn't always exist. This is exactly what plate tectonic theory says has happened. New oceanic crust is created by volcanism at the mid-ocean ridge. This newly formed oceanic crust is one of the key mechanisms by which continents move. Another key mechanism is subduction. Oceanic crust sinks into the mantle at subduction zones.

These two mechanisms mean that most oceanic crust is fairly young, less than 200 million years old. The oldest oceanic crust is probably the Herodotus Basin in the Mediterranean Sea, estimated to be about 340 million years old. In many ways, it's best to view the Mediterranean Sea as a remnant of the old Tethys Ocean rather than as an arm of the Atlantic Ocean.

The space we currently see between South America and Africa did not exist when the supercontinent Pangaea existed. Rift valleys formed that started to split the supercontinent into pieces. These rift valleys eventually became the sites of new oceanic ridges, and the space between the split-apart continents became new ocean such as the Atlantic Ocean.

"Continental Drift" was a theory developed to explain observed phenomena (the coastline of South America and Africa being but one example). Plate tectonics, on the other hand, is the mechanism that explains how that movement is physically brought about. The latter simply supplanted the former, rather than the two being in any sort of tension.

I just wanted to augment the other answers with some pictures. Not only there isn't a contradiction, but plate tectonics confirms and explains continental drift. It's the mechanism by which continental drift happens. 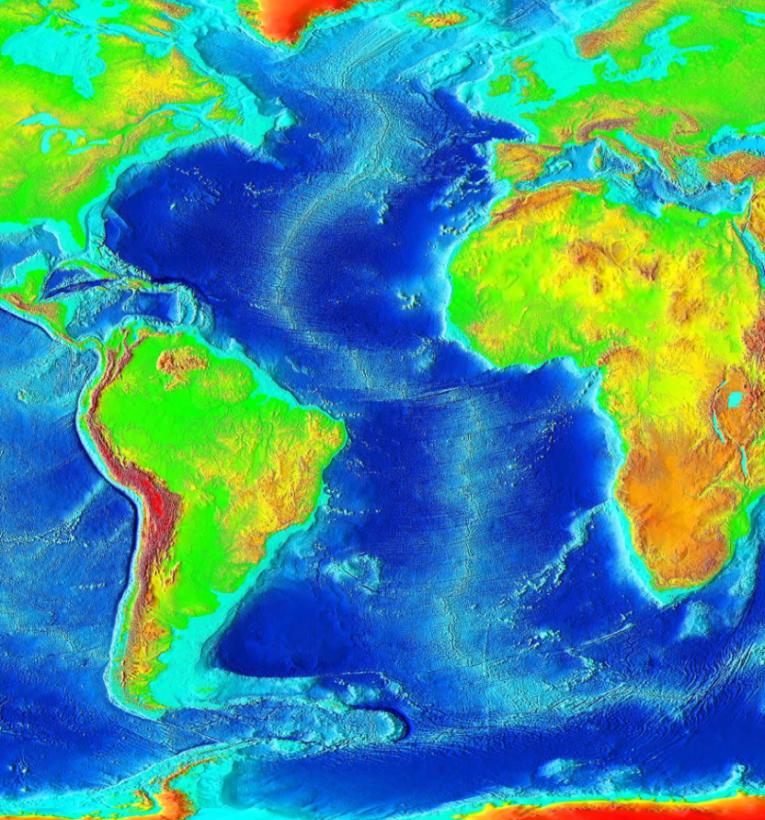 The oceanic crust between South America and Africa didn't exist when the two continents were joined. It is younger than both continents, and it is spreading away from the Mid-Atlantic Ridge even today. Note that the ridge itself has a similar shape to the continent outlines. This is termed a divergent plate boundary.

The youngest part of the oceanic crust is at the center (near the ridge), and it gets older and older as you move away towards the continent on either side. So at the center, it's very recent, while at the edges its hundreds of millions of years old (mostly < 200 Myr).

In contrast, the average age of the continental crust is about 2 billion years, with some parts of continents having been there for more than 4 billion years (so 10-20+ times older). 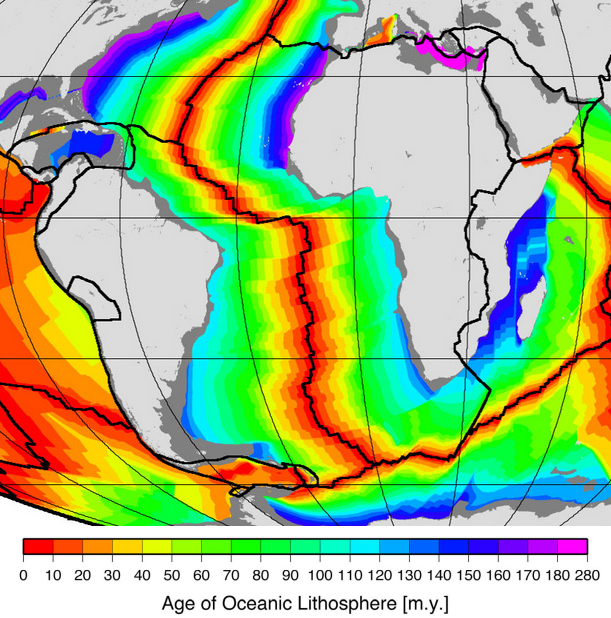 P.S. An example of a relatively young divergent boundary is the Red Sea; the spreading apart of the African Plate and the Arabian Plate created the Red Sea basin. 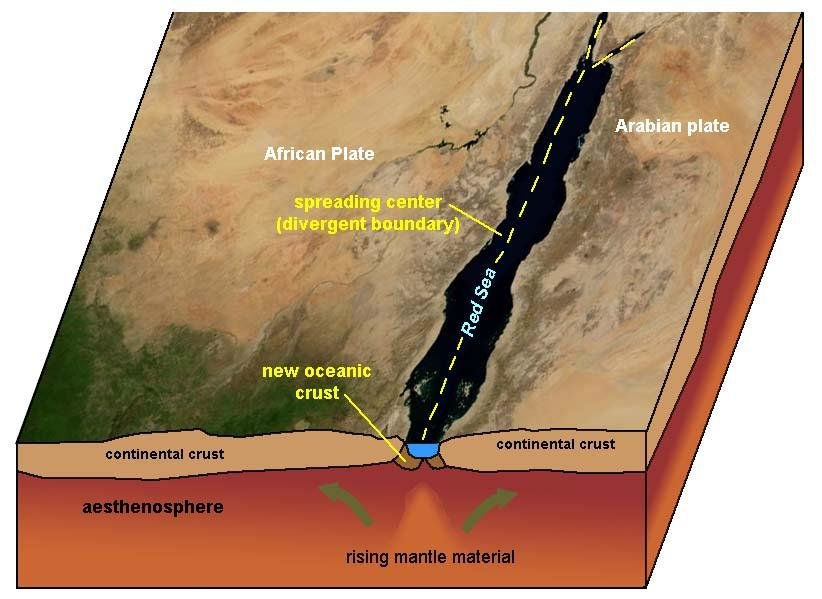 See also:
More info on the Red Sea Rift
For an example of a plate currently in the process of splitting into two new plates: East African Rift

Not the answer you're looking for? Browse other questions tagged plate-tectonics earth-history or ask your own question.