At what latitudes does the precipitation water for Europe evaporate?

I'm currently wondering at what latitudes the precipitation water for Europe evaporates. For some reason I can hardly find any data on where the source of the vapour can be, which is then transported to Europe by advection with the westerly winds. Do you know any reliable sources or, even better, online models?

A challenge is going to be "which moisture is from where". Because the atmosphere doesn't ever completely empty of moisture, for any given precipitation, which water molecules were from which spot?

But a satellite loop of precipitable water (the amount of water vapor in the tropospheric column) like the MIMIC-TPW2 one from CIMMS-Wisconsin should help to shed light on your question. Basically looking at the animation the lion's share of the moisture making it to Europe looks to be a mix of nearer northern Atlantic moisture -- particularly from the warmer Gulf Stream -- and then additional wider-scale evaporation nearer the ITCZ closer to the Equator in the Atlantic plus sub-basins like the Caribbean and Gulf of Mexico. 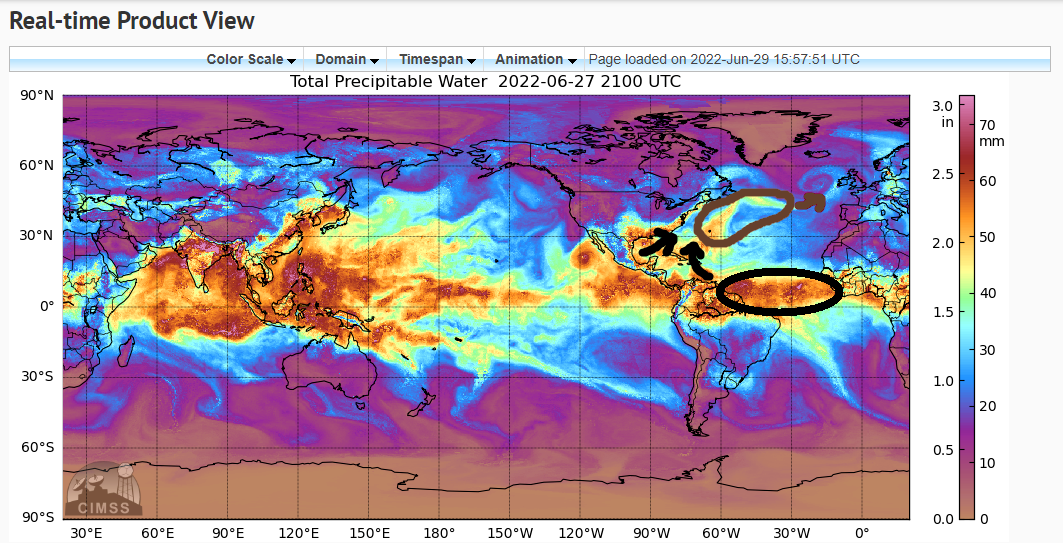 Perhaps a bit more is from more local areas when winds are reduced, and a bit more distant during cooler parts of the year when the jet stream is more active. But I am confident that overall meteorologically these source areas would be rather consistently dominant throughout the year, as hinted at in this image of annual oceanic latent heat flux shows: 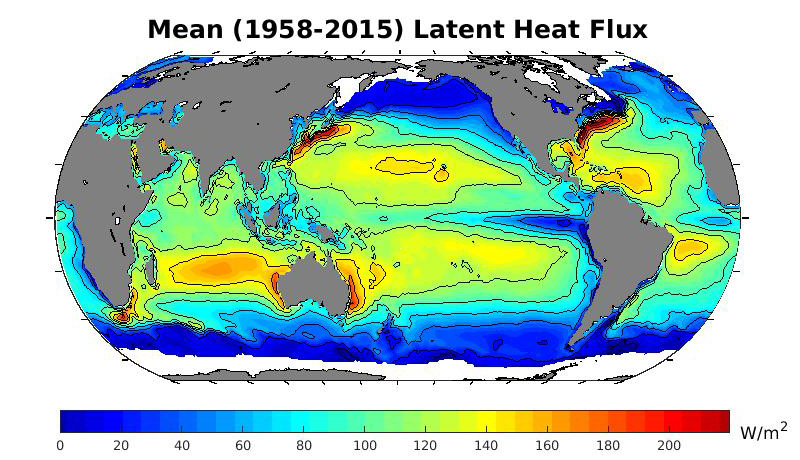 That image, plus a close look at the animation, both seem to hint that the greatest percentage of your moisture tends to come from latitudes more like 30 north. I might have thought it was more equally balanced with the deeper tropics. Either way it's going to be the region roughly between the Equator and about 40 North where the vast majority of your moisture comes from, as that's where SSTs are much warmer... with the moisture carrying capacity of air almost doubling between 20°C and 30°C (and again between 10°C and 20°C), meaning that SSTs and air (low) temperatures nearer 25-30°C bring much more significant amounts of moisture.

I recently became aware of this dataset and paper, which I think is the sort of thing you're looking for:

From which we have Figure 1: The UTrack atmospheric moisture tracking model. (a) The model tracks evaporation through the atmosphere from source cells to target cells using a Lagrangian moisture tracking scheme forced with ERA5 reanalysis data. (b) An example of an “evaporation footprint”, or “evaporation shed”, from the UTrack model. (c) An example of a “precipitation footprint”, or “precipitation shed”:

I must admit I haven't looked into the data yet, so I don't know how easy it is to use.

Not the answer you're looking for? Browse other questions tagged meteorology precipitation evaporation or ask your own question.

16
What is the methodology to analyze future climatic extremes using the results of climate models?
6
Where can I get historic hourly precipitation data for Italy?
9
Where did the daily temperature variation go?
3
Is there a maximum size for a single snowflake?
5
How is heavy rainfall determined in National Climate Assessment
2
Creating a drought metric using precipitation data?
3
difference between different meteorological models
3
How accurate is ERA5 weather data?