How will climate change affect the 3D distribution of lapse rate in the atmosphere?

The lapse rate is the rate at which temperature decreases with height. By "3D" distribution, I mean distribution across all latitudes, longitudes, and heights.

Would climate change change the lapse rate more in the poles than the tropics? Would increased humidity be the main reason, or could there be other causes as well?

Stone and Carlson, 1978 suggest that lapse rate is dependent on latitude (i.e. incidence angle and intensity of sunlight) and pressure rather than temperature. It is the sunlight pattern which drives the circulation patterns that are the dominant effect of air temperature with altitude:

The latitude determines daily changes in temperature due to solar energy. This leads me to believe that changes in average temperature (due to climate change) will not affect lapse rate so much as solar incidence due to latitude (which will not change with global warming). However, there remains the potential effect of increased humidity caused by increased temperatures.

An analysis of lapse rate measurements over broken terrain in Washington state (Minder, Mote, Lundquist, 2010) shows the differences between wetter and dryer conditions on the windward and leeward sides of Mt. Ranier. A calculation of lapse rate up the mountain by season yields this chart: 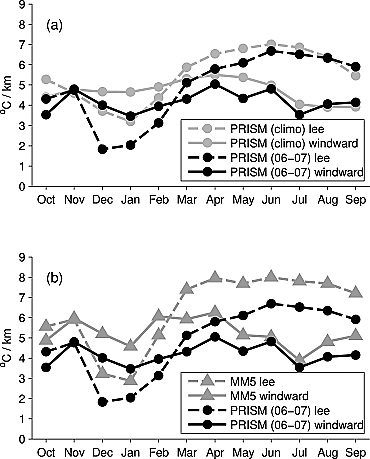 There are three distinct data sets: the solid black is the same on both a. and b. and is the measurements in 2006-2007 of lapse rate by month. The grey with circles data set from a. and grey with triangles from b. are two historical data sets from different sources. The dashed lines in each data set are on the leeward (dry) side of the mountain, the solid lies on the windward (wet).

As you can see, the seasonal variance is present in all three datasets; as the sun comes more nearly overhead in the summer lapse rate goes up. Also notice that for the leeward data, the lapse rate peaks in Jun, when the sun is highest in the sky, as opposed to July and August, when temperatures are high. That reinforces the thesis that sun angle is dominant over temperature.

However, the other bit of relevant data is that the wet side of the mountains has significantly less annual variability in lapse rate than the dry side. This implies that humidity changes due to global warming will indeed cause changes in lapse rate.

So to answer the question directly, the '3D' changes in lapse rate will probably not be significant, in that there will not be a clear global trend across all latitudes, longitudes, and altitudes. However, local changes may be significant depending on local humidity changes.

3
How does the existence of a Greenhouse Gas Effect (GHE) in the atmosphere affect the tropospheric lapse rate?

4
How does the lapse rate in clouds compare with the lapse rate of air?
6
How will climate change affect the latitudinal distribution of precipitation over each latitudinal region?
8
Could Global Climate Change increase the average moisture in the air?
4
What evidence is backing the claim that the CO₂ we're releasing in the atmosphere is the main cause of climate change?
1
By what objectively correct process could we determine the truth about the actual severity of anthropogenic climate change?
2
Would freezing the ocean and storing the ice in the poles reduce effects of climate change or sea level?