Is the Earth's hot inner core necessary for life? 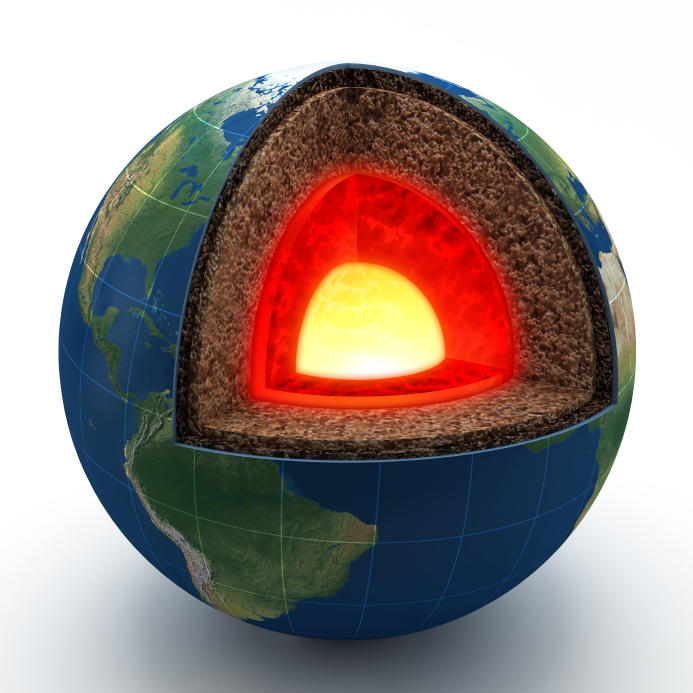 Whether the high temperatures of the core is strictly necessary to maintain a habitable temperature at the surface I'm not sure, as the global temperatures are largely controlled by insolation and the greenhouse effect. The black-body radiation temperature of the Earth is about -18 °C, and even a more realistic estimate of the surface temperature without an atmosphere is around 1 °C [1]. That being said, it depends on what you define as life, if the Earth had no atmosphere the temperature would have been lower, but organisms would have adapted to that if they existed in the first place.

As Neo and winwaed also mentioned, the molten iron in the core does protect organisms against harmful radiation from the sun, by providing the Earth with a shielding magnetic field.

Also, the hot core and mantle most likely did influence the origin of life to begin with, as near hydrothermal vents in the ocean floor conditions might have been or are suitable for spontaneous reactions that lead to the formation of self-reproducing molecules [2]. Note this is not in the Darwinian sense Neo talks about (Darwin's book is called On the Origin of Species, not On the Origin of Life), but in the microbiological and geological sense.

Yes and no. The Earth's hot inner core is one of many factors that contribute to the theory of Rare Earth indirectly. Since the potential temperature difference is what drives mantle convection (well density, but density depends on both pressure and temperature), the cold lithosphere and the hot core are absolutely necessary for the development of complex life if you take Darwin's theory of evolution to be the primary driver of speciation. Though, I'm sure there are other environments where life can emerge (I'm hoping one day we will find methanogenic life on Titan, that would be cool).

As winwaed also mentioned, the hot inner core is surrounded by a chaotically convecting liquid core which produces the Earth's magnetic field, undoubtedly important to life.

Edit for further explanation on the link between evolution and the potential temperature difference between the core and lithosphere:

While this goes a bit out of my expertise, the Theory of Evolution requires a diversity of environments in which random mutations naturally give a species an advantage over another. Plate tectonics enhances this diversity, by not only transporting land to different climates but also making new ones (arc volcanism). Without the temperature difference between the core and the lithosphere, we would not have mantle convection, which is the fundamental driver of plate tectonics. So while the temperature of the core is not directly necessary for life, it has allowed for a much more diverse speciation on this planet. This, of course, has other implications (such as surviving catastrophic extinction) but those I feel are outside the scope of this question.

The earth would be dead without a molten core. There would be no volcanoes, earthquakes etc no plate tectonics. Any material eroded from mountains would eventually end up at the bottom of the sea, and then stay there. Eventually there would be no land above sea level. Erosion would continue until we are left with nothing but deep seas with little or no mineral nutrients. Not great for a rich diversity of life.

So when we hear of the natural disasters of volcanoes and earthquakes, appreciate that the very earth is alive and sustaining us.

The theory of a Gravity Induced Lapse Rate proposed by Loschmidt (1876) suggests that all planetary bodies will have a temperature gradient in their atmosphere AND in the solid structure of the planet all the way to the core. If this theory is correct then the hot inner core of planets with an atmosphere is a common feature of all such bodies. It is (we think) obviously the case that life does not form on all such bodies but only on a select few. The features of the hot core, cooler surface & gaseous atmosphere would not then be the deciding factor as to whether we have a lifeless planet or not. If we assume, like the question, that life requires a certain temperature range then the main deciding factor will be the surface temperature as we expect life to be moving, swimming or flying about pretty close to the surface (generally). The 2 main deciding factors would be distance from the star and composition of the atmosphere, next factor is probably rotational speed on axis.

Not the answer you're looking for? Browse other questions tagged climate temperature core or ask your own question.

4
What happens to the earth after volcanism/tectonics slows?
1
What is the earth's core temperature?