Why are salt domes suitable for the final disposal of nuclear waste?

I keep reading that final storage sites for nuclear waste are being built in salt domes. In the case of the German Gorleben project, the salt domes were determined to be unsuitable after prolonged investigation.

Regardless of the Gorleben case, why are salt domes preferred?

Using salt domes in which to store nuclear waste has been considered in the USA and Germany. These two countries have potentially suitable salt domes.

Factors in favor of salt domes are (Sect 12 of the reference):

Hi Salt domes have formed over a period of several million years. These salt domes are usually also very well sealed against water by a protective layer (Anhydrite) (salt dissolves in water and if the salt dome were not dry it would not exist). These drying conditions, in addition to an already existing infrastructure through salt mining, are the reason why salt domes are used as nuclear repositories. 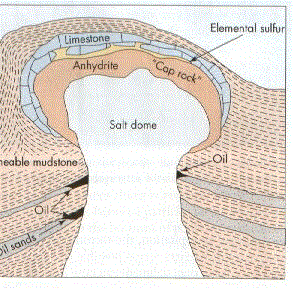 6
Why is there oil on the flanks of a salt dome?

13
What lithologies are deemed most suitable for the storage of nuclear waste
14
In what sense did the Oklo reactor "trap" its own nuclear waste?
21
Why are minerals found in "large" quantities and not scattered throughout the earth as individual atoms?
5
Why are the mountains predominately grey or dark brown?
9
Why are there no deep caves in the continental US?
2
What are the prerequisites for petroleum geology?