How to estimate a hurricane's wind speed in mph from other factors?

A formula was given by Brian Norcross but I wanted to know what others thought of this formula:

Calculating the formula's average absolute error percentage with the best-track CSV archive for the Atlantic basin gave values of: 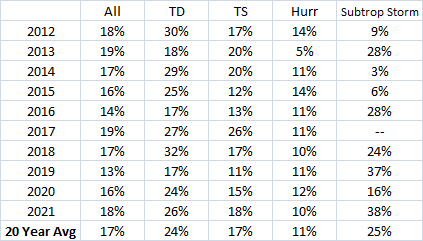 Which shows both that it is somewhat reasonable, and that its skill is still fairly limited.

Such a simplistic formula would fail to account for surrounding pressures, storm structure, and things like extratropical transition. If I remember right, there is usually a time lag, as wind speed changes more quickly (particularly after landfall!) compared to pressure, as the storm and its warm core structure take time to respond to local changes. Also, storms that are subtropical or undergoing extratropical transition have an increased chance of having dynamics-caused wind maxima far removed from the MSLP center. Those reasons line up with the greater error in the columns for subtropical systems and tropical depressions (and it also looks like in skimming through the full results that there is probably larger errors later in a storm's life)

The applicability of this formula would be challenging... because we can't know the true minimum central pressure without direct observations anyways. You could use it when looking at models... but they're already just models, so it doesn't seem there's good reason to get precise with windspeed guesses. The models forecast wind as well. Model wind speed forecasts often won't line up with reality due to resolution and continuity constraints, but that's true of MSLP estimates as well.

And we already have solid, well-refined options for analyzing storms when direct observations (like NOAA aircraft with their scatterometers, aircraft radar, and dropwindsondes to much better investigate reality... or stations/buoys/land-based radars) are limited: the Dvorak Technique, which uses satellite presentation and trends to estimate the intensity. An Evaluation of Dvorak Technique–Based Tropical Cyclone Intensity Estimates by Knaff et al. shows Dvorak errors (by comparing to storms with recon data) continue to average less than 10 knots.

So in the end the formula is just a novelty exercise to try to find a way to hyper-simplify complex things (similar to this SE question on forecasting the weather), and simply verifies that lower local pressures do tend towards greater winds (as would make sense from the full Navier-Stokes equations, as they have the pressure gradient force terms, and lower pressures tend to mean more pressure gradient). But not sure it has extensive applications.

3
Weather forecast based on pressure, temperature and humidity only (for implementation in Arduino)

18
What is the range of possible atmospheric pressures on the surface of the Earth?
9
Evaporation loss formulas
10
Have two hurricanes ever merged? And what was the result?
1
How to find/calculate the yearly evaporation of a given area?
6
Could we cool the ocean by reflecting away sunlight to influence hurricanes?
8
How to calculate relative humidity from temperature, dew point, and pressure?
3
Why exactly did the use of Greek letters as names for Hurricanes happen the first place, despite the fairly obvious and predictable impracticalities?
6
What factor(s) could cause this sort of temperature increase, mid-night/early morning?