How did this rock dome (pictured) form?

I saw this rock formation near Hveravellir, Iceland. It is probably of volcanic origin and looks like a dome. It is nearly symmetric and appears to consist of hardened lava maybe, with several very big cracks that divide it into sections. It is quite far away from the lava flows of the old, very flat Strytur volcano that is about 2 km away.

I have several hypotheses of my own, but I am not a geologist. Could it be a small "failed volcano"? 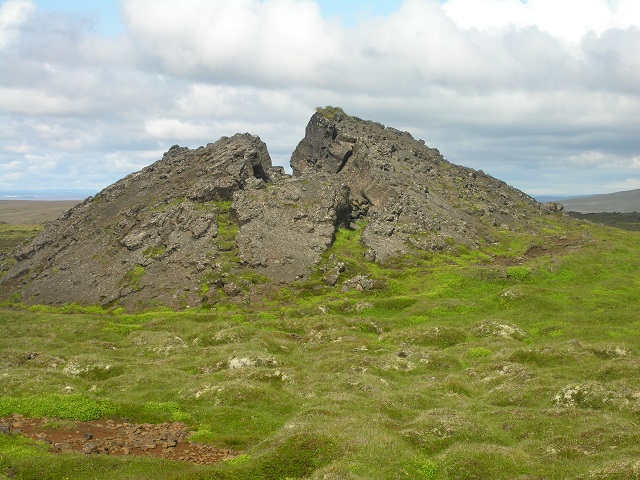 The vast majority of magma never even makes it out to the surface - most is simply crystallised at depth in magma chambers which dead-end several kilometres below the surface, or are injected as dykes or sills within the host strata.

By OrbitalPete, posted on reddit.com

If magma rose up below that mound it probably got closer than several kilometres to the surface; and the theory could be tested with one drill hole. I'm assuming the mound itself is not lava as such but bedrock that's been forced up.

This very much looks like a lava tumulus to me. Tumuli are a very common feature in pahoehoe lava flow fields. There is a classic paper by Walker (1991) describing their morphological characteristics and formation process. They are formed by inflation of the cold, stationary crust which is lifted upwards by the influx of new lava underneath. From what I see on satellite images, they seem pretty common around Hveravellir. Apparently they even hosted a famous outlaw!

Not the answer you're looking for? Browse other questions tagged volcanology evolution or ask your own question.

9
What are these "ship wrecks" (pictured) in the old volcano crater?
9
How does the composition of volcanic rock change as it makes its ascent towards the surface?
3
How do quartz veins form?
11
How did CO₂ originate on Earth before there was life?