Why doesn't earth radiate at wavelengths where there is strong absorption?

Having in mind the absorption of IR radiation by various atmospheric gases, why is there almost no outgoing radiation into space where absorption is strong? 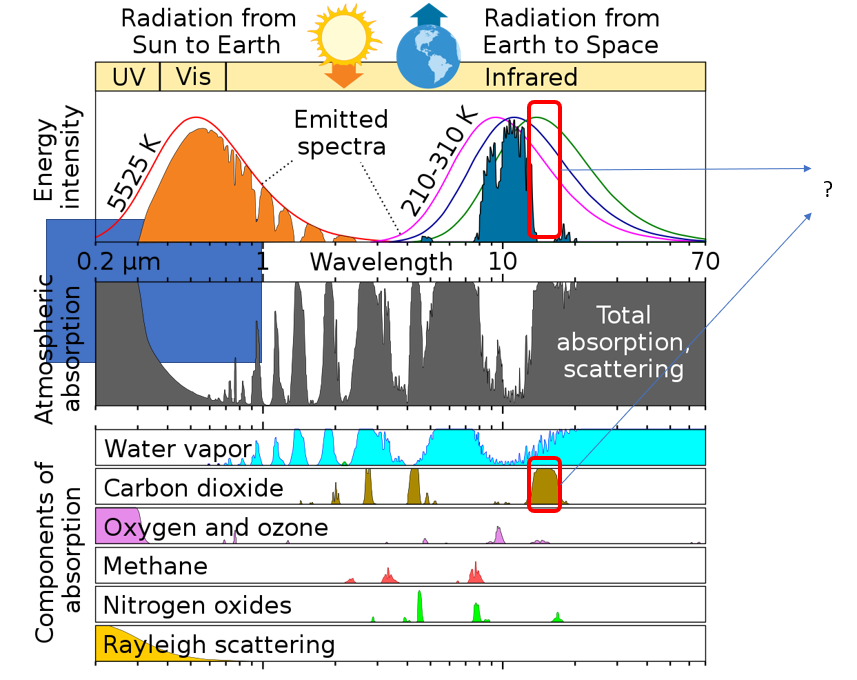 At the $CO_2$ 15um wavelength, there is almost no outgoing radiation. OK, it sounds logical, because $CO_2$ absorbs that range of radiation.

But since $CO_2$ is a good absorber, according to Kirchhoff's law it should be a good emitter at the same wavelengths.

The radiation equation in its simplest form says:

I understand that when the optical thickness is large, the outgoing radiation is dominated by the $I_\nu^B$, the Boltzmann value for black-body radiation.

But why is this the case?

Due to the large optical thickness, the outgoing radiation is emitted at stratospheric temperatures (the black-bodies indicated by ~210K temperatures).

Keep in mind that the black-bodies in the graph are scaled by their total integral, i.e. some constant $\times T^4$. Therefore, the emission surface at 210K emits at way lower fluxes than the balmy, room-temperature black-body on the surface, where the atmospheric window signal is coming from.

I guess the usual view of Earth's emission spectrum I would have can be seen in some plots here, where the 15 micron suppression is clearly visible (as is the inversion inside the feature - a telltale of the temperature structure in the atmosphere).

So TLDR: My money is on some scaling issue, as this plot is supposed to be the simple one, for public consumption.

It's a little more complicated. Most of the infrared absorption is due to water vapor. If you were to look at the IR spectrum of water vapor, you'd see a forest of individual absorption lines. In between the lines, the altitude at which you reach optical depth equals 1 is lower, and in the core of a line it's at a much higher altitude. Since temperature changes with altitude, the spectrum gets quite complicated.

When I was a grad student in astrophysics, we made observations from NASA-operated airplanes equipped with telescopes (specifically the Kuiper Airborne Observatory and the earlier, smaller Lear jet). We would fly around 40,000 feet, which was high enough at mid-latitudes to be in the stratosphere, but more importantly, it was above almost all the water vapor. Hence we were able to observe at wavelengths not accessible to ground-based observatories (in our case, 20-40 microns). During one of my oral exams, I was asked just this question - why 40,000 feet?

2
Why doesn't the earth become superheated?
20
Why doesn't the 71% water of the earth dry or evaporate?
0
Can anyone explain the reason why CO$_2$ increases global temperatures (not the simplistic greenhouse analogy provided for public consumption)?
4
How hot the earth will be if we have 20% CO2 in the atmosphere instead of ~0.04? and how cold would it be if doesn't have any CO2?
4
Why is there a window in the absorption spectrum of Earth's atmosphere at a wavelength of 4 μm?
3
Why is dependence of radiation forcing on CO2 concentration logarithmic?