Hypothetically, what would happen to the earth if a large hole was drilled through the center?

This may be a slightly unusual question. I know it wouldn't be possible, but what would the short and long term effects be, if a large (say, 1 mile diameter) round hole appeared, and went straight through the center of the earth, through the crusts on both sides. Would it be different if they opened on land, rather than ocean?

Active Oldest Votes
10
$\begingroup$
Want to improve this post? Add citations from reputable sources by editing the post. Posts with unsourced content may be edited or deleted.

The best place to ask this question is going to be at xkcd: http://what-if.xkcd.com/ but I will give it a shot.

I'm not a geophysicist, but I'll try to give you a reasonable enough answer. As you said, making such a hole is not possible.

However, let's try to think what if some magical force made a hole 1 km wide and then suddenly released it. This is what the Earth is made of: 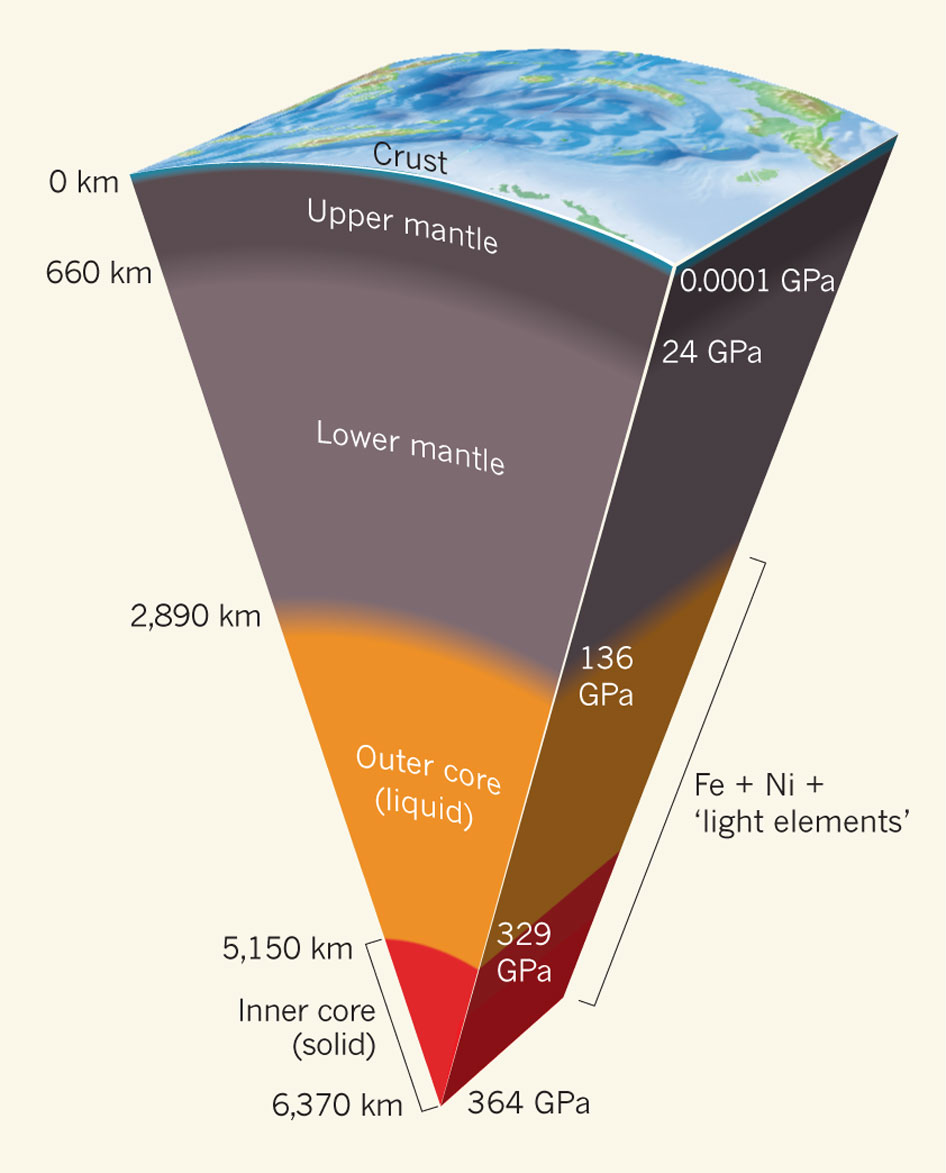 The easiest part to explain will be to see what happens in the core. Both the inner and outer core are basically made out of impure iron. The liquid iron will just flow into itself and close the hole rather quickly (think about a similar hole in water). The solid iron is also ductile as there high pressures and temperatures, so it will also flow and close the hole. Think chocolate close to the melting temperature. It's still solid, but it moves. Probably some of the liquid iron will manage to flow into the hole of the solid iron, but it will then solidify because it will have to endure higher pressures.

Now, what happens at the mantle? The lower mantle is also ductile and it will also flow under the pressure. You have to remember the the walls of the hole are under huge pressures - 24 to 136 GPa according to the figure. Some things may "fall inside", but remember that it has to fall over hundreds of kilometers while the hole is only 1 km wide.

The upper mantle is where it becomes interesting. This is just thinking out loud though. The upper mantle is where magmas are being formed, and one of the reasons magma is formed is decompression. Usually this happens because of mid ocean spreading or mantle plumes, but removing one side of let's say a cube of rock is also going to decompress it somewhat. This may cause generation of magma. No worries though - I don't see any reason why it should rise to the surface. If anything at all, it's going to fall down through the hole (but not much, see above). Also, decompression may cause release of volatiles or gas, the most common being CO2 and H2O I guess, also H2S or SO2 depends exactly what is down there. Also, the movement of rocks in an area of the Earth that's not ductile anymore but rather brittle (lithosphere) is sure to cause some earthquakes. Are there earthquakes going to be dangerous for anyone? I don't know.

What would this hole look like if you peeked down? My guess that it will be filled with water. If this hole starts at the ocean, then the ocean will just flow inside and fill it. It is possible that some mega waves or tsunamis will accompany it. It will pour down until it either meets the closed rock, or just evaporates. Remember - it's pretty hot down there. It will evaporate and rise, then cool and starts raining down again and you will have a nice convective cell in the upper few kilometers of this hole.

In contrast, if this was not in the ocean but rather on land, groundwater will fill it in. I guess most of the earth has groundwater (maybe except the large deserts, but even there some water exists) that will just flow inside and create a similar convective cell.

i think that we simply do not have enough data on earth what would happen. and if such a task were even possible. as depicted by the movie The Core, there could be a crystallized structure between the core and the surface thats even impossible to dig through by conventional means. it would sound logical, given that there simply is that much pressure going on to make crystals, that an entire part of earth is made out of crystal. plus the constant shift of the earth's plates would also mean that the tunnel dug behind you would be closed off immediatly.

right now, the diagram shown above is still pure guess work. same as how the sun works, how black holes are working. we know how a bird flies and how to make electricity because we can experience it. but we havnt experienced going to the center of the earth, so we dont know yet how it works.

Not the answer you're looking for? Browse other questions tagged geology hypothetical drilling or ask your own question.

14
Can we really travel through earth's core?
1
It is possible to send a probe deep within the Earth?

28
What sort of climate zones would be present if Earth was tilted like Uranus?
41
Farthest point from the center of the Earth
18
What would be the first thing which will render the Earth uninhabitable?
11
What woud happen to me if I touched the aurora?
8
What would happen if we removed Earth's moon?
4
What would happen if Earth suddenly stopped rotating and revolving at the same time?
6
If I was to tunnel straight through a mountain, what kind of rock would I find?
1
What would people drilling through Mount Everest find?