How does the composition of volcanic rock change as it makes its ascent towards the surface?

A schematic for the fluid mechanics of a volcano is represented below. 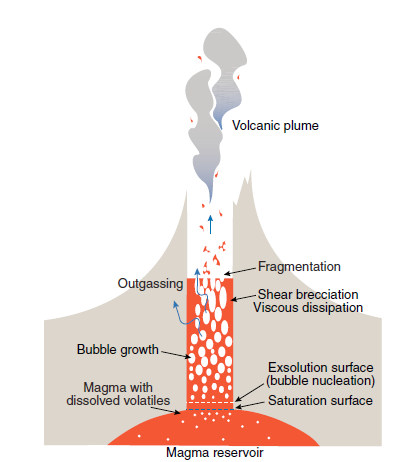 Graciously borrowed from Figure 1 of the reference cited below

From the caption of that figure:

During explosive eruptions, bubble walls rupture catastrophically at the fragmentation surface. The released gas expands rapidly and magma ascent changes from a viscous melt with suspended bubbles to a gas flow with suspended magma fragments.

My assumption is that this boundary between the magma column and the steam above it is critical to the crystallization of the minerals to form the volcanic rock.

I realize this is going to change based on the composition of the magma itself, but I'm looking for the behavior of an "average" rock species, though specific examples are great, too.

Does the composition of the volcanic rock change drastically according to the distance between the magma column and the mouth of the volcano at the time the rock is formed?

The metal composition of the magma will not change drastically. By metal I mean the basic constituents of the rock: mostly silicon but also iron, calcium, aluminum, magnesium, etc. I will add that there are processes that can affect metal composition (chiefly mineral fractionation) but I think its influence is minor when you're talking the the uppermost part of the volcano where it erupts.

What can and does change is the volatile composition. The magma is depleted of gases. Take for example a bottle of coke. When you open it, the CO2 bubbles out. The coke itself remains coke, but its chemistry changes a bit (and it tastes bad) because the CO2 is out. The magma may also change oxidation state. This, together with the volatile degassing may eventually affect the minerals that crystallise from the magma.

(Or) do the rocks melt and recrystallize frequently as the boundary moves, only attaining their final composition before they are ejected into the air?

No. Once a rock crystallises you are going to need quite a lot of energy to melt it again, and this is not a likely process to occur in a system open to the atmosphere where heat is free to leave the volcanic system.

Not the answer you're looking for? Browse other questions tagged volcanology geochemistry mineralogy or ask your own question.

11
What is the mechanism behind changes in oxidation state (of iron, for example) as magma rises?

12
Why are titanium oxides lumped in with magnetite for the purposes of analyzing water bubble nucleation?
10
How do you use the streckeisen (QAPF) classification ternary diagram to identify igneous rocks based on chemical rock composition?
8
What causes the entrainment of atmospheric gases towards a volcanic ash/tephra plume?
6
What was the likely composition of Earth's early crust (how did crustal composition evolve)?
0
How is the difference in crust and mantle composition explained?
6
How is climate change today different than the climate change that ended the ice age(s)?
1
How does fertile soil reach newborn volcanic islands?
2
How does metamorphism change talc into soapstone?
4
How much does the gravitational and magnetic fields of a planet effect the chemistry in it?