What are the factors that dictate a given topology for seismometer placement around a volcano?

The image below (borrowed from [#1]) shows the topology of the seismometers around the volcano Stromboli. 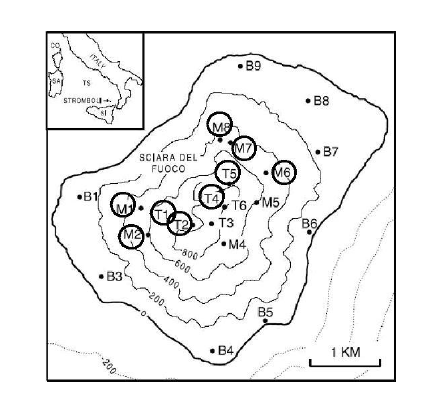 In the text, they explain the following:

The seimometers were set on the flanks of the volcano, forming three rings around the crater area at different altitudes (top, middle and bottom ring indicated on the map with the letters T, M, B, respectively). The distances of the stations from the crater zone ranged from 0.3 to 2.2 km.

A general statement about the placement of seismometers around a volcano is provided on the USGS page Monitoring Volcano Seismicity, that a significant factor in their placement is to detect 'microquakes':

Seismic networks are made up of several instruments. Having enough of the right instruments located in strategic places is especially important for detecting earthquakes smaller than magnitude 1 or 2; sometimes, these tiny earthquakes represent the only indication that a volcano is becoming restless.

They state that detection of these microquakes requires seismometers to be placed near the crater.

Placing them in rings around the volcano (in accessible and safe areas) allows scientists to accurately model the seismic changes, hence changes in the nature of the underlying magma chamber and the movement of magma and fluids.

An example is presented in the presentation Deploying a Sensor Network on an Active Volcano using Tungurahua and Reventador volcanoes in Ecuador, seismometers are typically separated by at least 100m, across and up-and-down the volcano - this allows the identification of where the movement is occurring (whether the event is from the cone or deep within the volcano).

Practically speaking, according to the article A wireless sensor network for monitoring volcanic tremors (Pereira et al. 2013), the spacing ought to be

The sensors must cover a region where the entire phenomena can be evaluated. Therefore, the coverage area must comprise, at least, one wavelength of distance between the two sensors farther away from each other. Since both the direction and speed of the tremor wave need to be estimated, at least, two sensors in each one of the cardinal points are required.

The authors emphasise the need for the networks to be flexible in terms of their location.

The authors also state that cost is a major factor - not only of the instruments, but of personnel to monitor and analyse the data.

Not the answer you're looking for? Browse other questions tagged geophysics seismology volcanology or ask your own question.

22
Are there any techniques for imaging the deep Earth besides seismic waves?
8
Are there measurement techniques that can help determine the exact geometry of a volcanic vent?
9
What are these "ship wrecks" (pictured) in the old volcano crater?
11
What efforts have been made to separate the microseismic events related to wind-related ocean waves from the components of volcanic origin?
12
What evidence is there for geological mechanisms that formed the Siberian traps flood basalt?
11
What precursor geological activity occurred prior to the Parícutin Volcano eruption in 1943?
19
Is there any consensus of what caused the Lusi Mud Volcano eruptions in Indonesia?
10
What is the geothermal potential of a volcano?
5
What drove the Puy de Dôme volcano?