What sort of climate zones would be present if Earth was tilted like Uranus?

Of course it can get a lot more complex, but these are the broad types of climate seen on Earth.

In the same, very broad sense, what types of climate would this result in, and what would they be like?

A paper on this topic just appeared: Multiple Climate States of Habitable Exoplanets: The Role of Obliquity and Irradiance.

In case of 90° obliquity, summer and winter would appear together with day and night, respectively. This means, in summer one hemisphere completely faces the Sun with 24h daylight a day causing extreme hot summers. The temperatures in winter very much depend on the hemisphere. In the Southern Hemisphere, oceans are predominant compared to the continents, having a very low albedo makes it possible to store the heat in summer. Thus, the winters in the Southern Hemisphere are still warm. In contrary, the Northern Hemisphere becomes rather cold in winter due to the small heat storage in the oceans.

The equator region is the coldest region on the planet, since this region has the lowest incoming solar radiation (Fig. 1a,b). This could lead to sea ice building around the equator region and provides an alternative hypothesis to Snowball Earth (Williams, 2008): The High Obliquity, Low-latitude Ice, STrong seasonality (HOLIST) hypothesis for pre-Ediacaran glaciation.

However, the climate also depends on the initial condition of the planet, i.e., multiple climate states are possible for the same parameters. In case of 90° obliquity either a so-called "Uncapped Cryoplanet" or an "Aquaplanet" state exists (for further details see Kilic et al., 2017). An Uncapped Cryoplanet has large areas of sea-ice around the equator and a permanent open ocean at the higher latitudes. This climate type posses a previously unknown meridional atmospheric circulation which is neither a thermally direct nor indirect cell but rather a superposition of both cell types (Fig. 1e). 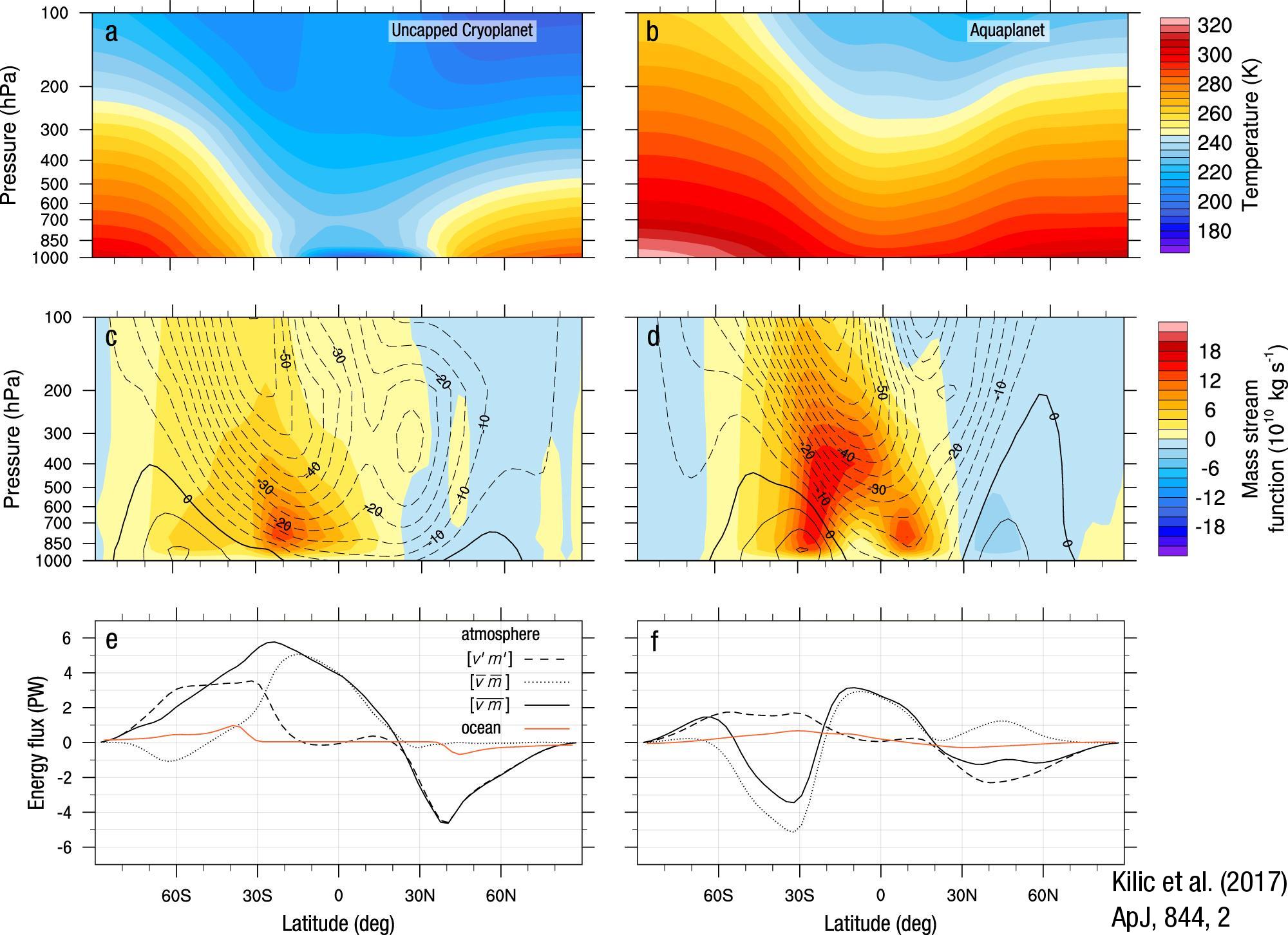 Figure 1: Uncapped Cryoplanet (left column) and the Aquaplanet (right column) for a planet with 90° obliquity in southern summer: (a), (b) zonal mean air temperature, (c), (d) mass stream function (colour, positive for clockwise overturning) and zonal-mean zonal wind (contour, positive for westerlies), and (e), (f) the poleward energy flux for the eddy and the mean contribution, the total energy flux, and the meridional heat flux in the ocean. Note: The figure shows an aquaplanet configuration, i.e., continents were neglected.

Too much tilt will cause extreme seasons, and that will lead to an extreme climate. For a planet with a tilt of 90˚ - that is, lying on its side - the Arctic and Antarctic circles coincide with the equator, and there are neither tropical nor temperate zones. Seasons are extreme indeed; over nearly half the planet the Sun would never set during the summer, and never rise during the winter. Only during spring and fall, when it would shine from the side, would the Sun rise and set as we're used to. (World-Building - By: Stephen Gillett)

In essence, the weather patterns would alternate from season to season from relatively normal, as all sides of the planet receive equal light, to extremely fierce (matching that of a tidally locked planet); however, due to the spinning of the planet, the coriolis effect would still be present.

Weather Patterns of a tidally locked planet
- At the twilight zone there would be tremendously fierce and constant windstorms as the heavier cold air rushed from the dark side to displace the lighter air warmed by the Sun.
- Additionally, the wind patterns would generally align themselves towards and away from the twilight zone.

The repeated freezing and thawing of the oceans would definitely have a profound effect on the climate, possibly permanently cooling the planet as the albedo (reflective coefficient) of ice is much greater than that of water. At the very least, it would heavily effect the ocean and air currents which play a major role in weather patterns.

Not the answer you're looking for? Browse other questions tagged climate planetary-science hypothetical or ask your own question.

8
Could Earth have had a greater axial tilt?
10
How would weather change on a tidally-locked terrestrial planet?

2
Hypothetically, what would happen to the earth if a large hole was drilled through the center?
18
What would be the first thing which will render the Earth uninhabitable?
10
Does the global temperature vary daily (hotter and colder days)?
3
Is this a contradiction in Wikipedia's definition of temperate zone?
4
What is the most optimal latitude on Earth for the generation of extreme maximum temperatures?
1
How are climate regions caused by both axial tilt and also by climate circulation cells?