What evidence is there for geological mechanisms that formed the Siberian traps flood basalt?

The Siberian Traps are the modern day remnants of the flood basalt event. Its eruptions is widely believed to be a major contributing factor of the Permo-Triassic extinction event.

In reading several sites on the matter, there seems to be two possible mechanisms (from the Wikipedia page linked above):

The source of the Siberian Traps basalt has variously been attributed to a mantle plume which impacted the base of the earth's crust and erupted through the Siberian Craton, or to processes related to plate tectonics. Another possible cause may be the impact that formed the Wilkes Land crater, which may have been contemporaneous and would have been nearly antipodal to the Traps.

The statement concludes with:

This controversial scientific debate is ongoing.

What evidence is there that would pinpoint which of these mechanisms (or any other) resulted in the Siberian Traps flood basalt eruptions?

This answer will focus on recent research evidence found within the Siberian Traps deposits. For the purposes of this answer, the theory that a possible Wilkes Land impact resulted in the Siberian traps as an antipode volcanic response will not be included (please see the question and answer to Can impact events cause widespread volcanic activity on the other side of the planet? for details of current modelling doubts of this mechanism).

Many researchers cite that the initial cause of the Siberian Traps was a mantle plume, some refer to it as a 'superplume' that inpinged into the upper mantle, as shown in the diagram below: 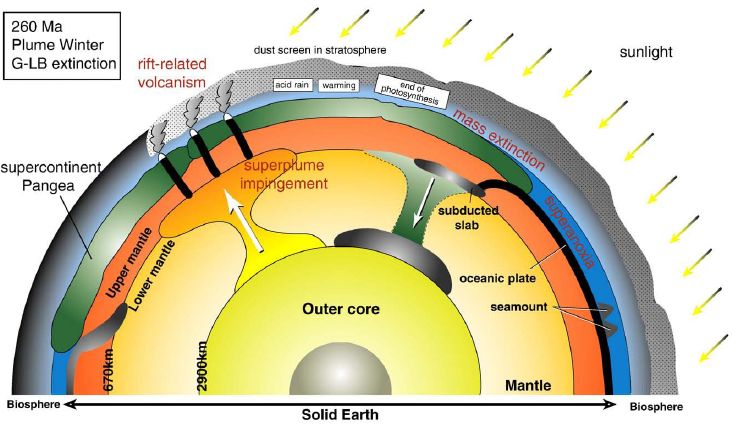 However, according to Sobolev et al. (2011), observations and measurements of the region affected by the Siberian Traps exhibit no evidence of pre-magmatic uplift nor lithospheric stretching that can be associated with mantle plume activity (e.g. the Afar Region in Ethiopia), their models suggest that there was extensive plume erosion of the cratonic crust over a considerable length of time.

Petrological evidence by Sobolev et al. (2011) suggest that some recycled oceanic crust existed at the head of the plume. This contamination was noted in $\delta^{34}\ce{S}$ analysis of melt inclusions by Bryan and Ferrari, (2013) and Black et al. (2014), who determined that the mantle melt source was close to that found in mid-ocean ridge basalts.

Black et al. (2014) also note that a significant contributor to $\delta^{34}\ce{S}$ (up to 25%) was derived from evaporitic sources. This related to the observations made by Jerram et al. (2013) of the contact metamosphism around the doleritic dykes and sills, indicating that the basaltic magma was injected into an organic and salt rich sedimentary basin. This interaction between the organics an salt and molten rock would have released halocarbons, $\ce{CO2}$ etc that are attributed to the mass extinction at the time (Jerram et al. 2013; Self et al. 2014).

This, and the prevalence of tuff leads to Jerram et al. (2013) questioning whether the Siberian Traps were the result of widespread explosive volcanic activity, related. The dyke and sill intrusions are believed to have caused episodic explosive eruptive sequences, according to Self et al. (2014). Some of these eruptions were phreatomagmatic depositing mafic volcaniclasts according to Bryan and Ferrari, (2013).

As, the crust eroded due to the plume (Sobolev et al. 2011), the eruptive sequences transitioned to basaltic lava flows, these are believed to have also been episodic, according to Self et al. (2014) with pulses of magma production and lava eruptions.

The map below shows the distribution of sill intrusions, pyroclasts and lava of the Siberian Traps. 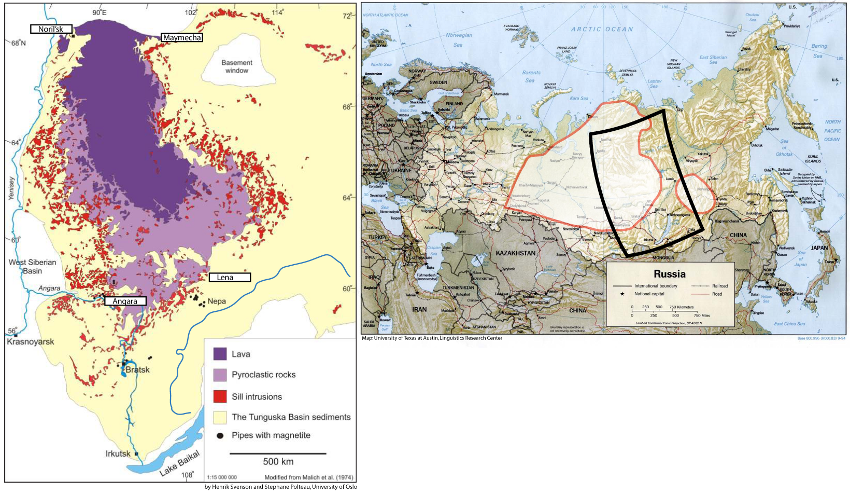 Image source: IAVCEI - the red are sill intrusions, the light purple are pyroclasts and the dark purple is lava.

Jerram et al. 2013, What happened at the start of the Siberian Traps? Understanding the onset of flood volcanism, American Geophysical Union, Fall Meeting 2013

16
Can impact events cause widespread volcanic activity on the other side of the planet?

8
Are there measurement techniques that can help determine the exact geometry of a volcanic vent?
9
What are the factors that dictate a given topology for seismometer placement around a volcano?
11
What is the mechanism behind changes in oxidation state (of iron, for example) as magma rises?
11
What geological processes affect the speed of Kilauea lava flows?
16
Can impact events cause widespread volcanic activity on the other side of the planet?
11
What precursor geological activity occurred prior to the Parícutin Volcano eruption in 1943?
19
Is there any consensus of what caused the Lusi Mud Volcano eruptions in Indonesia?
8
What caused the high temperatures that resulted in the Cretaceous aged komatiite lavas of Gorgona Island, Colombia?
16
What processes produced the basalt columns of the Giant's Causeway?
0
How big were the Siberian Traps originally?