What tectonic mechanisms cause the North and South Islands of New Zealand to be so geologically different?

New Zealand is a very active seismic and volcanic region of the Pacific Ring of Fire, on the boundary of the Australian and Pacific Plates; however, there is a difference between the 2 islands: volcanoes and earthquakes on the North Island and earthquakes only on the South Island (see maps below): 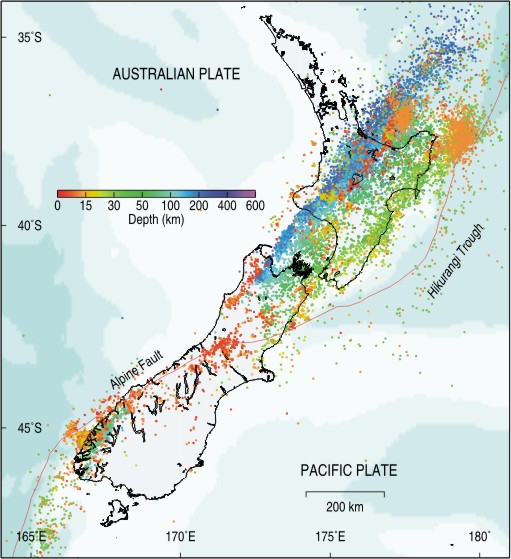 What are the tectonic features that account for the difference between the North and South Islands?

Additionally, how will this boundary develop in the future (geologically speaking)?

If this boundary was straight and the Pacific Plate moved orthogonal to it, then there would only be subduction, as the Pacific Plate is denser than the Australian. Conversely, if the Pacific Plate moved parallel to the Australia Plate there would be no subduction. Along the length of NZ both of these end-members (and variations in between!) are observed, as not only is the plate boundary slightly curved over the length of New Zealand, but the movement of the Pacific Plate has an component of clockwise rotation. Lamb (2011) shows that there has been 70-90 degrees of clockwise rotation of the boundary/margin over the last 20 million years, and it is still occuring today. The differing angles of intersection between Pacific and Australia plate along the length of NZ cause differences in tectonic style, which give rise to differences in volcanism and earthquake occurance and motion. The figure in this section of the Geology of New Zealand Wikipedia page shows the variations of displacement vector (direction and magnitude of motion) along the length of New Zealand. Notice how the vectors are more orthogonal to the plate boundary in the North Island and become more acute in the South Island.

To the south of the South Island the polarity of subduction is reversed, with the Australian Plate being subducted beneath the Pacific Plate (e.g. Randall, 2007).

This post is a huge simplification of the tectonics of NZ. The geology of this continental fragment is very complicated, but also very interesting! Have a look at this video to see how the plate boundary has changed over time.

13
Why does the "Ring of Fire" pretty much define "Pacific Rim"
21
What caused the bend in the Emperor/Hawaii chain of islands, 45 million years ago?
8
What are the geological mechanisms for sea floor spreading in the Bismarck Sea?
13
Active rifting in Antarctica?
5
What is the tectonic explanation for parallel ridges in the Arctic Ocean?
13
What are the distinguishing features of an "artificial seismic wave" (e.g. a large underground explosion)
4
What sort of a plate is the Sunda plate?