What are the causes of lower UV radiation at lower elevations?

After recently visiting the Dead Sea in Israel and not getting any skin burns, I was wondering about the reasons for that. Searching the literature, it seems that the UV radiation is indeed lower in the Dead Sea (ca. -400 m) compared to Beer Sheva (a nearby city at ca. +300 m): 1 2 3. Both UVA and UVB rays are lower, but UVB rays are attenuated the most.

These sources give mostly measurements, but hardly discuss the reasons for the lower radiation. I always thought that the ozone layer blocks most of the UV radiation, but here it seems that just a few hundred meters of atmosphere can greatly reduce the amount of incident UV.

What are the reasons for that? Is it simply because there are more air molecules that absorb the radiation?

You are almost totally correct when you asked:

What are the reasons for that? Is it simply because there are more air molecules that absorb the radiation?

The Ozone Layer blocks most of UVB, but does not affect the amount UVA entering the atmosphere (as seen in the illustration below): 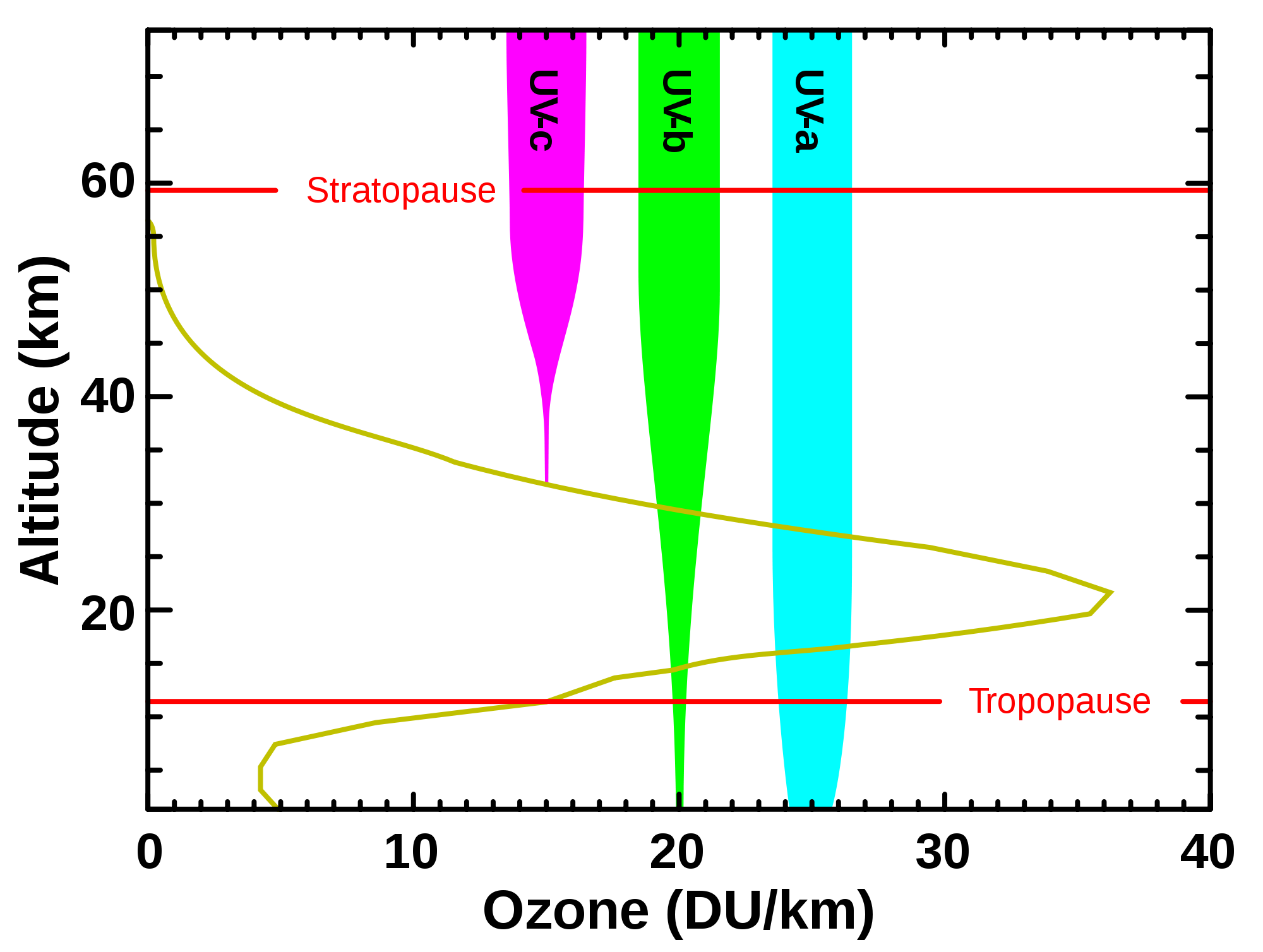 But there is a little more to it than that. From NASA's Earth Observatory's webpage What Determines How Much Ultraviolet Radiation Reaches the Earth’s Surface?, elevation's role in attenuating UVB (and by similar processes, UVA):

high elevations UV-B radiation travels through less atmosphere before it reaches the ground, and so it has fewer chances of encountering radiation-absorbing aerosols or chemical substances (such as ozone and sulfur dioxide) than it does at lower elevations.

In respect to the aerosols in area you have specified (the Dead Sea), according to the first link in your question, The Analysis of the Ultraviolet Radiation in the Dead Sea Basin, Israel (Kudish et al. 1997), they state

Their results indicate that

The relative attenuation in the ultraviolet range as a function of wavelength, i.e. site-specific spectral selectivity, decreases with increasing wavelength.

thus, indicating that the attenuation is also wavelength dependent.

Not the answer you're looking for? Browse other questions tagged atmosphere ozone topography or ask your own question.

12
What are the non-anthropogenic causes of The Netherlands' low elevation?
9
What causes the colors seen during a sunset / sunrise?
4
Is the difference in 'Summer tanning' in the Southern Hemisphere related to the Ozone hole or are there other factors?
11
What are the striations or ridges in the eastern Pacific Ocean?
4
What are the formulae for calculating the thermal heating effect of back radiation in greenhouse gases?
1
Ozone layer and radiation absorption
9
What causes the "ripples" that extend east-west along the mid-atlantic ridge?
0
Are the polar vortexes main cause of ozone hole?