Is there evidence to delineate where a southern extension of the East African Rift 'plate boundary' is developing?

The East African Rift system is described by James Wood and Alex Guth of Michigan Technological University in the Geology.com web-article East Africa's Great Rift Valley: A Complex Rift System as being a term grouping the Ethiopian Rift and both the Western and Eastern branches of the East African Rift. As shown in the image from the Tulane University web page Volcanic Landforms:

The soon-to-be-plates either side of the rift have been named the Nubian (west) and Somali (east) by many authors (as per the Wood and Guth article linked above).

The southern extent seems to lead offshore near Madagascar, which leads me to the question, what evidence is there to delineate where a southern extension of the East African Rift 'plate boundary' is developing?

There is considerable evidence that as the East African rift system is still developing, that it is not been possible to delineate southern rifting structures, which would extend into the Indian Ocean south of Madagascar. Looking at the evidence found in recent studies confirm this:

First to set the overall tectonic scene by Saemundsson (1), the East African Rift is a series of parallel rifts, particularly the east and west rift systems. Rifting is propagating southwards, with rifting rates decreasing from 2.6 cm/year in the Red Sea area to less than 0.5 mm/year south of Kenya/Tanzania.

The entire rifting region is seismically active, with seismicity extending south into Mozambique, as can be seen in the earthquake map below (2): 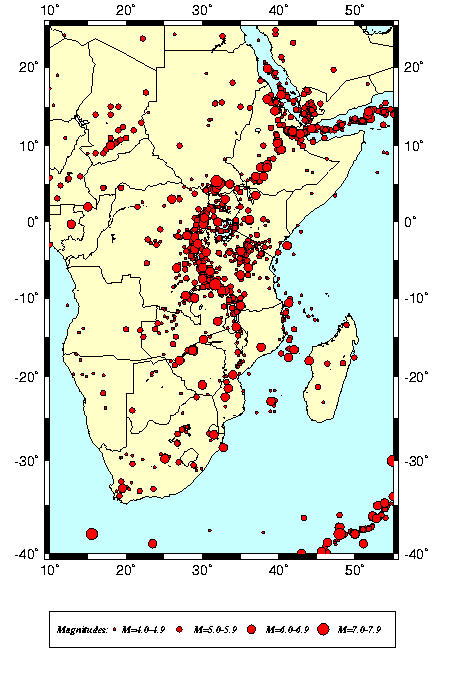 There are no recorded earthquakes extending from the African continent to the plate boundaries to the south or east.

Peter Bird, of UCLA, published observations of the stress and strain features of southern Africa, particularly as the southern extension of the East African Rift provides a unique opportunity to observe new plate boundary formation. Observational evidence provided by Bird et al (3) have found that there may be some very slow rotation of the developing 'Somali Plate' (East African plate) with respect to the 'Nubian plate' (rest of Africa) which is meeting resistance through an unbroken lithosphere - which may also partly explain the different spreading rate in the rift itself from north to south (1) (mentioned above).

The stress direction model developed by Bird et al. is shown below (3), what can be see is that the normal faulting from the East African Rift continues someway off the coast of Mozambique, becoming transversal (strike-slip), leading to a compressive feature (thrust faulting) near the plate boundary. 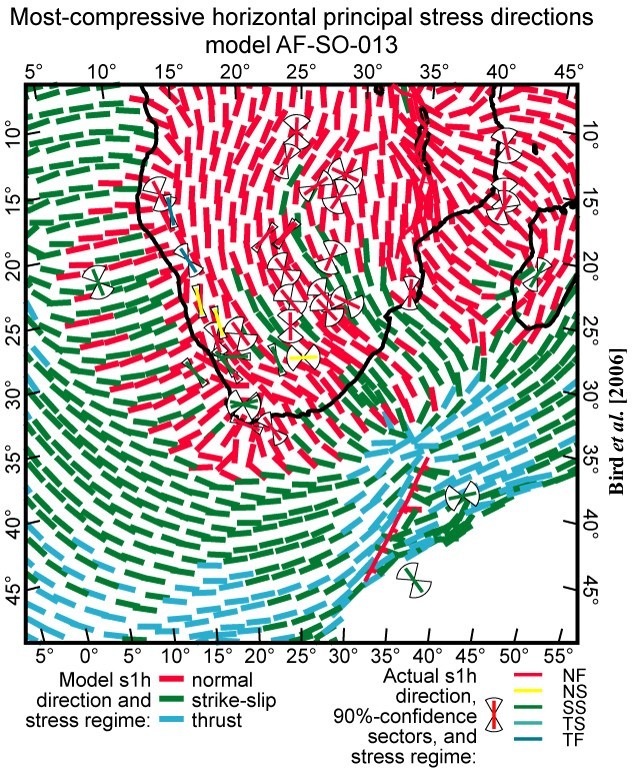 10
What tectonic structures exist on the Eurasian - North American plate boundary in eastern Siberia?
16
(Why) Is there more landmass on Earth's Northern hemisphere than the Southern Hemisphere?
9
Continental collision – evidence left of river mouths and estuaries along the boundary?
8
Has our understanding of the East African Rift significantly changed recently?
4
Is there a place where the sea floor descends into the mantle of the earth?
1
If two adjacent tectonic plates are moving in the same direction, is there significant interaction at the boundary?