How is carbon distributed among the atmosphere, the oceans, the biomass and the unburnt fossil fuels?

In relation to my other question about carbon cycle and climate change, i would like to know some estimates of the carbon distribution among the atmosphere, the oceans, the biomass and the unburnt fossil fuels.

Here are more specific parts of this question.

1.How much carbon is there on Earth?

Taken as whole, the Earth is estimated to be 730 parts per million carbon by mass.

(This could be an underestimate, depending upon what you consider to be "fossil fuel"; methane clathrates are estimated to hold $10^{16}$ kg of carbon)

The amount of carbon in the atmosphere has increased about 30% since pre-industrial times, and the amount in biomass, not including soil, has decreased about 10%. Amount in the oceans has not changed significantly.

Depiction of global carbon in gigatons (Billions of tons) 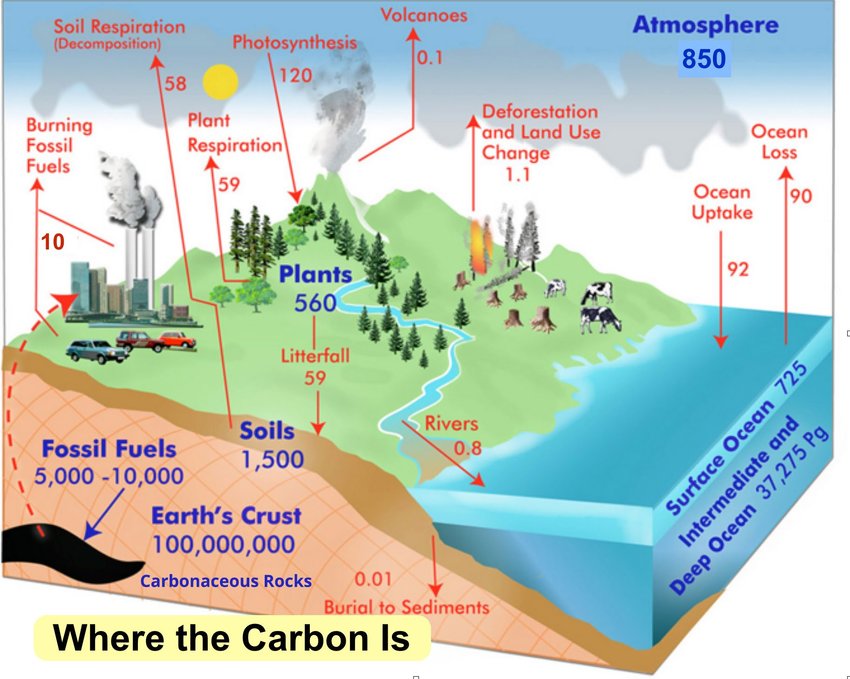 Not the answer you're looking for? Browse other questions tagged atmosphere oceanography carbon-cycle biogeochemistry biomass or ask your own question.

12
To stop anthropogenic climate change, is it necessary to stop extracting petroleum and start pumping carbon under ground?
8
What amount of permafrost carbon release could be expected with the IPCC worse-prediction of a 4.8C temperature rise?

25
How much have global GPP and biomass changed over Earth's history?
12
To stop anthropogenic climate change, is it necessary to stop extracting petroleum and start pumping carbon under ground?
14
How much of earth's molecular oxygen in the atmosphere is due to plants?
19
Why does Earth have abundant oxygen in the atmosphere?
4
What was the density and composition of Earth's atmosphere during the Cretaceous warmest period?
9
Before the Great Oxygenation Event, where was the oxygen?
1
Net fluxes of carbon caused by humans
4
How hot the earth will be if we have 20% CO2 in the atmosphere instead of ~0.04? and how cold would it be if doesn't have any CO2?
2
For a tree over its entire existence, does it actually have a net negative effect on atmospheric CO2?
4
When would the earth run out of carbon dioxide without man made climate change?