Is it possible to create an enclosed manmade weather system?

There are plenty of experiments, usually geared toward kids, that involve "making a cloud in a bottle" or something similar. These exercises are neat for what they are, but pale in comparison to the beauty of real clouds. Really you're just making fog in a bottle.

Using currently available (preferably consumer grade) technology, is it possible to create real clouds? Or even better, a real weather system? Imagine you have an enclosed 10 ft wide cube. If you build a landscape inside, complete with mountains and bodies of water, and you have complete control over the boundary conditions of the cube (temperature, airflow in/out, etc.), can you reproduce the beauty of a towering cumulus cloud inside the cube? One step further... can you create thunderstorms?

I have a very rudimentary understanding of how weather works, but the engineer in me says in theory this should be possible. But in reality a lot of small details glare out at me as possible show stoppers. Aerodynamics does not scale, because of the constant size of air molecules at all scales. I suspect this limitation may affect my weather system puzzle as well. Also with respect to thunderstorms, I suspect the 10 ft wide cube may not be able to mimic the role of planetary grounding, atmosphere, etc., in the creation of electric discharges.

Real clouds are beautiful because they are huge and you observe them from far away, thereby gaining the ability to see a distinct "boundary" and, therefore, shape. But if you ever travel through a cloud in a plane, thereby seeing one close up, you'll find that they really are "just fog". You'd struggle to recreate a scale cloud in a tiny environment; water molecules have a reasonably consistent size and you can't just downscale the entire system.

Similarly, you could probably create a thunderstorm but at that scale it would be over so fast you'd barely see it. An obvious example is the movement of water droplets as steam leaves your kettle and condenses. You just see a quick whoosh of vapour particles spiralling about and, well, that's about as close to a rainstorm as you'll get.

Some phenomena, such as air vortices, can manifest at smaller scales — I've seen more than a few mini-tornados forming in my garden dragging leaves around in a funnel fashion — but I'm not sure you'd ever be able to contain enough energy to see that happen for more than a fraction of a second in a small tube.

One of quite elegant physical demonstrations by Robert W. Wood involved re-creating a tornado in a lecture hall.

I recall reading on a couple of occasions how a very large NASA hangar exhibited a phenomenon of 'raining indoors.' It was no roof leak, either, because it could be a cloudless night and it would still happen. Supposedly, there were actually clouds forming inside the building.

Here is an article about it: 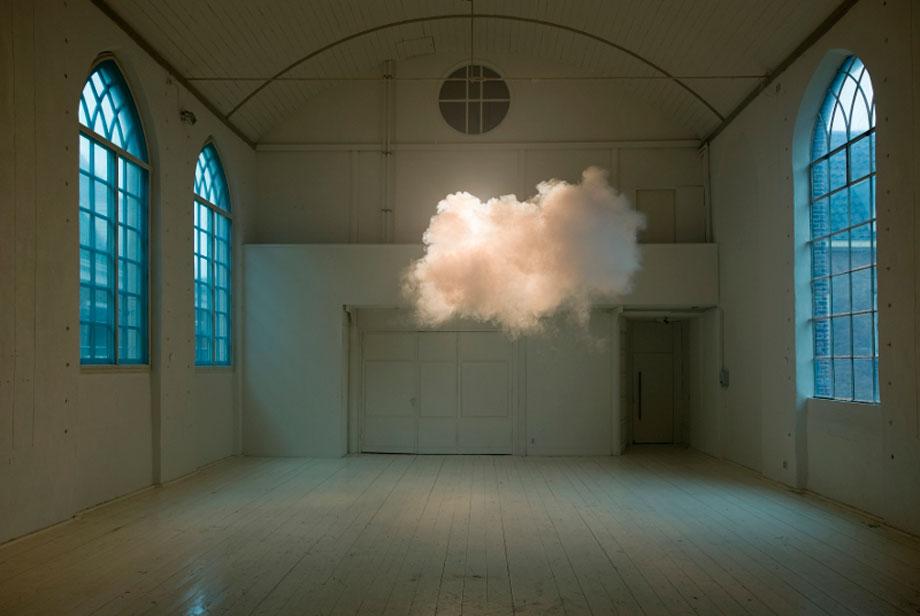 The clouds are a combination of aerogel and condensed water vapour, but I'm not sure exactly how they are made. The clouds typically only last long enough to get a couple of photos. I think the realism has a lot to do with the lighting.

Yes it is possible to build a structure similar to what you describe, and this is exactly what some researchers use to study cloud formation and the processes that operate within them. The other answers and comments have established that re-creating full-scale weather systems is probably out of the question, but meteorological cloud chambers exist for recreating certain weather phenomena. You ask about "preferably consumer grade" examples, but since all of these types of apparatus are effectively custom built to an extent, you could potentially create a "consumer-grade" version (just don't necessarily expect research grade data from your efforts!).

From a research point of view, they are used mainly for studying microphysical processes within clouds: condensation of ice nuclei, chemical interactions between molecules in clouds, snow formation, ice-crystal riming, thunderstorm electrification, and so on. As you point out in the question, the down-scaling issue means they aren't suited to reproducing large-scale weather features, although the limit is as big as you care to build it I suppose...

Here's a link to a research grade ice cloud chamber, used at the University of Manchester, UK. There are some excellent photos of how it is put together (unfortunately I don't have permission to put them here). Essentially it is a 10m tall steel chamber, which can be cooled down to about -55 centigrade. The pressure can be lowered to simulate conditions in the upper troposphere (about 50hPa). It has been used on occasion to reproduce the conditions in thunderstorm electrification.

Here's a video of a home-made cloud chamber in action (again, it is imitating small scale features and processes in clouds, not weather systems per se.), and a simple diagram of how it is set up: 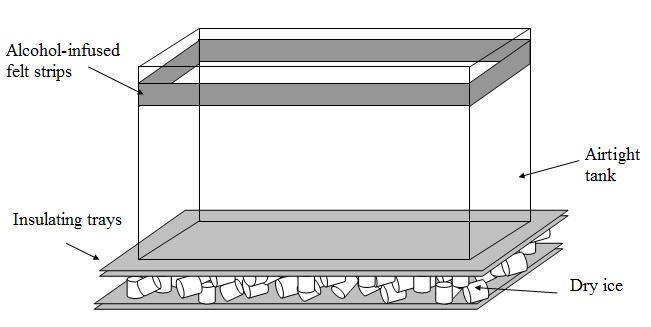 Alcohol is used here, since it evaporates and condenses much more readily than water. The dry ice at the base cools the lower section of the chamber, creating a temperature gradient within the chamber. The alcohol droplets will evaporate from the strips forming a fog (cloud) at the top, then condense as they hit the cool air, forming gentle rain droplets nearer the base. Here's a link to more detailed instructions.

Something in between these kind of set-ups is the closest you will come to re-creating 'real' clouds at home. They won't have the beauty of a towering cumulus over a mountain range (although some say there is beauty in cloud microphysical processes.)

Annecdote 1: At the EGU 2014 Annual Conference in Vienna, the organisers created a series of rooms that you could walk through and experience being inside a cloud.

Annecdote 2: Incidentally the first person to create a 'weather chamber' was CTR Wilson, trying to reproduce the cloud formations he had seen on Ben Nevis in the Scottish Highlands. His invention actually led to the discovery of ionizing radiation. http://www-outreach.phy.cam.ac.uk/camphy/cloudchamber/cloudchamber_index.htm

The Massachusetts Institute of Technology (MIT) offers a rotating tank setup. This so-called 'weather tank' enables a large set of experiments demonstrating a wide range of phenomena that occur in the atmosphere and ocean. Adding different food dyes into the rotating tank makes it possible to visualize the phenomena, sometimes producing beautifully looking cloud-like structures. I once had the opportunity to show a few experiments to kids, and their responses were overwhelmingly positive.

I think it would be have to be air tight I'm trying my own theory out but much smaller. I'm gonna try out how the flat earth idea is where there is water above. So basically the idea is I'm gonna put a plant in dirt alive an growing inside a glass sphere that's round along with the needed gases. And submerge it under water if nothing happens after so long I'll put bugs inside if nothing else happens then something bigger an so on n so forth.

You just need a big enough space,. and you need freezing cold air at the top of it, then warmer air at the bottom, and water vapour, that condenses. Then you might get rain, even snow forming depending on the temperatures. Is the conditions right you even get clouds. Now If you want to create a thunderstorm, you need air movement as well, upward ,downward, sideways and so on. And you defnitely need to produce hail and strong rain. In theory its probably possible, but its very very costly (you need a large scale building/hangar or dome, Nasa has one ;)) and very very expensive equipment to make it work, on the other hand once you have it, you have created something no one else has ever built) and you can control the weather in your closed environment.

Not the answer you're looking for? Browse other questions tagged meteorology laboratory or ask your own question.

10
How could humans alter storm intensity or direction other than cloud seeding?