Where does the symmetry of cloudy bands come from?

What is the origin of those symmetries? 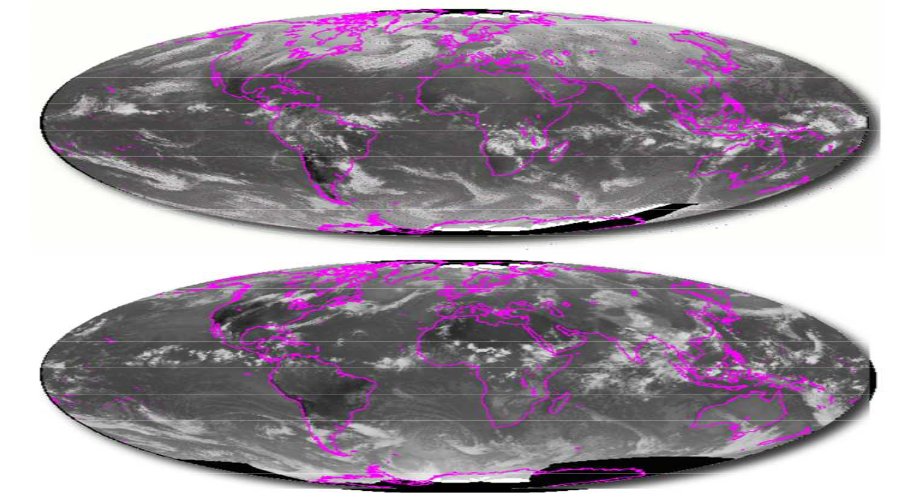 The symmetry is caused by the the spherical nature of the Earth, the typical weather features that form at certain latitudes, the formation of circulation cells at specific latitude zones, and the effect of the Coriolis force on the weather systems and cloud bands within them.

The latitude (and hence temperature from insolation) controls to a certain extent the broad scale atmospheric circulations. In the zone just North and South of the Equator, you find the trade winds converging towards the Equator from an easterly direction. Their direction is broadly determined by the Coriolis effect. (I think you can just make them out in the photo).

In the mid-latitudes (30-60 degrees) you frequently find extratropical cyclones in both hemispheres. Their formation is beyond the scope of this brief answer (see Cyclogenesis), but they are effectively a result of consistent suitable conditions to at those specific latitudes for cyclones to form. They are noticeable in the image as being quite spiral shaped.

The symmetry of cyclonic features is perhaps most enhanced by the Coriolis effect, caused by the rotation of the Earth deflecting moving objects (the weather systems including the clouds) in the atmosphere. This (in combination with the pressure gradient force) causes the spiral-shaped features at the mid-latitudes that you can see in the image. The effect works in opposite directions in respective hemispheres, so in the North, the cloudy bands appear to be turned anticlockwise, and in the South they appear clockwise, enhancing the overall symmetries present.

This is one of my favourite widgets for seeing this:

20
Where does wind come from?
8
Why does the Northern polar vortex usually have two centers?
8
How are 'Morning Glory' clouds maintained?
7
Are Southern Hemisphere 'Polar Blasts' caused by global warming?
9
Have there ever been simultaneous cyclones in the same ocean but different hemispheres?
6
Does the Coriolis Effect affect a wind from East to West?
3
How does the changing seasons affect the large scale easterly flow of the ITCZ?