Has an entire plate ever subducted?

We know that plates can subduct, causing one plate to be pushed into the core by another. As the plates move, the subduction continues, pushing one plate under the other.

If this process continues, logic says, the entire plate could be subducted under the other.

Has this ever happened? How would we know?

An illustration of the plate: 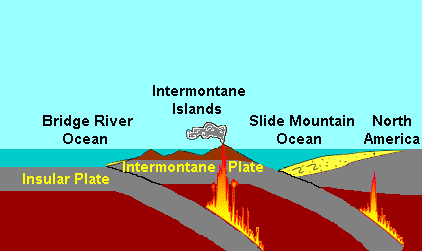 The entire Intermontane Plate was subducted under the North American plate. However, we are able to see the remnants of the plate in the volcanic islands it left behind.

Once this Intermontane Plate was subducted, the Insular Plate became the new subduction zone.

This entire process was actually repeated with the Insular Plate, subducting the entire plate, leaving behind yet another chain of volcanic islands that fused to the western coast of the North American Plate.

The Burke Museum has an excellent article that describes the subduction of both the Intermontane Plate and the Insular Plate. Well worth the read.

As a complement to the two other answers, the work of van de Meer et al., 2012 is worth mentioning. In this article, the authors tried to explore the Triassic-Jurassic plate tectonic evolution of the Panthalassa Ocean (currently all remaining oceanic crust in the Pacific Ocean is Cretaceous or younger).
They localized a serie of paleo-subduction zones (that they called Telkhinia) using paleo-volcanic arcs that are now accreted to the north American and east Asian continents. Additionally they used seismic-wave tomographic models of the mantle to identify the remnants of the subducted plate.
In their reconstruction the Panthalassa is thus divided in two oceanic plates, Pontus and Thalassa ocean, Pontus being the one that got completely subducted.

I'll add to Richard's contemporary answer and add that we have plenty of evidence for subducted plates in the geological past.

The evidence lies in the form of ophiolites. Ophiolites are fossil fragments of oceanic lithosphere, that for some reason (which I will not go over in detail here), survive subduction and become obducted (a fancy antonym for subduction) and emplaced on the surface. They are mineralogically and structurally distinct from anything that might find on "normal" continental crust. There are all kinds of ophiolites, and most importantly for our discussion are the SSZ (supra-subuction zone) ophiolites.

Let's look on the geographical distributions of ophiolites:

You can see that they are distributed all over the Earth. Some are obvious, such as the ones near New Zealand, because they occur on top of a convergent boundary (i.e. a subduction zone). Some are less obvious, for instance the ophiolites in Russia's Ural that sits in the middle of the continent. What this ophiolite represents is the past occurrence of oceanic crust between the west and east Eurasian continental plate, which amalgamated owing to the subduction of that (now long gone) oceanic lithosphere. Here's an example of how it happens: 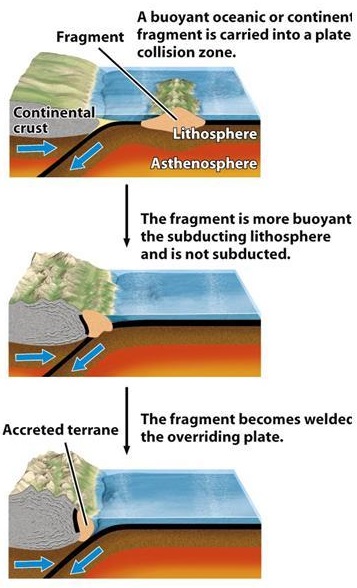 (sorry, no idea where this comes from)

So that piece of ocean between the continent and the continental fragment is subducted and lost forever, but you can see the remnant of it in the form of an ophiolite, represented by that sub-vertical thick black line.

Another example, closer to me, is the Arabian ophiolite. You can't see it in this scale but it's actually a series of ophiolites, so called "suture zones", where pieces of small continental crusts formed in an island arc settings get "glued" to the main continental crust.So on the one hand, you have the Alpine-Himalayan orogeny, closing the Tethys sea (of which the Mediterranean is a remnant), operating mostly in the Cenozoic (past ~65 million years), forming modern day ophiolites. On the other hand, not very far from there, you have remnants of past oceanic plates, embedded in the Proterozoic continental crust of the Arabian-Nubian shield (more than 600 million years ago). To complicate it even more, it is now being rifted, evident by the formation of the Red Sea. Geology is fun!

Not the answer you're looking for? Browse other questions tagged geophysics plate-tectonics subduction or ask your own question.

1
Speed of tectonic plate movement
2
Is plate tectonics a hoax theory? How can tightly packed plates move?
4
Why doesn't subducted earth crust melt?
9
Is it ever possible for an continental plate to subduct under an oceanic plate?
6
How can linear oceanic ridges (like the East Pacific Rise) be explained by single point mantle plumes?
6
Does subduction of continental crust happen at continental-continental convergent boundaries?
3
Do tectonic plates "float" over the mantle and "collide" like icebergs?
0
How Can Adjacent Parts of an Oceanic Plate be Subducted in Different Directions?
3
Slab-breakoff - always connected to continent/continent collision?