While reading the Wikipedia article on pyroclastic flows, I noticed that there's a section called 'Interaction with water'. This piqued my interest, as I was under the impression that lava generally doesn't interact much with water other than cooling down.

To my surprise, this claim is made in the article:

Testimonial evidence from the 1883 eruption of Krakatoa, supported by experimental evidence, shows that pyroclastic flows can cross significant bodies of water. One flow reached the Sumatran coast as much as 48 km (30 mi) away.

I tried to look up the citations, but they're both in books that I don't have access to at the moment. Can these flows cross water, and how?

In answer to the title question, "yes"! Here are some videos from Montserrat Soufriere Hills where the phenomenon has been extensively studied (probably more than anywhere else):

As well as Krakatoa, Mt Pelee's (Martinique) 1902 eruption managed to ignite ships in the harbour when the main town was destroyed - which suggests the pyroclastic flows crossed the harbour.

Also my u/g mapping area in North Wales included the Snowdon Volcanic Group. It and related tuffs appear to have been erupted over water and/or wet estuary type environments (there is open to debate).

Can't help with the details, but think about it like this. It is a density current (denser than air, that's why it flows downhill), but the density is less than that of water, so it will flow across it.

Compare this to turbidity flows (also density currents), which are denser than water and will therefore flow downhill in the ocean. 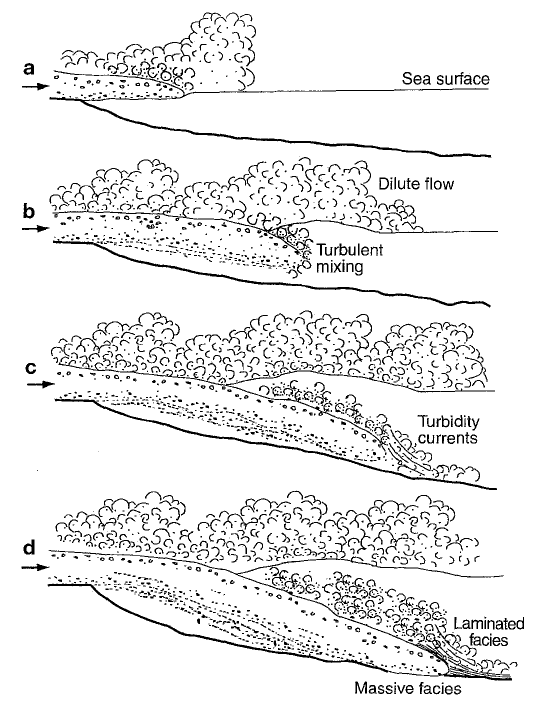 . Crossing water also doesn't suggests every material in a single flow pass over the water. Gradually the flowing material amount decreases. The distal deposits are silt to sand sized pumicious grains. Note that pumice can flow over water because of its high porous structure.

Here are the notes from the paper* titled Pyroclastic flows and surges over water:an example from the 1883 Krakatau eruption

.... Pyroclastic flows and surges that traveled over the sea for distances up to 80 km.......Energetic flows spread out away from the volcano at speeds in excess of 100 km/h and traveled up to 80 km from source. The flows retained temperatures high enough to burn victims on the SW coast of Sumatra.....

15 km from the source flow deposited 1-2 m pyroclastics on Sebesi island.flows were moving with sufficient energy to pass over the 832-m peak of Sebesi island, inferring a maximum velocity of 320 km/h.

20 km from the source massive and poorly sorted features of the deposits indicate suspension sedimentation from the basal part of a high-particle-concentration flow. Density assumed < 1000 kg/m 3, the maximum particle concentration would be 45%. Temperature 500 C

40 km from the source temperature fall to 100-200 C. At this distance from Krakatau the deposition of tephra was not significant (several centimeters) implying that the particle concentration had been significantly reduced to perhaps only a few percent.

The distal deposits exhibit a decrease in sorting coefficient, median grain size, and thickness with increasing distance from Krakatau

Some notes on mechanism from the same paper

If the flow is at high temperature it will vaporize the underlying water and result in (a) expansion of the gas/particle mixture, (b)an increase in the turbulence, and (c) a decrease in friction. All of these effects will enhance the support of particles and thus reduce the amount of deposition.

Druitt and Sparks(1984)have proposed that peak magma discharge occurs at the time of caldera formation, as the subsiding volcanic edifice exerts a dynamic pressure on the underlying magma chamber. The increase in magma discharge at Krakatau led to a high flux of pyroclastic flows into and over the sea.

Widespread reports of mud rain closely associated with the 10 a.m. flow is attributed to the formation of a large co-ignimbrite plume laden with moisture from pyroclastic flows and surges which traveled over the sea. The transfer of heat from the flows to the sea surface led to the production of steam. As sedimentation reduced the flow's density, a moisture-rich buoyant plume lifted off, carrying fine-grained tephra and steam. Secondary phreatic explosions from shallow and proximal submarine pyroclastic flows may also have contributed tephra and steam to the plume,

Edit: What had happened to the part of the pyroclastics which had entered water?

The submarine facies; The most common submarine facies properties: it is a massive, poorly sorted mix- ture of pumice and lithic lapilli-to-blocks set in a fine silty to sandy ash matrix. Which is the same facies with the subaerial deposits which lies on the remnant cliffs of the Krakatau island.

The submarine deposition related events: deposition of the submarine massive facies resulted from sinking of a high concentration, deflated basal component of subaerial pyroclastic flows which entered the sea either directly at the shoreline (e.g., west coast of Sertung), or several kilometers from source. Evidence which suggests minimal pyroclastic flow/seawater interaction is the lack of tractional sedimentary structures, retention of the fine ash fraction, and lack of hydraulic fractionation of components. Evidence for high tempera- ture emplacement (475-550 C of the massive facies consists of well-grouped thermoremanent magnetizations of both lithic and juvenile components as small as 0.5 cm in maximum diameter. The deposits are therefore interpreted as true suba- queous pyroclastic flow deposits. A less common, distinctly laminated syneruptive facies is well sorted, fine grained, and vitric enriched. In contrast to the massive facies, the laminated facies exhibits small-scale tractional sedimentary structures such as 1-mm-thick planar laminae and 1-cm-scale low-angle cross-stratification. Deposition of the laminated facies was most likely from low-concentration turbulent flows shed from the boundary layer between sinking high concentration pyroclastic flows and seawater, or a steam-rich fluid phase. In this case turbulent mixing produced low-con- centration flows in which components were fraction- ated according to their settling velocities. The facies association observed in the syneruptive subaqueous pyroclastic deposits is similar to that re- ported from an ancient sequence within the lower Mio- cene Tecuya formation (Cole and DeCelles 1991) where flow integrity appears to have been maintained in the transition from subaerial to submarine environ- ment. This association of laminated and massive depos- its can be expected where high concentration flows are discharged into water.

Edit: In a research* it is suggested that a turbidite current can flow over barriers, if the thickness of the flow exceeds %65 of the barrier. One may interpret this that, after a pyroclastic current dives to shallow water it may come back to the surface again. 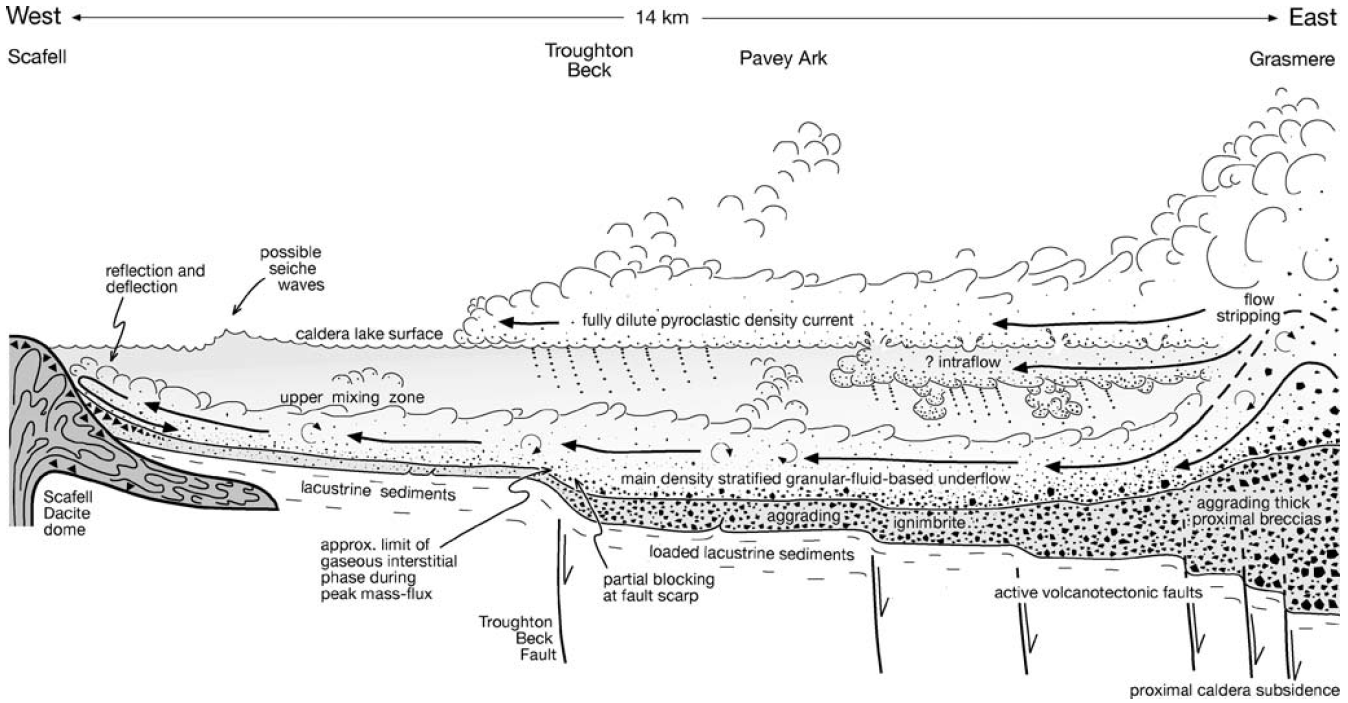 One more edit: There is a downloadable paper which based on laboratory experiments. It explains the mechanism of how a pyroclastic flow can cross water. After looking this paper one may see that the results of the experiments are concordant with the real world incidents such as Krakatoan flow which i have tried to explain. Here is link of the paper. https://www.researchgate.net/publication/225813471_Entrance_of_hot_pyroclastic_flows_into_the_sea_Experimental_observations

I think I recall that being superheated, the pyroclastic flow can cross water as it can ride over a layer of steam generated from the water surface, sort of like a hovercraft, but riding on steam rather than blown air.

Also Lava/volcanoes do interact with water, aside from the relatively benign interaction with basaltic pillow lavas (which I assume is the cooling you speak of) there are https://en.wikipedia.org/wiki/Phreatic_eruption

Not the answer you're looking for? Browse other questions tagged volcanoes pyroclastic-flows or ask your own question.