What visual wave behaviour help to tell if a tide is going in or out?

I have always wondered how someone could tell, by a brief observation (a few minutes at most), whether a tide is receding or advancing on a rainy day. Assuming there is no access to tide times and the ground is completely wet due to the weather.

The reason why I am emphasising a rainy day, is due to the wet sand on the ground, on a dry day, wet sand would indicate whether the tide is going in or out. On a rainy day, everything is wet, no way of telling.

Are there immediate waveforms or wave behaviour that could determine the direction of the tide?

As SimonW points out strong tidal currents will modify the wave shape and significant height. The Wolf & Prandle (1999) study provides a neat summary description of the effects of currents (of any kind) on waves:

(i) Wave generation by wind—the effective wind is that relative to the surface current, and the wave age (cp/U*) and effective surface roughness may be important, e.g., Janssen (1989). Here cp is the wave phase speed and U* is the friction velocity of the wind. The effective fetch also changes in the presence of a current.

(ii) Wave propagation—the effects of depth refraction are easy to spot, turning the mean wave direction towards shore-normal. Current refraction has a more subtle effect, dependent on the spatial variation of currents, whether decreasing or increasing towards the coast. Generally shoaling depths will increase the tidal amplitude towards the coast until friction reverses this trend. The waves will tend to turn towards the direction of the current axis.

(iv) Steepening of waves on an opposing current (related to (iii)), due to shorter wavelength and increased wave height from wave action conservation.

(vi) Wave–current bottom stress. Various empirical theories for wave–current interaction in the bottom boundary layer suggest that the friction coefficient experienced by waves in a current regime will be larger than in no current. This also applies to the effective current friction factor in the presence of waves.

(vii) Effect of vertical current shear on wave breaking. Wind-driven surge currents would be relevant to this, the tidal currents have no surface shear.

I think the most "observable" of this effects from a "brief rainy day observation" will be their #4 effect. The steepening of waves as they oppose the current can be observed relatively easily. Care must be taken though when interpreting item #4: In steady (constant in time) and homogeneous (constant in space) current, the wavenumber remains unchanged, only the apparent (absolute) frequency and phase speed change:

wavenumber, and thus the steepness of the wave can change only in unsteady or non-homogeneous current field, in absence of other effects.

However, visually, steepness is not the only property of the waves that can reveal strong underlying current. For example, in absence of swell and in presence of strong Eulerian currents and light intermittent wind, small wind-generated ripples can be observed to form on the surface. These waves are almost capillary, very short and low, and propagating slowly. The direction of their propagation can be identified visually because the front face of the wave is steeper than the rear. In presence of strong Eulerian flow against the direction of wind, the whole patch of these short waves can be observed to move backward, rather than forward, thus revealing the direction of the underlying current.

In a similar but different effect, underlying Eulerian flow can be identified in a situation where the current increases to the point where it equals the opposing group velocity of the waves. Since the wave energy is advected with group velocity, they cannot propagate beyond this point, and usually a line the divides the two regimes can be seen: one side with smooth surface without waves, and the other where waves are present, propagating toward the line but steepening and whitecapping when reaching the line. This physical process is known as wave blocking.

Another classic example is the mouth of the Columbia River, where the waves during ebb tide become so steep they often break along the Columbia River Bar. During strong ebb tides, large ocean waves, especially swells, become larger, steeper, and also they come closer together. The resulting dangerous conditions change rapidly as the tide turns to flood with waves being smaller and less steep. 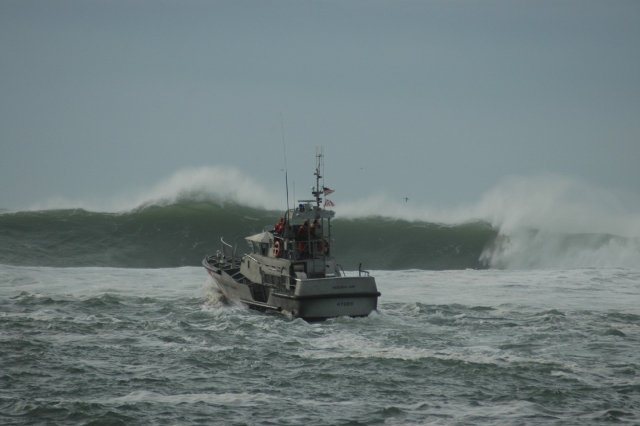 One study that looked at the effect on wave height is Gemmrich & Garrett (2012). The attached figure from their paper 2 shows how the significant wave height is affected (modulated) by the normalized tidal speed. Larger waves occur during times of larger tidal currents. 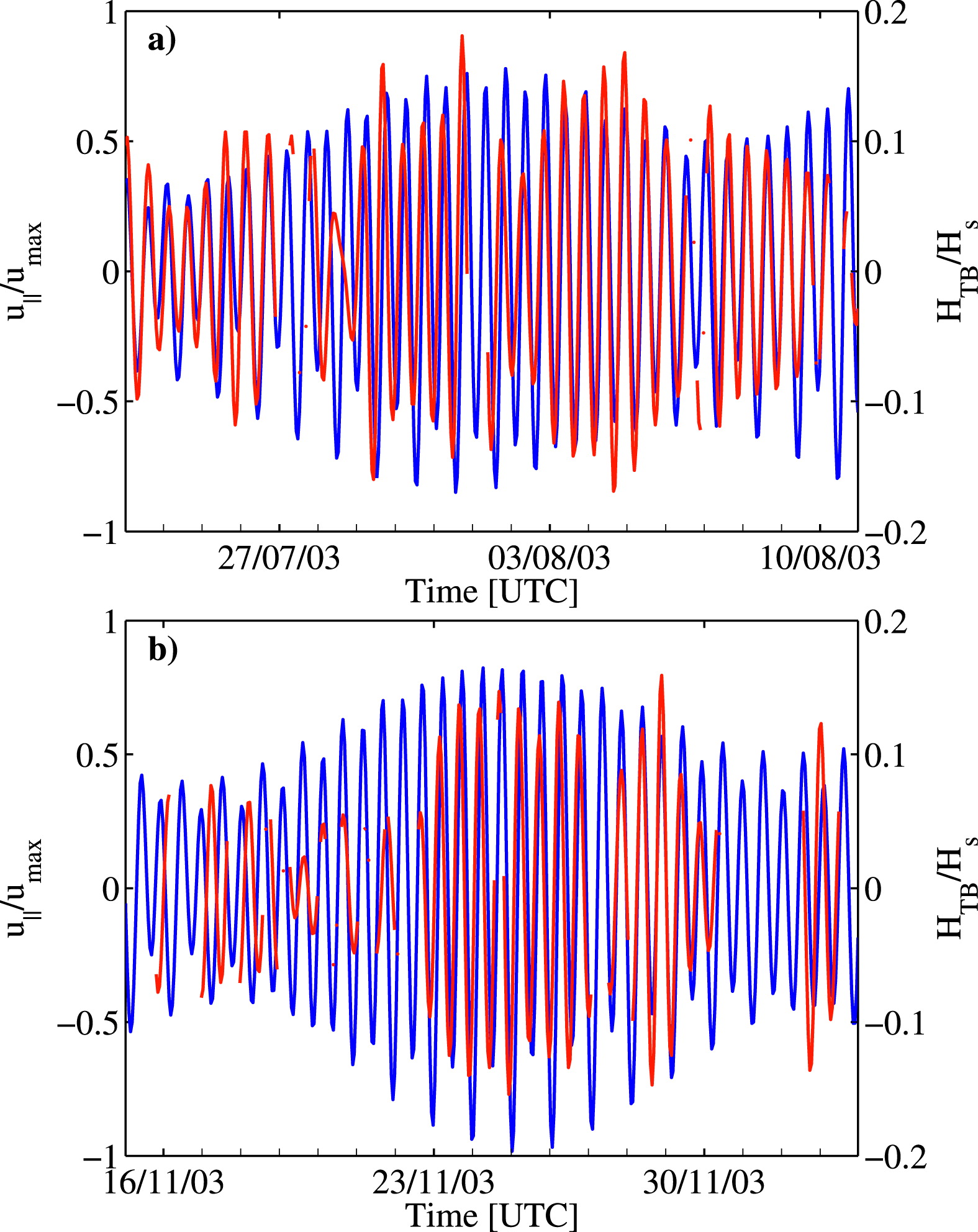 . The theoretical considerations can be found in Tolman (1990) where a thorough explanation of the changes in surface wave amplitude, direction, and frequency caused by currents. Other studies looking at wave height modulation include Thornton & Kim (2012) and Wolf & Prandle (1999).

5
Why does wind blowing against a strong current create way bigger waves?

17
What influences tide-height the most? Can I guess the height by looking on a globe?
4
What is the amplitude of the largest internal wave ever observed?
6
What factors bring sand into or out of the beach?
5
What might cause these “wave clouds” near the horizon? Could it be gravity waves?
5
What proportion of the energy input to the ocean tide system comes from the sun?
8
What goes into a tide power prediction for every fifteen minutes over the next twenty five years?
1
What would be the phase shift and polarity of a seismic wave upon reflection