Release mechanism for methane clathrate at the PETM

The Paleocene-Eocene Thermal Maximum (PETM) is a well-studied warming event near the Paleocene-Eocene boundary.
It is characterized by its extreme warming rate: from onset to recovery the event lasted ca. 100 kyrs, and the global temperature is thought to have increased by ~6 °C in barely 20 kyrs.
This event is of particular interest not only for its $\delta^{18}\rm O$ but also a sharp negative excursion in the $\delta^{13}\rm C$, implying a strong input of $^{13}\rm C$-depleted carbon into the system. 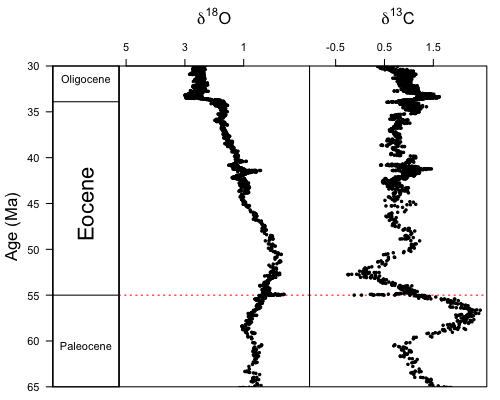 One frequently invoked hypothesis to explain this input is the leakage of methane from clathrates trapped in seafloor sediments.
Being a paleontologist and not a geochemist, I struggle to understand the actual chemical mechanism involved. I was thus wondering if someone could explain the mechanisms allowing the destabilization of methane clathrates at the same time on a global scale.
If it's just linked to a temperature threshold, how come it wasn't reach prior to that (warmer temperature were reached during the Cretaceous)?

geochemistry paleoclimatology clathrates
share | improve this question | |
edited May 6 at 8:27

There seems to be some uncertainty as to the cause and mechanism for the PETM. In the Science Daily article Methane may be answer to 56-million-year question: Ocean could have contained enough methane to cause drastic climate change (2011) reporting research from Rice University, they claim that the seafloor was already warmer, thus according to their models:

if the oceans were warmer, they would contain less dissolved oxygen and the kinetics for methane formation would have been faster. With less oxygen to consume organic matter on the way down, more sank to the ocean floor, Gu said, and there, with seafloor temperatures higher than they are today, microbes that turn organic matter into methane work faster.

Thus, they claim, the amount methane in the form of clathrates would have been approximately the same amount as today, but in a thinner stability zone. They are not clear about what caused the destabilisation, but made the analogy of a charging-discharging capacitor (shown below, from the same source): 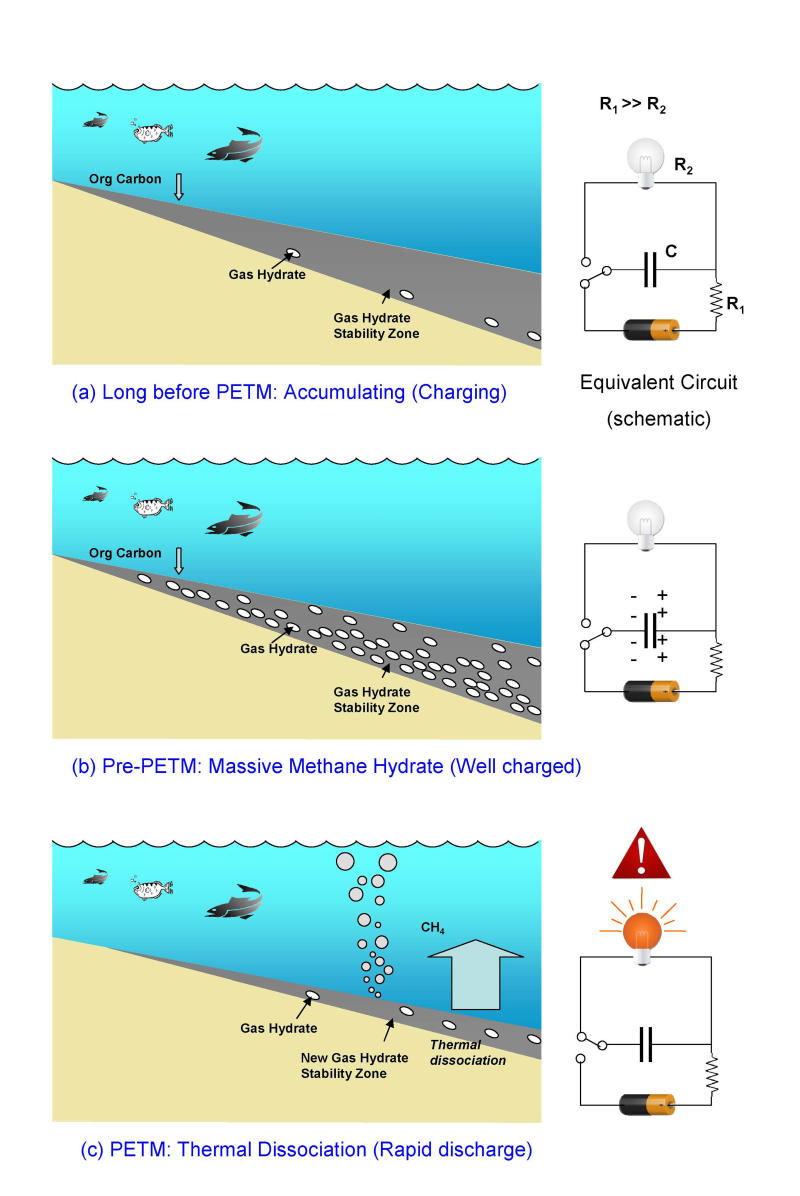 A recent article A seasonality trigger for carbon injection at the Paleocene–Eocene Thermal Maximum (Eldrett et al. 2014) details of research into what vegetation eisted at the time to determine the species that were present in the time leading up to the PETM (or CIE = Carbon Isotope Excursion), they found that the seasons were already becoming warmer prior to the CIE (which led to the PETM). The reason for the seasonal warming trend is modelled by the authors as being due to

Implying that orbital influences may have had a role in causing the increased seasonal warming leading up to the CIE.

represent the smoking gun of a climatologically forced threshold in the carbon cycle that caused the PETM.

Essentially by destabilising and altering the stability zone (as shown in the diagram above).

Your question about the Cretaceous raises an important point presented in the earlier article Beyond methane: Towards a theory for the Paleocene–Eocene Thermal Maximum (Higgins and Schrag, 2006), who suggested that the carbon released from methane clathrates would not have been sufficient for the warming experienced during the PETM.

suggesting that there was not enough methane clathrate, that it was 'building up' during the Cretaceous and early Palaeogene.

Not the answer you're looking for? Browse other questions tagged geochemistry paleoclimatology clathrates or ask your own question.