Is the Principle of Fossil Succession accurate?

This principle states that :

Fossils of species that did not coexist in the same geological period were found to be in different strata. The principle provided a way for geologists to determine the age of a particular rock layer based on the fossils embedded in it.

This principle seems illogical to me. Let's say that in South America, fossils of a certain species are found, and dated to be from Jurassic. Now, same fossils are found in Europe, and therefore we should conclude that stratum are from Jurassic too.

As we know that Earth is all the time disrupts by inner motions of its cores, what if those motions implied a fossil to move over stratum? It would imply a miscalculation here. How can I prove that this principle is safe?

(For better understanding, imagine that I bury a box at a certain place. If you come 2 years later, nothing proves that you'll be able to find it again, because 'things move in the inside')

Your analogy with burying a box is not as accurate as you think. It needs specific sedimentary conditions for the remains of an organism to fossilize: being buried in soil is far from enough.

However you are right to question the principle of succession in the sense that, things can happen before the fossil is embedded in its stratum. Namely you have three common phenomena: reworking, downworking, and time averaging.

Reworking, the more common phenomenon. It can occur when the sediment that originally contain the fossil is being eroded. What the sediment contained is therefore once again put in the system and need to be either dissolved or re-sedimented in a new stratum.

Downworking is (I think) more frequent in marine settings: before the sediment is consolidated, the fossil sinks into it, into an as-well unconsolidated but older sediment.

Of the three phenomena, only reworking is really problematic (the two other being only moderate time displacement, rarely more than a couple of $10^5$ years). However it is usually manageable to recognize the fact that a fossil was reworked (different alteration compared to other fossils in the same stratum for instance, and if the sediment was already consolidated when the fossil was displaced you will find bits of the old sediment still attached to it).

There is also another problem (regarding your example of a Jurassic species deposited in South America and the same species deposited in Europe), which is biogeography: a species does not appear and disappear at the same time everywhere on Earth (see illustration below). In most cases the time discrepancy is small but in some case it isn't: this is what we call, in biostratigraphy, diachronism. 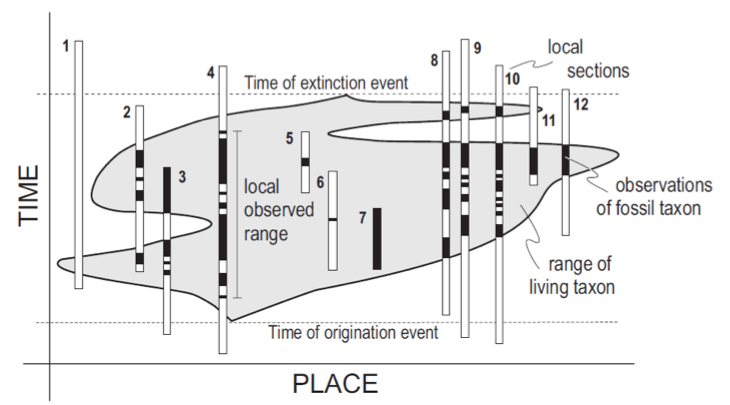 Taken from Peter Sadler's short course on biochronology. The grey area represent the taxon extent in time and space.

7
Is the Principle of Original Horizontality a good indicator?
0
Are there any geological periods found on top of each other that have dinosaurs of that period with in them?

11
What periods of the fossil record are most lacking in specimens?
7
Is the Principle of Original Horizontality a good indicator?
0
Are there any geological periods found on top of each other that have dinosaurs of that period with in them?
4
Aligator or Dinosaur Fossil skin type rock
5
ID on a potential flint fossil
2
What is this strange fossil I found?
3
Fossil from North Norfolk coast, UK
3
Donation Options for Fossil and Mineral Collection
1
Will the fossil record ever be complete enough to see inside punctuated equilibria?