Is the Cameroon Line still an active rift zone?

The Cameroon Line is described by the Oregon State University's Volcano World webpage What is known about the volcanoes of Cameroon? as a

a chain of volcanoes extending from Annobon Island in the Atlantic Ocean northeastward through Cameroon. The oldest rocks have been dated at 70 million years old.

As in this map from the Global Volcanism Program's Oku Volcanic Field webpage: 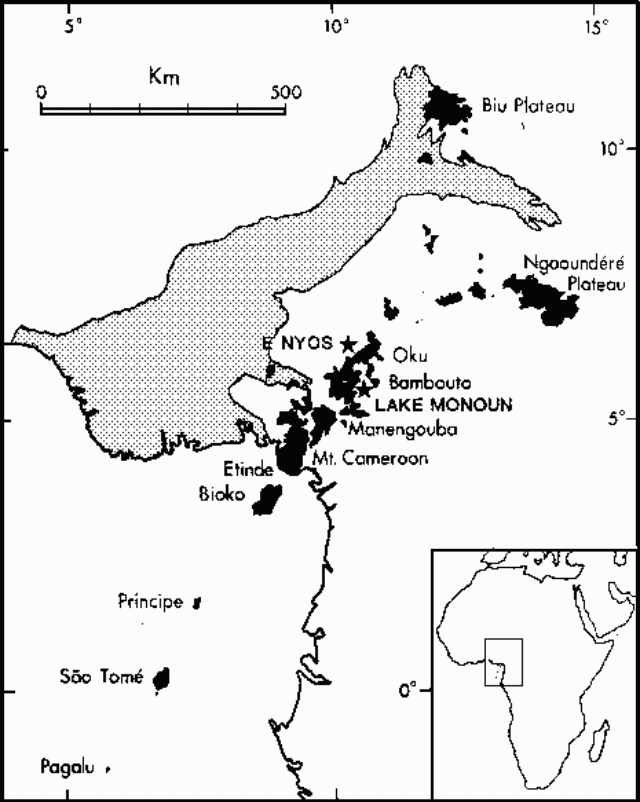 A notable active volcano in the area is Lake Nyos which killed 1700 people in an eruption that spewed noxious gases (mainly $\ce{CO2}$) in 1986.

About 80 million years ago, during a reorganization of plate boundaries, the African plate rotated counter-clockwise. Then a new rift formed that failed to split Africa but apparently did form conduits that allowed magma to ultimately reach the surface and form the volcanoes of the Cameroon line.

Is there any evidence to suggest that the Cameroon Line is still a tectonically active rift system?

an enigmatic structure that defies common dynamic models of melt generation and volcanic activity on Earth.

The enigma is due to the CVL having no spatial age progression in the rift system, despite having continual magma intrusion over 70 million years along the 1600 onshore-offshore line.

The authors also suggest that

The chain is nearly perpendicular to the coastline and terminates in a Y-shaped structure that has not been affected by absolute plate motions, implying that the mantle upwelling that feeds magmatic activity is attached to the continent.

The authors model that rather than a developing rift system, the CVL is likely to be an example of where the lithosphere becomes unstable due to cooling from the crust above.

It should be noted that the CVL lies in between 2 cratons, shown as white in the seismic tomography image below from Macquarie Universty - what also should be noted, is the colour of the active East African Rift. 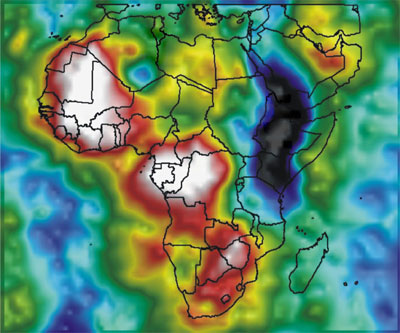 Further, according to the article Formation of the Cameroon Volcanic Line by lithospheric basal erosion: Insight from mantle seismic anisotropy (Elsheikh et al. 2014), modelled the sub-crust dynamics that

involves a channel flow at the bottom of the lithosphere originated from the NE-ward movement of the asthenosphere relative to the African plate.

from this, the authors hypothesise that

progressive thinning of the lithosphere through basal erosion by the flow leads to decompression melting and is responsible for the formation of the CVL. The model is consistent with the lack of age progression of the volcanoes in the CVL, can explain the formation of both the continental and oceanic sections of the CVL, and is supported by previous geophysical observations and geodynamic modeling results.

A key conclusion the authors made regarding the flood basalts and volcanism in the CVL is that observations do not support mantle convection or mantle plume causes, rather, they assert that basal lithospheric erosion due to

concentration of mantle flow associated with the sharp change in the orientation of the continental margin of western Africa.

14
Why is there a line of volcanoes along the northwest coast of North America?
19
Can Venus be considered to be tectonically active?
5
Is there evidence to delineate where a southern extension of the East African Rift 'plate boundary' is developing?
11
Active rifting in Antarctica?
5
Cause of Wallace line
7
Has our understanding of the East African Rift significantly changed recently?
8
How does a subduction zone form mountains?
2
Will California become a subduction zone in the distant future
1
Is it possible for an active volcano to become less violent over time?