The Silurian Period is now known to have undergone several significant positive $\delta^{13}C_{carb}$ excursions, namely the early Aeronian, Late Aeronian, Valgu, Ireviken, Mulde, Lau & Klonk events (see e. g. Cramer et al. 2011; Gradstein et al. 2012). It seems to me that those excursions where mainly studied in the context of chemostratigraphy and not paleoclimatology, though.

Is there any hypotheses on what could have triggered these excursions?
How come the short (ca. 24 Myr) Silurian be so unstable has to have so many significant excursions?

Even though many researchers now recognise that the Silurian palaeoclimate show signs of large fluctuations - resulting in the carbon excursions, the mechanism behind the climatic shifts is not well understood.

Recent research from Munnecke et al. 2014 (1) suggest that the carbon (and oxygen) isotope excursions that mainly affected low latitude palaeoenvironments, were probably due to climatic shifts between humid (low C) and arid (high C) climatic conditions. The possible consequences of these two climate regimes is shown below: 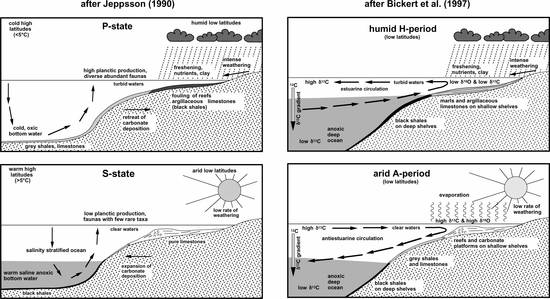 One of the only certain climatic regimes that occurred was in the early Silurian, where 3 of the 7 'Early Palaeozoic Icehouse' (EPI) events occurred (2). Munnecke et al. 2010 (3) note that much of the Silurian is 'sandwiched' between the EPI and the greenhouse of the Devonian, possibly suggesting a prolonged transitional period between the 2 climatic regimes.

Some observations suggest that sea levels fluctuated very wildly, Munnecke et al. 2010 (3) states they were up to the order of 140 m. This is partly related to recent oceanic circulation modelling performed by Servais et al. (4) who state that the palaeogeography of the time (large northern ocean and the Gondwanan land mass at the south pole - see below) would have possible resulted in a halothermal circulation, rather than the modern day thermohaline circulation, essentially due to the restrictions a possible Mediterranean-like production of denser water at the lower latitudes (as indicated in the diagram above). 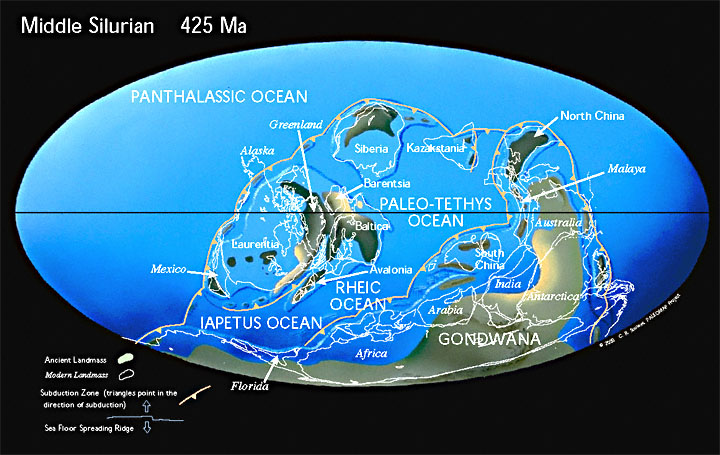 So, in summary, the oceanic-atmospheric interaction of the Silurian is considered to be unstable (1)(3), with oxic and anoxic regions uncertain (4), but the effects were clearly seen with variations in the climate from humid to arid and large fluctuations in sea levels.

12
How were we able to measure carbon dioxide levels in earlier climates?
5
Do river fluxes help contribute to long-term carbon sequestration?
4
What caused the Carbon Dioxide Variations observed in the 800,000-year polar ice record?
4
Is "Carbon Neutral" (roughly) 5 Gt CO₂ equivalent?
3
How do the slow and fast carbon cycles influence climate change?
7
How much carbon dioxide does war release?