Why is there so much oil in Saudi Arabia, Venezuela and Canada, but almost none in Europe?

Why do some countries have a lot of oil reserves, while some others don't?

I wouldn't say there's 'almost none' in Europe, but the global distribution of petroleum is uneven. The reason is that petroleum systems need a convergence of conditions that is relatively rare.

For a start, the comment about the inappropriateness of a political map for this purpose is spot on. This USGS map of global petroleum systems, and non-petroleum-rich basins, is much better — apart from the fact that it perversely omits the USA's substantial endowment: 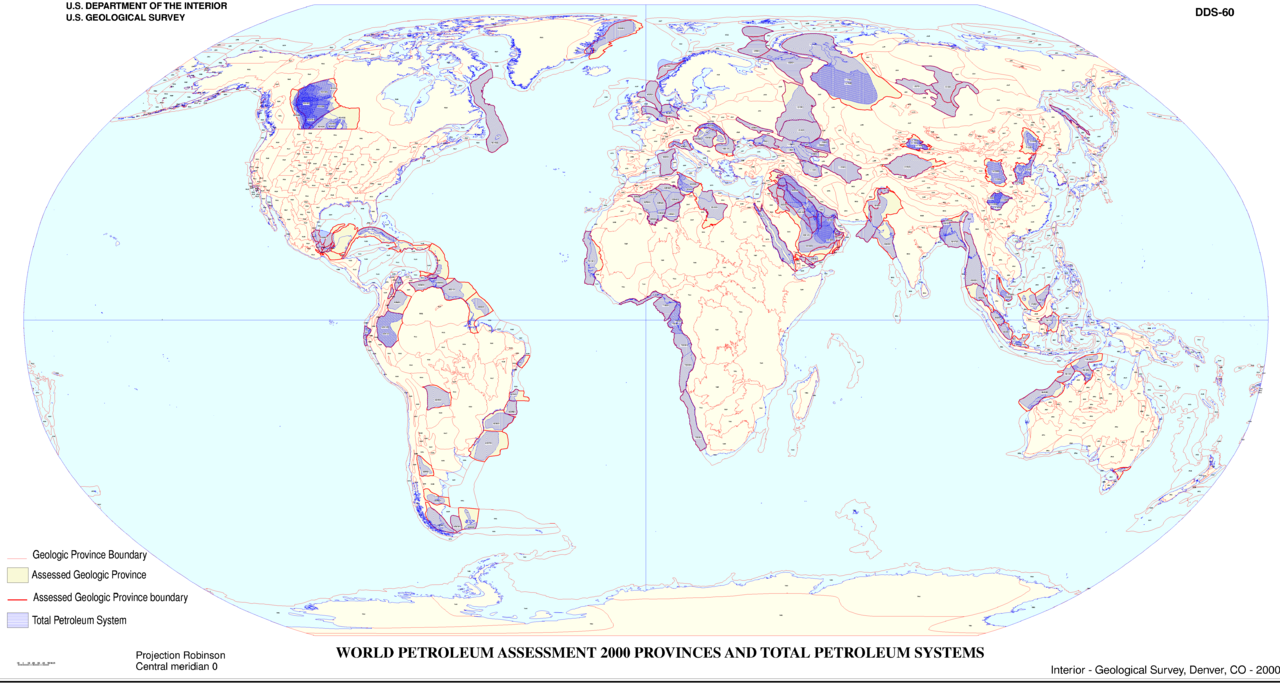 These 'petroleum systems' are essentially modern or ancient sedimentary basins with a particular combination of features. I'll refer to a previous answer about a specific region: Why would there be no hydrocarbons in the Sveconorwegian belt? Paraphrasing, and self-plagiarizing, here's what you need for a hydrocarbon (oil or gas) accumulation:

Only 'conventional' hydrocarbon deposits, such as you might find in the North Sea, Saudi Arabia, or the Gulf of Mexico, need all these conditions. 'Shale gas' is basically just a mature source rock — we can extract hydrocarbons from it by fracking, for example.

So the map of global petroleum resources is a map of places where these criteria converge. Certain deltas are prolific (Mississippi, Niger), because you have rapid burial of sand and organic material. In other places, one or more of the conditions has not been met. Much of Canada, for example, is exposed basement granite: none of the components are there.

The unevenness is exacerbated by the Pareto distribution of system productivity — as with most natural things, we have a few giants, and a long tail. So the WCSB and Saudi stick out as anomalous, making the distribution even more 'lumpy'.

The map shown in the question is of proven oil reserves that can be extracted under current conditions. However, it is really showing you the distribution of oil reserves in a political sense, which is not fundamental to the source of petroleum reserves. Instead, you should look at the geology that is responsible for oil reserves. I like the description here: http://large.stanford.edu/courses/2013/ph240/malyshev2/

Regions where the ancient precambrian igneous rocks are exposed at the surface of the Earth are called shields. The world oil reserves are not found in the shields but in orogens which are regions between tectonic plates that experience deformation forces due to the motion of the plates. These forces create basins: areas of deep sedimentary rocks which are necessary to produce the oil. The forces also deform the sedimentary rocks which leads to creation of traps necessary for oil and gas accumulation. The basins and orogens coincide with many oil reach regions: east and west costs of America, around the Persian gulf, along the Ural mountains, across the Caspian sea, in Siberia, in the north of Africa.

More information on the origin of petroleum reserves is also found here http://en.wikipedia.org/wiki/Petroleum#Formation

Petroleum is a fossil fuel derived from ancient fossilized organic materials, such as zooplankton and algae. Vast quantities of these remains settled to sea or lake bottoms, mixing with sediments and being buried under anoxic conditions. As further layers settled to the sea or lake bed, intense heat and pressure build up in the lower regions. This process caused the organic matter to change, first into a waxy material known as kerogen, which is found in various oil shales around the world, and then with more heat into liquid and gaseous hydrocarbons via a process known as catagenesis. Formation of petroleum occurs from hydrocarbon pyrolysis in a variety of mainly endothermic reactions at high temperature and/or pressure. There were certain warm nutrient-rich environments such as the Gulf of Mexico and the ancient Tethys Sea where the large amounts of organic material falling to the ocean floor exceeded the rate at which it could decompose. This resulted in large masses of organic material being buried under subsequent deposits such as shale formed from mud. This massive organic deposit later became heated and transformed under pressure into oil.

Three conditions must be present for oil reservoirs to form: a source rock rich in hydrocarbon material buried deep enough for subterranean heat to cook it into oil, a porous and permeable reservoir rock for it to accumulate in, and a cap rock (seal) or other mechanism that prevents it from escaping to the surface. Within these reservoirs, fluids will typically organize themselves like a three-layer cake with a layer of water below the oil layer and a layer of gas above it, although the different layers vary in size between reservoirs. Because most hydrocarbons are less dense than rock or water, they often migrate upward through adjacent rock layers until either reaching the surface or becoming trapped within porous rocks (known as reservoirs) by impermeable rocks above. However, the process is influenced by underground water flows, causing oil to migrate hundreds of kilometres horizontally or even short distances downward before becoming trapped in a reservoir. When hydrocarbons are concentrated in a trap, an oil field forms, from which the liquid can be extracted by drilling and pumping.

The amount of oil in the ground is an indicator of how much life used to be there. So, we can conclude that those areas that have a large amount of oil were those that had more vegetation millions of years ago.

Not the answer you're looking for? Browse other questions tagged economic-geology petroleum or ask your own question.

11
Why would there be no hydrocarbons in the Sveconorwegian belt?

13
How can the 'abiogenic oil' hypothesis be disproven?
11
When did/will peak conventional oil happen?
6
Hydrocarbon potential in Ganges Brahmaputra delta
3
How should I start studying about 'successful transitions in post-drought economies'?
0
Can garbage be sent into the (near-)center of the world?
16
Geothermal instead of fossil and nuclear?
3
Is or was there oil on Sakhalin?