In 1973, Hsü et al. explained the findings of a large evaporite deposit during the Messinian (Latest Miocene stage, ca. 6Ma) in the Mediterranean by a basin-wide desiccation event. It has been speculated later that it was due to the closing of the Gibraltar strait.
Much research has been done on the subject since then, generating controversies on whether the entire basin became totally or partly desiccated, on the actual cause of the event, on whether the Strait closed because of tectonic activity or because of sea level drop, etc.
Hence my question: What is the current consensus on the extent of that event and its causes?

The present consensus is that the Messinian salinity crisis (MSC) took place in 5 stages:

0) Mediterranean restriction from the ocean; 1) Primary gypsum precipitation (starting 5.97 million years ago) at the margins of the Mediterranean, still fed by Atlantic water; 2) Halite precipitation (more than 1 km thick, mostly in the abyssal areas); 3) Possibly a partial desiccation during a full disconnection from the ocean; 4) Geologically-rapid restoration of normal marine conditions, 5.33 million years ago.

*Whether 2 and 3 are in that order or the inverse. And their duration, ranging from a few tens of thousands to a few hundred of thousand years.

*Whether 3 involves a km-scale sea-level drawdown or only a few tens or a hundred meters.

*Whether 4 took place in a single catastrophic event or in a few tens of thousand years[4][5].

As for the causes, there is a widespread agreement that these events were the result of a relative dry climate (evaporation exceeding precipitation in the Mediterranean) in combination with the tectonic vertical motions of the Gibraltar Arc (Betics and Rif) and the global sea-level changes, but disagreement remains as to what mechanism is more relevant. I can add here the role of climatically-controlled erosion along the connecting corridor: for example: during Stage 1, the tectonic uplift of the seaways should have competed with the erosion produced by the inflowing water from the Atlantic.

Of course, none of the above is accepted by all researchers, but a good reference (though quite technical) for this consensus is probably this report from the 2007 CIESM international meeting in Almería, Spain:

But let me add some more thinking: As the question correctly states, in the 70's, deep drillings carried out on board the Glomar Challenger proved the presence of salt deposits offshore Mallorca, demonstrating that the classical onshore salt outcrops had an equivalent in the open sea, and providing direct sampling of a great evaporitic basin in the deeper inner parts of the sea. But this had already been seen earlier through seismic profiling since the 60s. The IODP expeditions did find unprecedented anhydrites and rounded pebbles in what was supposed to be the deeper parts of the Messinian Mediterranean, and the interpretation was that the Mediterranean went nearly dry and became a set of brackish lakes (remnants of a desiccated Med) towards which rivers in the dry seafloor were flowing. But these are weak evidence and both are indeed strongly contested.

Importantly, the presence of salt does not necessarily imply a desiccation or a large drawdown of the Med, and that's the main source of the debate. Note that to increase the salinity of the Mediterranean it only takes a reduction of the outflow, whereas in order to make it dry, it also requires cancelling the inflow from the Atlantic. Artificial salt pans, for example, evaporate sea water keeping the brine at a constant level, maintained by further inflow of seawater. Furthermore, as early as 1849, italian chemist J. Usiglio described in detail how, although the sea salt contains ten times more halite than gypsum, it is gypsum that precipitates first due to its lesser solubility. This may explain the abundance of gypsum onshore the Mediterranean, in contrast with the relative scarcity of onshore halite, which seems to have deposited only in the deeper parts of the Med. 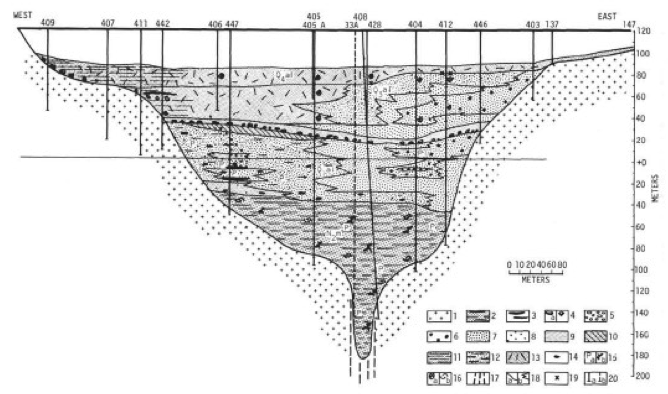 Section across the Nile in Aswan (Egypt) by Chumakov (1967), based on wells. It shows a valley excavated by the river during the MSC, now filled with later sediments. Following to the most extended interpretation, this valley was excavated by the Nile River due to the ~2000m lowering of the level of the Mediterranean, during the Messinian salinity crisis.

The main evidence really supporting a large level fall of the Mediterranean had arrived actually somewhat earlier than the drillings, back in the late 1950s. The building of the Aswan Dam (1,200 km upstream from Alexandria) was disturbed by the discovery of a deep narrow gorge excavated in granite, hundreds of metres below sea level (Chumakov, 1967). This gorge has been since filled by loose Pliocene sediment that hindered the construction of the dam. It is now known that the gorge follows and deepens downstream the Nile, reaching around 2000 m deep below Cairo. The Rhone, Ebro and Po rivers formed also similar gorges, now buried under their present deltas, under post-Messinian sediment. In contrast with other submarine canyons formed in the margins of the continents (linked to turbidity currents originated underwater at the continental shelf), the Messinian ones along the Mediterranean coast share many characteristic with river valleys (Loget et al., 2006, Urgeles et al., 2010). 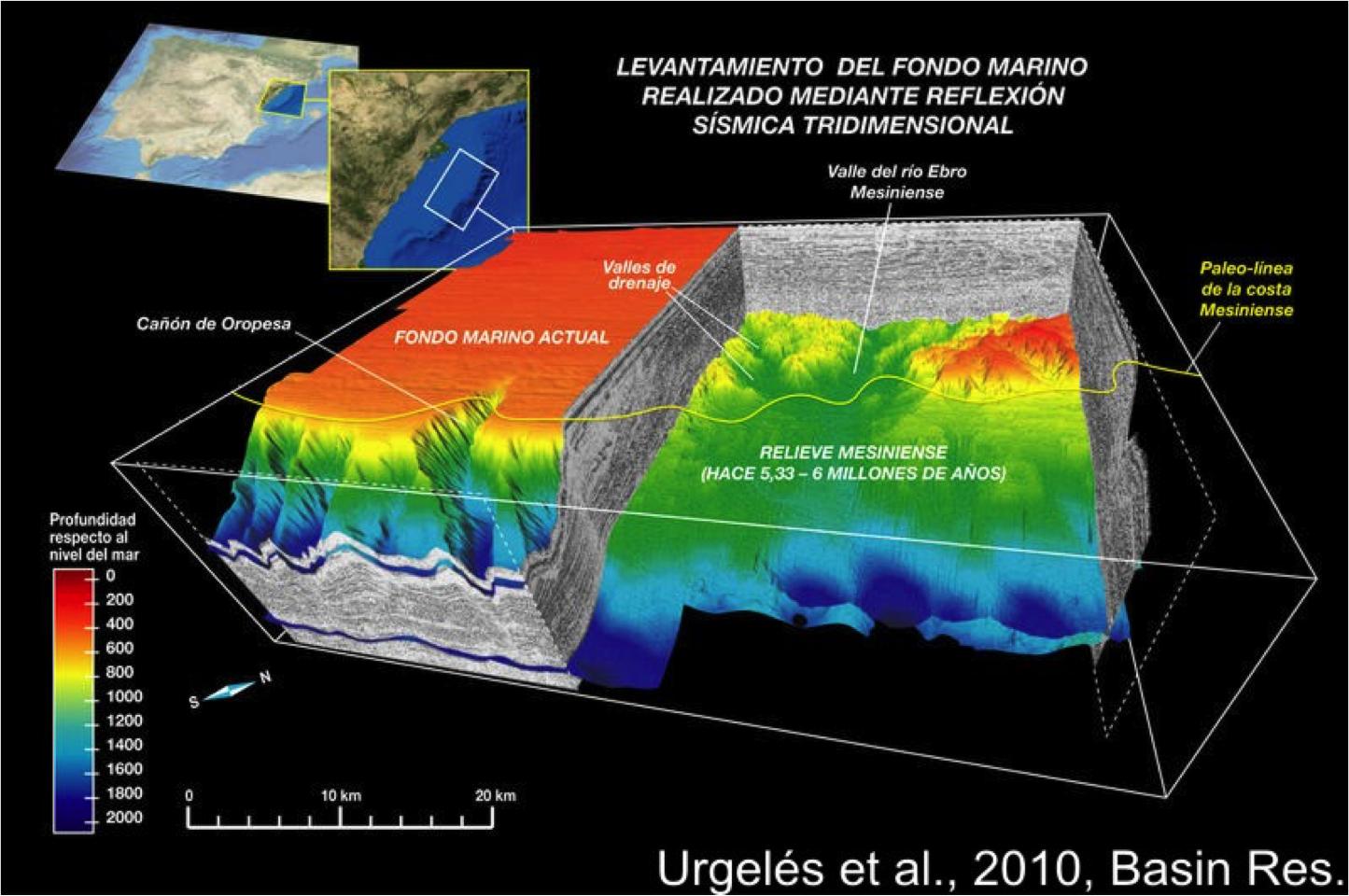 Fluvial valley excavated in the seafloor during the Messinian, presumably during a dramatic lowering of the sea level. It has been found in 2012 buried under several kilometers of post-Messinian sediment, thanks to 3D high-resolution seismic reflection techniques.

Nevertheless, this evidence is also contested, based on other mechanisms that may also explain such erosional surfaces (see f.e., Roveri et al., Am.J.Sci., 2014).

I wrote a popular science article on this, a kind of introduction to the Messinian salinity crisis.

Some other selected technical references here:

According to palaeoclimatic records modelled from sediments studied at Monte dei Corvi, in the paper Reconstructing the temperature and salinity of the Mediterranean Sea through the Late Miocene (13 Ma - 6 Ma) prior to the Messinian Salinity Crisis (Alexandrina et al. 2014), that using alkenone paleothermometry, there was a cooling trend starting at 8.1 million years ago, developing a cold period around 7 million years ago and continuing to the Messinian Salinity Crisis (MSC) as evidenced by a disruption in marine sedimentation (and changes to the surrounded flora and desertification in the Sahara). 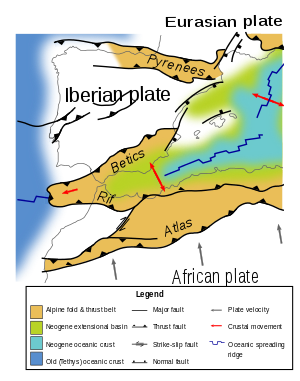 The MSCis described in the paper Modelling global-scale climate impacts of the late Miocene Messinian Salinity Crisis (Ivanovic et al. 2014) as being the result of the influences of climatic change as observed in sedimentary strata described by Alexandrina et al. 2014 and of tectonic activity of the offshore Betic range, as detailed by Ochoa et al. 2014. They also suggest that during the MSC, there were intermittent outflows of saline water into the Atlantic - causing disruptions to the thermohaline circulation.

Dr. Iuliana Vasiliev of the University of Utrecht, suggests that one possible influence during the MSC was interactions with the closing remnants of the Paratheys Ocean, as shown in the map below: 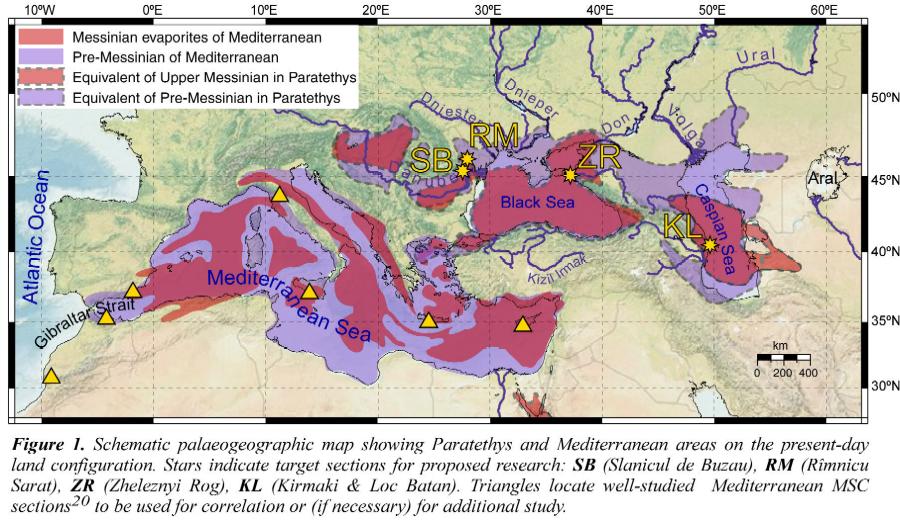 Not the answer you're looking for? Browse other questions tagged oceanography paleoclimatology mediterranean or ask your own question.

22
How is ocean salinity measured from space?
13
Is it possible to forecast ocean salinity 100 years into the future?
10
Differences between TEOS-10 and EOS-80 for salinity
6
ocean current frequency
7
How does salinity and density affects sea surface temperature?
5
Guinea Current existence in the Atlantic
2
baroclinic current - dimensional analysis
4
What is the fastest ocean deep current?