What are the differences between an LES-SGS model and a RANS based turbulence model?

I'm kind of new to the Large Eddy Simulation (LES) modeling world and I wondered what is the difference between an LES subgrid scale model like the Smagorinsky–Lilly model and a one-equation Reynolds-Averaged Navier-Stokes (RANS) based model like the Spalart-Allmaras. They are both based on the Boussinesq eddy viscosity ($\mu$) hypothesis and both using a one-equation approach for modelling $\mu$. However, no one is using the Smagorinsky–Lilly model for RAS or the Spalart-Allmaras for LES.

What is the difference between these two models and what kind of physical processes are they applied to?

The biggest difference between LES and RANS is that, contrary to LES, RANS assumes that $\overline{u'_i} = 0$ (see the Reynolds-averaged Navier–Stokes equations). In LES the filter is spatially based and acts to reduce the amplitude of the scales of motion, whereas in RANS the time filter removes ALL scales of motion with timescales less than the filter width.

I would recommend reading Fröhlich, Jochen, and Dominic von Terzi. "Hybrid LES/RANS methods for the simulation of turbulent flows." Progress in Aerospace Sciences 44.5 (2008): 349-377.

From that paper, specifically the section 'Structural similarity of LES and RANS equations', you can see that the equations being solved are essentially the same for LES and RANS, however, the physics are different. The main difference being that in RANS the unclosed term is a function of the turbulent kinetic energy and the turbulent dissipation rate whereas in LES the closure term is dependent on the length scale of the numerical grid. So in RANS the results are independent of the grid resolution!

A model qualifies as an LES model if it explicitly involves in one or the other way the step size of the computational grid. RANS models, in contrast, only depend on physical quantities, including geometric features like the wall distance.

As far as typical processes, this figure summarizes it pretty well. DNS resolves all scales of motion, all the way down to the Kolmogorov scale. LES is next up and resolves most of the scales, with the smallest eddies being modeled. RANS is on the other end of the spectrum from DNS, where only the large-scale eddies are resolved and the remaining scales are modeled. 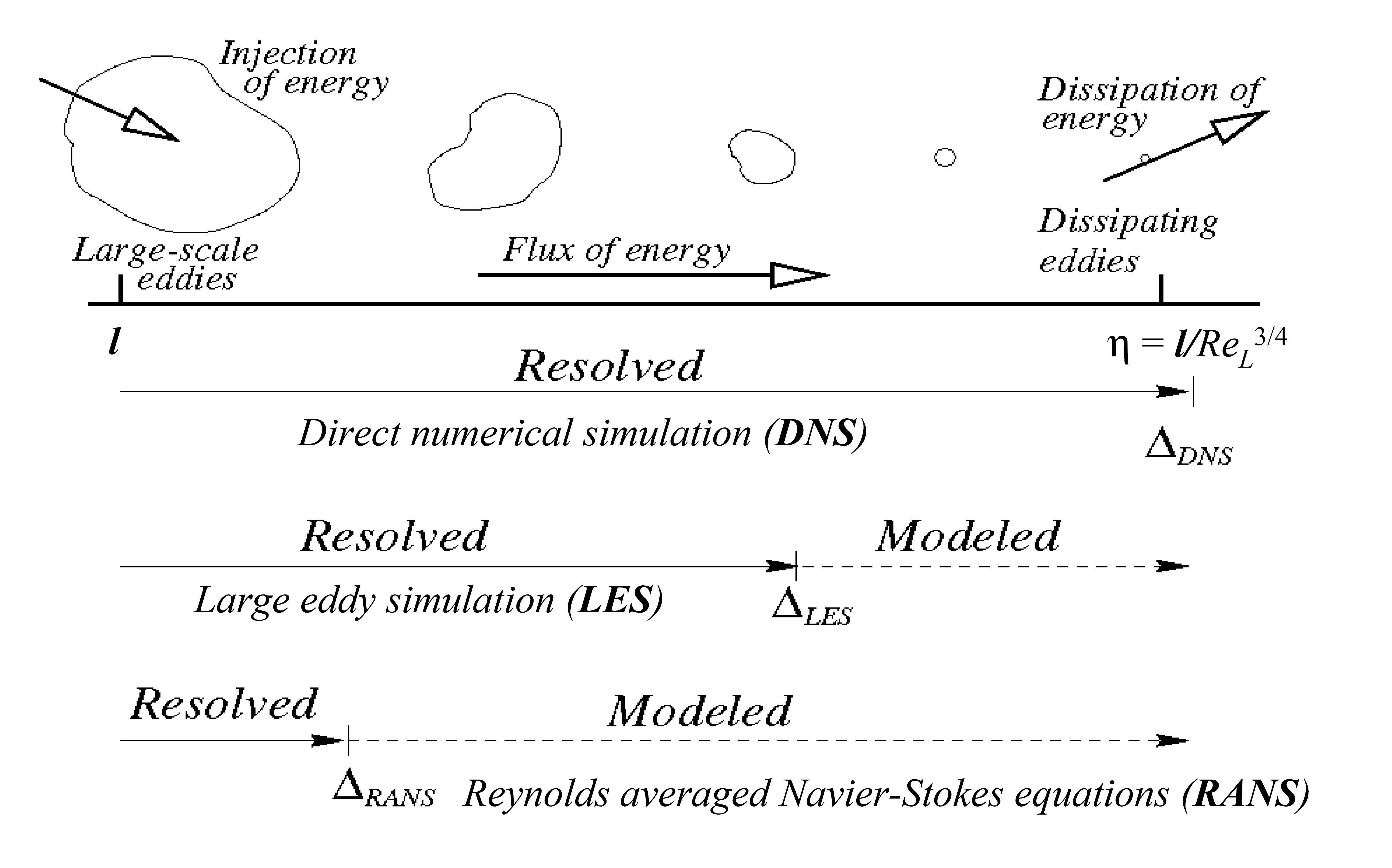 The figure above is from André Bakker's lectures: http://www.bakker.org/dartmouth06/engs150/10-rans.pdf

LES: Aims to solve the computational cost that DNS poses and reveals the eddies hidden behind the mean in RANS. Good for coastal scale scale 2D simulations and possibly lab-scale 3D simulations with a highly optimized parallel code.

RANS: It is the least computationally expensive method that is used for turbulent modeling, but it is really not very good when certain phenomena cannot be averaged, such as instabilities. Acoustic waves are also incorrectly modeled because they are inherently unsteady processes which can't be averaged, so typically modelers will crank up the turbulent and numerical viscosity to remove acoustic waves from the system.

This shows the main difference between LES and RANS. 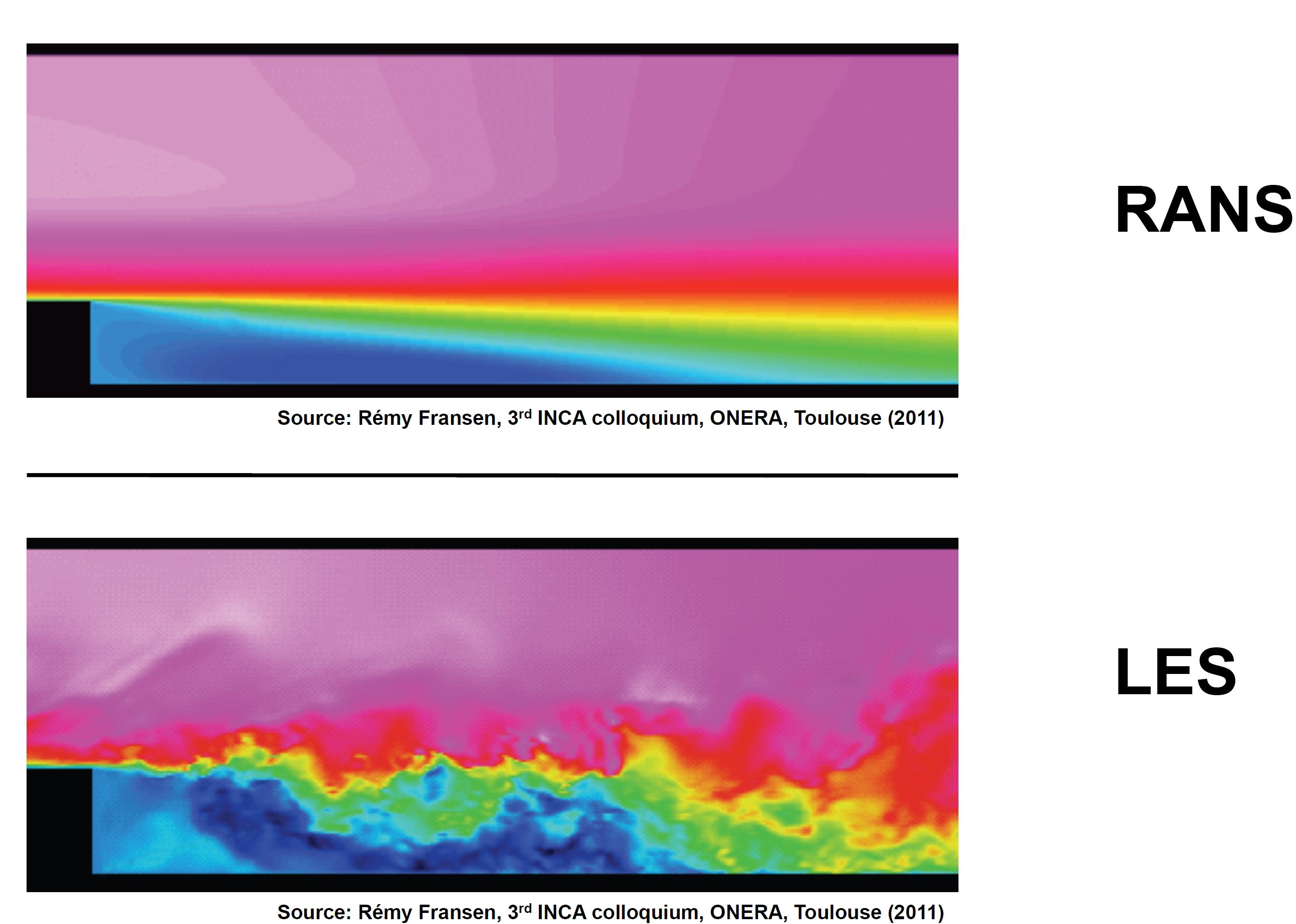 Not the answer you're looking for? Browse other questions tagged models numerical-modelling turbulence or ask your own question.

22
What are the major differences between weather models and climate models?
14
How can I estimate a 2 m temperature from / in an atmospheric model?
8
What determines the differences in results between various weather models?
14
What is the difference between a high-resolution model and a regular model run?
13
What are the differences between implicit and explicit methods when applied to modelling Earth systems?
9
Given the well known effects of the inverse turbulence cascade for 2D flow, does it make sense to use grid resolutions that resolve turbulence?
8
What exactly is a model grid?
5
Nonlinear Stokes equations for glacier modeling
2
Difference between model parameter and observable parameter