Why would magma have high amounts of nickel and chromium?

I am doing a research project on Mount Lamington and through my research I have found that its magma has unusually high amounts of chronium and nickel. What would cause this to happen? Is there science behind it, or is it unexplained?

The current thinking according to modelling and previous observations is that the high amounts of $\ce{MgO}$, $\ce{Cr}$ and $\ce{Ni}$ is due to the magma feeding the Mt. Lamington volcano being contaminated by the nearby Papuan Ultramafic Belt (Smith, 2014; Arculus et al. 1983). The Papuan Ultramafic Belt is, according to Lus et al. (2001), a early Neogene (Tertiary) ophiolite. The region itself is not associated with an active Wadati-Benioff Zone (Smith, 2004).

Smith describes that the composition of the magma that fed the Mt. Lamington eruption represents part of an unusual tectonic environment, as described in part in the answer to the earlier question What are the geological mechanisms for sea floor spreading in the Bismarck Sea?. Smith describes that the magmatic geochemistry is influenced by the variables of crustal thickness, tectonic setting and the geochemistry of the lithosphere.

Finally, the relationship between the tectonics of the region and magmatism of the Papuan arc environment has been described as a 'delayed melting' as a partial melting of a source that was

metasomatised in an earlier convergent event.

The complicated geology is shown in the image below: 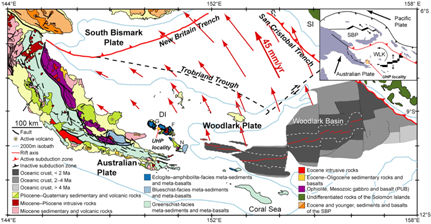 Tectonic and geological map from Syracuse University Department of Earth Sciences, the ophiolite (PUB) outcrops are in purple.

Not the answer you're looking for? Browse other questions tagged volcanology geochemistry volcanoes petrology or ask your own question.

8
What are the geological mechanisms for sea floor spreading in the Bismarck Sea?

11
What is the mechanism behind changes in oxidation state (of iron, for example) as magma rises?
11
Olympus Mons sized volcano on Earth?
10
What is the geochemical origin of carbon dioxide with the 'white smokers' of the Champagne Vent?
8
Magma resultant from group 1 and group 2 elements?
9
Why does Australia have extensive uranium ore deposits?
4
What causes lava eruptions (and shutoffs)?
5
What would happen if magma flows into a very large oil deposit?
6
Does Xenon really covalently bond to oxygen within quartz?
6
Why doesn't the Earth's outer core dissolve into the mantle?