How are 'Morning Glory' clouds maintained?

Reading the Physics.SE question What is the current physical theory of what causes the 'Morning Glory' roll cloud over Northern Australia? (pictured below): 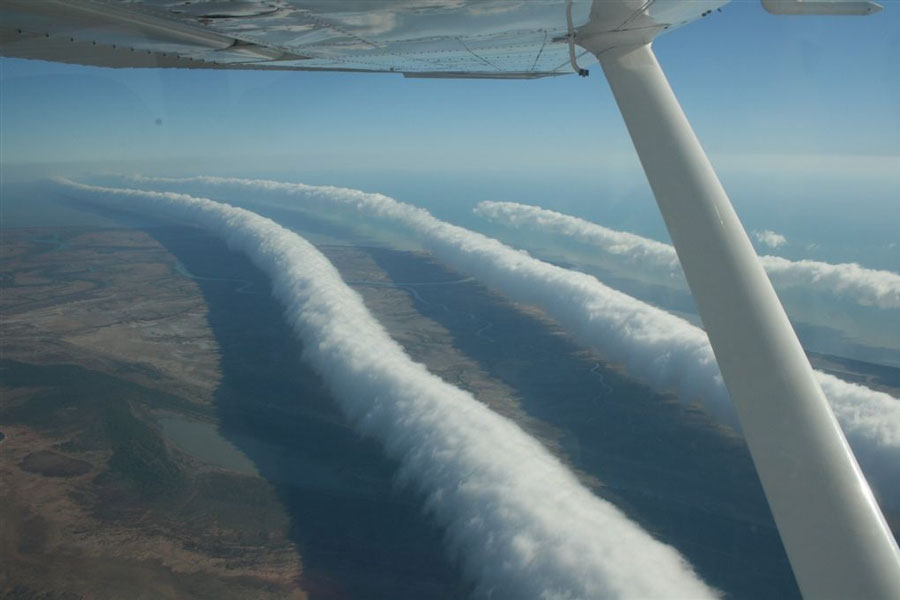 Image source: NASA Astronomy picture of the day 24 August, 2009 of a Morning Glory roll-cloud over northern Australia. The origin and processes are quite well understood.

In the paper linked in the answer: Travelling Waves and Bores in the Lower Atmosphere: The 'Morning Glory' and Related Phenomena (Smith, 1988), the author expressed an uncertainty in his concluding remarks, which are the basis of this question:

The structure and origin of northeasterly morning glories is relatively well-understood, although questions remain about the precise mechanisms inhibiting the leakage of wave energy to the upper atmosphere, and the transformation of disturbances over the land during the day when the original wave-guide is destroyed by convective mixing.

The italicised portion suggests that some mechanism(s) prevents these effects from occurring, resulting in the roll-cloud persisting.

These are some of the most recent areal photographs taken of this phenomenon. The Morning Glory clouds are the visible manifestation of atmospheric Internal Solitary Waves (see the schematic in (b) below). They propagate on a sharp interface between a relatively dry layer ambient air above and a layer of sea water laden air pushed in from the night before below. When the moist air rises the cloud is formed above the condensation level and eventually evaporates at the trailing edge of the wave.

In these photographs, the cloud itself appears as a cylindrical shaped core with high vorticity at a height of $500$ m and a $1$ km diameter. They may stretch for thousands of kms while traveling at up to $50$ km/h.

Internal Solitary Waves are stable by definition, they are waves of permanent form which owe their existence due to a balance between nonlinear wave-steepening and linear wave dispersion. Of course in the environment there are several other nonlinearities which could potentially break apart this structure through various mechanisms. However, devoid of other atmospheric forcing these waves can travel thousands of KMs without loosing much energy.

A final point is that these waves are ubiquitous but the thing is that we very rarely can observe them is such glorious ways, so there is nothing that says that the Morning Glory is special as far as stability goes compared to other locations on Earth. It is in fact common for such disturbances to maintain their shape over large distances. 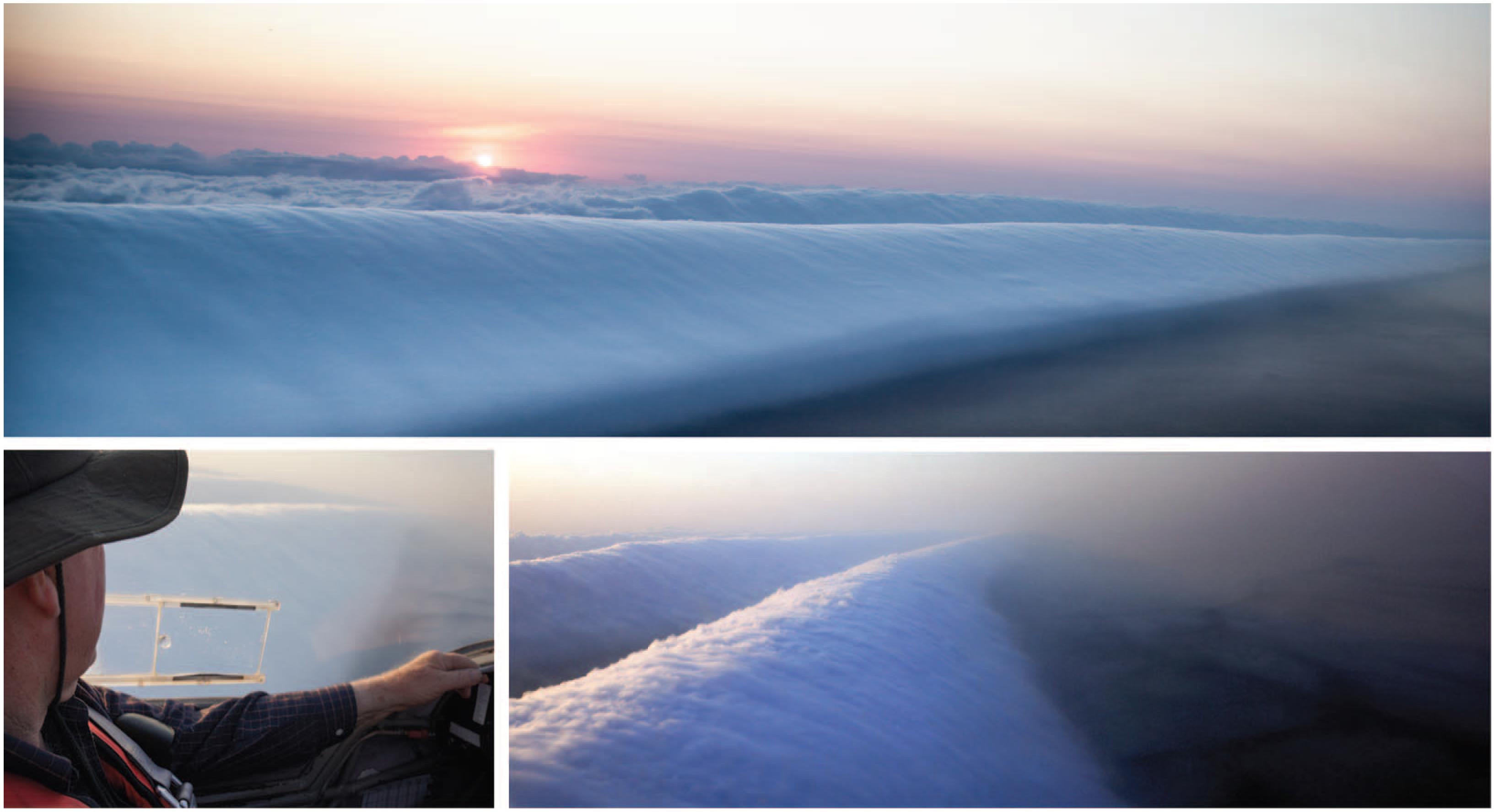 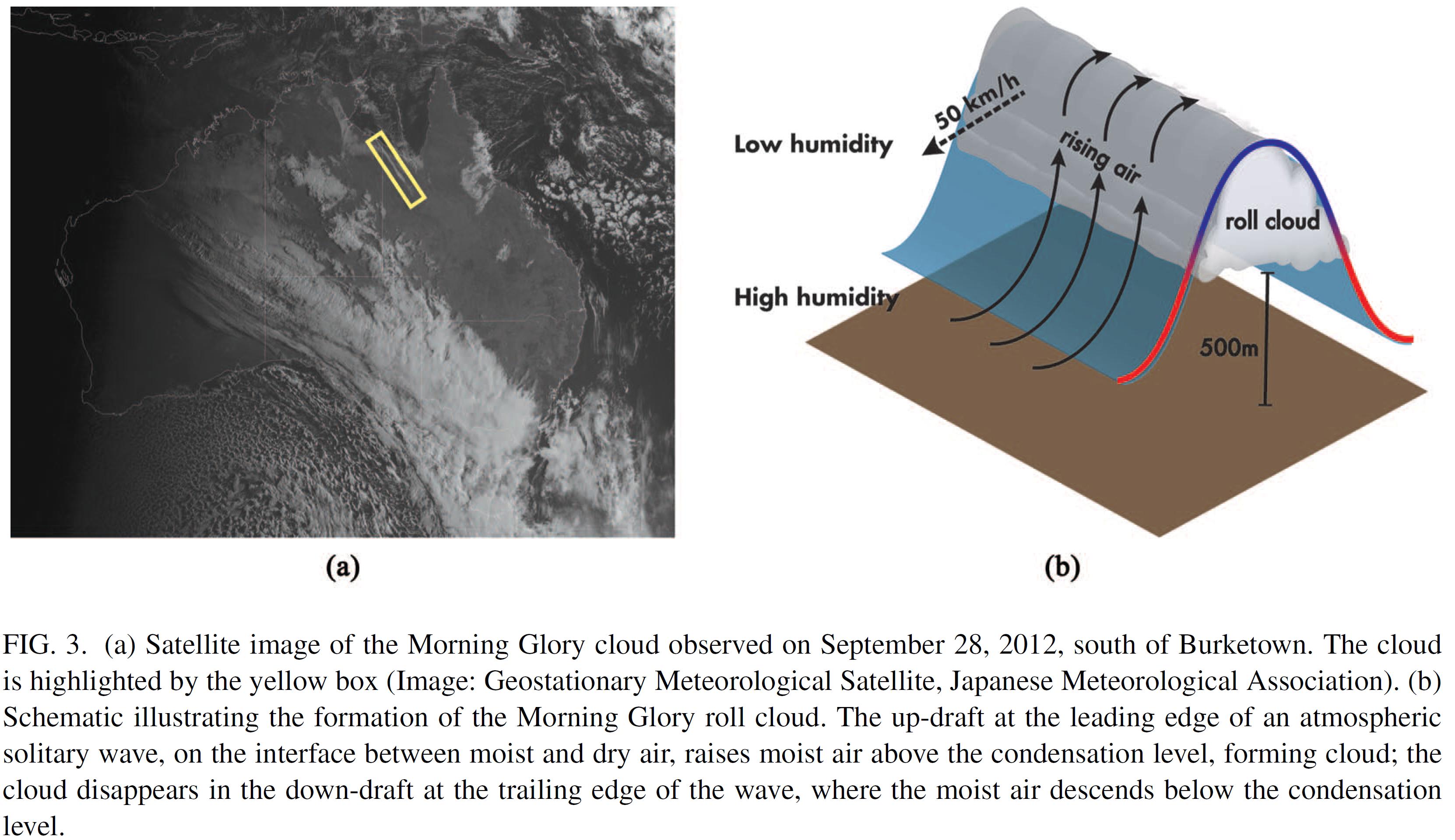 Part of Answer one; However, devoid of other atmospheric forcing these waves can travel thousands of KMs without loosing much energy.

-Shows that the original question is not really answered.

I want to rip this question apart;

12
What determines how fast clouds move?
7
Strangely bright morning twilight over Switzerland
15
What type of cloud formation are these dark low-hanging clouds?
14
Are cloudy nights warmer than nights without clouds?
17
Why are clouds darker before it rains?
4
Why are lenticular clouds circular?
8
Are these clouds exhibiting gravity waves?
3
Are there "transparent" clouds?
4
Why are clouds outlining the southeastern United States?