Global oil reserves are, for practical purposes, limited. We're using them at a rate far exceeding the rate of deposition. At some point, we will have to spend more energy to extract remaining reserves than we get back from burning them (extraction might still be worth it, because plastics and other oil products are really useful).

When is the point at which conventional oil production peaked/will peak?

For the purposes of this question, please only consider conventional oil resources: that is, excluding shale oil, synthetic hydrocarbons, biofuels, oil sands, coal to liquids, and gas to liquids.

The answer depends a lot on what you mean by "excluding shale oil". Tight oil production, commonly referred to as "shale oil" is about 4 million barrels per day currently (2014), compare to almost none in 2005.

So compare to 2005, tight oil (shale oil) and oil sands production is up about 5 million barrels per day. 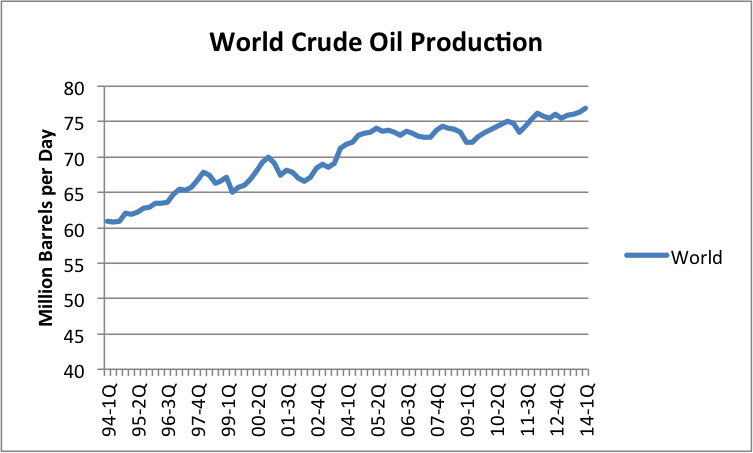 From the graph it can been seen that subtracting out the 5 million barrels/day of unconventional production, world production is somewhat below the 2005 level. (Quantitative values were 73.9 M bbl/day in 2005; 76.9 M bbl/day in first 8 months of 2014)

With the expectation that tight oil and oil sands production will increase in share of the production, it is entirely possible that the peak in conventional production has already occurred.

Not the answer you're looking for? Browse other questions tagged petrology economic-geology or ask your own question.