(I'd imagine that brightness and duration are correlated to the charge).

Positive lightning is indeed very interesting. According to the National Weather Service, the reason why it has a higher amperage and voltage is due to the due to the amount of air it must get through to reach the ground. Otherwise, it would never reach the ground.

Since it originates in the upper levels of a storm, the amount of air it must burn through to reach the ground usually much greater. Therefore, its electric field typically is much stronger than a negative strike. Its flash duration is longer, and its peak charge and potential can be ten times greater than a negative strike; as much as 300,000 amperes and one billion volts!

This would also account for the brightness of positive lightning and the extended duration, as a higher amperage & voltage strike would appear brighter and take longer to dissipate.

This page talks about why positive lightning occurs. It says: 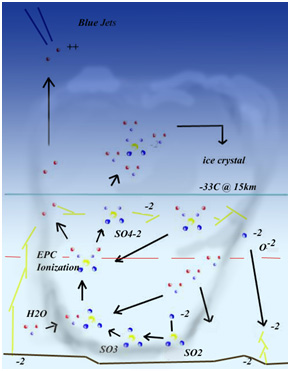 Positive lightning is probably so rare because it takes so many negative strikes in order for enough energy to build up to cause a positive lightening strike.

There are quite a few interesting facts about positive lightning:

Some interesting properties of positive lightning:

Another NOAA site says that positive lightning can strike "near the edge of a cloud", or even 10 miles away from the cloud! This means that a positive lighting strike could occur somewhere where the sky is blue, and it's not raining.

In addition, there is also a type of lightning called "bipolar" lightning, which changes its polarity.

Not the answer you're looking for? Browse other questions tagged meteorology convection lightning electromagnetism or ask your own question.

7
What causes a rainbow, its colours and its shape?
2
Atmospheric conditions needed that blocks all bright light during sunsets and allows you to stare directly at the sun
3
What is the most optimal latitude on Earth for the generation of extreme maximum temperatures?