Is the color of the sky the same everywhere on earth?

Is the color of the sky at noon (local time) in, say, NY, Buenos Aires, London, Nairobi, Sydney, New Delhi and Tokyo the same? I choose the specific time of noon to exclude the twilight colors of the sky and I choose cities that aren't above the northern or southern pole to make it easier.

Also, is the color of the sky of one region on earth the same all year round and all day long, once again, without taking in account twilight?

The blue color of the sky is due to Rayleigh scattering. As light from the sun shines down it scatters off of (mostly) nitrogen molecules in the atmosphere. Without this process, the sky would be dark during the day except for the bright sun, moon, and stars.

So, to answer your question, the color of the sky is the same for most places on the Earth at noon because the sunlight is relatively constant and the atmosphere is relatively uniform in composition (nitrogen and oxygen). The exceptions are air pollution, high latitudes, and high altitudes. Air pollution and high latitudes have similar effects in that more attenuation of the light occurs as it travels through more atmosphere, and therefore colors change like you see at twilight. Air pollution in particular is a highly variable source of scattering and absorption that gets quite extreme when there are high concentrations of particles. High latitudes change the geometry, similar to twilight. In contrast, high altitudes have less atmosphere, so if you go high enough (e.g. in a hot-air balloon) there just won't be much scattered light and it will get dark due to the lack of atmosphere.

From the wikipedia article:

In addition the oxygen in the Earth's atmosphere absorbs wavelengths at the edge of the ultra-violet region of the spectrum. The resulting color, which appears like a pale blue, actually is a mixture of all the scattered colors, mainly blue and green.

The reddening of sunlight is intensified when the sun is near the horizon, because the volume of air through which sunlight must pass is significantly greater than when the sun is high in the sky. The Rayleigh scattering effect is thus increased, removing virtually all blue light from the direct path to the observer. The remaining unscattered light is mostly of a longer wavelength, and therefore appears to be orange.

Absolutely not. While the answers by casey and farrenthorpe correctly state that the blue color is due to Rayleigh scattering, the composition of the atmosphere varies considerably from place to place - and with different composition come different degrees of scattering, and different color / intensity. Typically regions of greater industrial activity will carry larger densities of particles which, in the presence of moisture in the air, will become scatterers. The wavelength dependence is a function of the size of the particles - so as the size changes, so will the color.

See my answer to the question Why is the sun brighter in Australia compared to parts of Asia. The same mechanism that makes the sun "brighter" also makes the sky "darker" (namely, less scatter).

This is true even on a nominally "clear" day - because there is always some particulate matter in the atmosphere. And the concentration of particulates really does vary with location on earth - see this image as an example (from NASA). 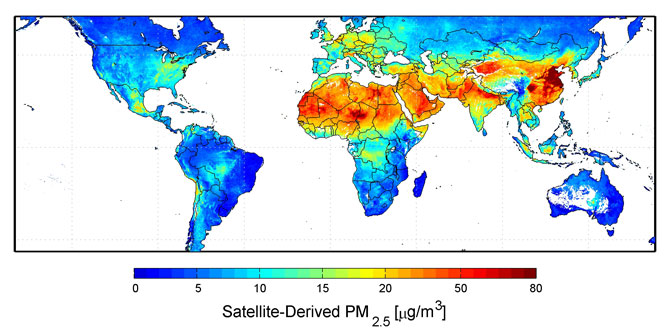 The other point worth keeping in mind is altitude: the sky looks darker when you are at the top of a mountain, even if the composition of the atmosphere is the same. That is because there is "less atmosphere" to scatter. And of course, some places on Earth are (always) at a different altitude...

To supplement farrenthorpe's answer, the color of the sky will be a function of the path length between the top of atmosphere and your eye along the path from the sun to you. Due to Rayleigh scattering, shorter wavelengths will scatter before longer ones. As the path length increases more of the longer wavelengths will be scattered. The color of the sky is the sum of all of the photons scattered out of the beam of photons from the sun and then re-scattered so they end up hitting your eye.

Given observations taken at solar noon at latitudes between the 66 N/S there likely is some variance in sky color as there will be subtle path length differences at different latitudes, particularly between the hemispheres due to the earths tilt. However, you would likely need a sensitive instrument to notice these differences and could consider it a constant. The variance in sky color during the diurnal cycle from dawn till dusk is a far stronger effect than looking only at solar noon day-to-day.

Note that I am only considering scattering by a uniform atmosphere neglecting the effects of aerosols and water vapor. Foris's answer takes up this topic (and you can easily observe the difference in how the sky looks on a very dry day vs a very humid day).

Look near the Sun on a humid summer noon and then look at it after a strong cold front clears and tell me the sky is the same everywhere on Earth. Make sure your eyeballs are in shadow when you do this.

The color of the sky in Norway was greenish. In the Netherlands it was just blue. I saw this on my vacation to Norway around 1990. I supposed the sky in Norway was more greenish because of the large woods. So I suppose the color of the sky is also due to the reflection in it of what is on the ground. Presumably the sky in a large desert will cary the color reflection of the sand. Also the draining (partly) of the IJselmeer, a large Sea in the Netherlands caused the light in the sky supposedly to have become different. As I remember, less bright.

Not the answer you're looking for? Browse other questions tagged atmosphere radiative-transfer or ask your own question.

5
What would a planet's sky look like with different chemical compositions, such as low nitrogen, high methane etc?
1
Why is the sky blue? Due to the ozone layer or due to ''light scatterization in atmosphere''?

7
Can the clouds on Venus and Titan be categorized in the same way as clouds on Earth?
12
Weak flashes of light in the sky
2
Why doesn't the earth become superheated?
3
What are the major contributors to the amount of infra-red emitted by the earth?
3
Why was the sky SO yellow?
5
Appearing of Weird Cornered Cloud in Sky?
1
Color of Sunsets