A rogue wave is, according to NOAA, "a large, unexpected and dangerous" oceanic wave. These are also known as 'killer' or 'freak' waves and have been a part of folklore of the past and observation of the present - such as in the rather terrifying example below (from gcaptain.com: 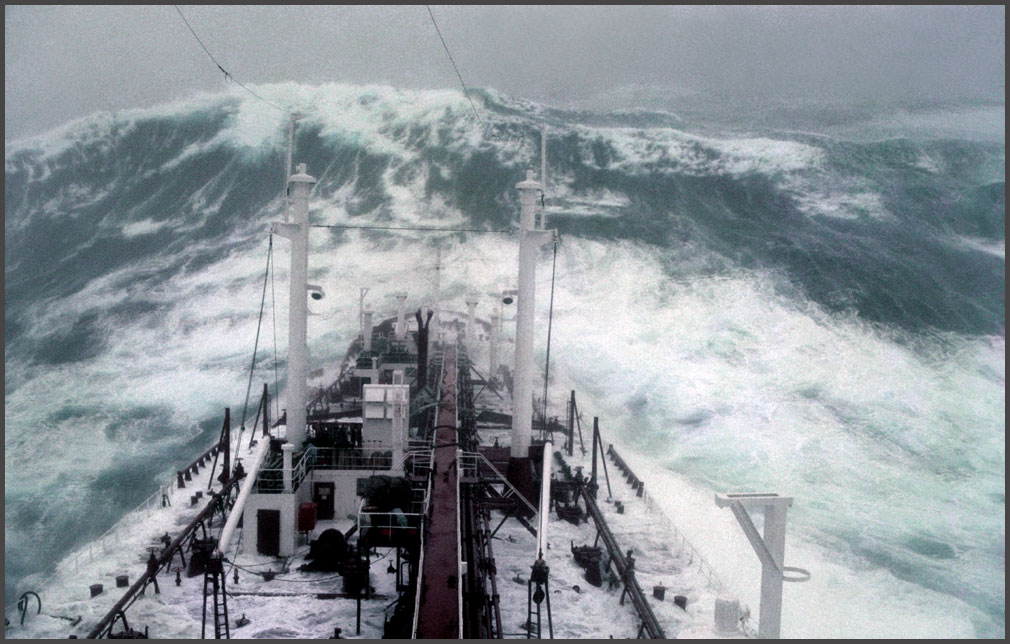 There are a number of theories as to how these form, according to the NOAA page linked above, it can be a result of constructive interference or focusing of wave energy. Another theory reported in the Scientific American Blog entry from 2009 The Real Sea Monsters: On the Hunt for Rogue Waves is that

"If a wave propagates from east to west, and the current moves west to east, then a wave starts to build up," says Wu, who studies waveâ€“current interactions in a 15-meter pool. The wave basically climbs the current's wall, rising out of what appears to be nowhere.

This question is not so much based on the actual mechanism behind rogue waves, but how we can use these models to forecast their occurrence, going from the theoretical models discussed in the Scientific American blog to develop actual proven forecast models.

What is the status of research in forecasting oceanic rogue waves?

There are few known mechanisms that lead to the generation of Rogue waves, such as the ones you mentioned, but essentially all Rogue waves are the due to the nonlinear wave dispersion characteristics of large groups of waves.

I can imagine one approach to predicting the emergence of such waves is to simulate the evolution of initial wave states with Navier-Stokes based wave models that capture the nonlinear dynamics involved in real time. However, with the limited computational power and numerical techniques we have today, that is currently impossible.

So I think the question is: Do we know of specific signatures in the ocean wave climate, which ultimately give rise to these so called "walls of water"? Presumably these wave patterns could serve as early warning indicators of an upcoming rogue wave event.

There is indication that the emergence of solitons from modulational instability or dispersion of wave packets occurs in consonance with nonlinear effects and nonlocal coupling giving rise to Roge waves. Thus, an approach based on the spectral analysis of the sea-state as a whole or of particular envelopes of propagating waves may hint at particular wave-field patterns that originate Rogue waves. Please see the sources below for more information on the current state of the art. However, at the moment the answer is that forecasting Rogue waves is still much of an unknown.

A recent study about rogue events (including waves) is published in the Physical Review Letters paper Predictability of Rogue Events (Birkholz et al. 2015) Abstract only.

The main findings are that by using nonlinear time series analysis, and combining rogue wave data recorded from the Draupner platform (Draupner Wave, with time series from two optical systems, the researchers have found evidence that suggests that despite the turbulence involved, a small time warning could be given as their research suggests that

rogue events do not necessarily appear without a warning, but are often preceded by a short phase of relative order.

This study hints at a very short warning could be provided, as in the New Scientist summary article Rogue wave ahoy! New technique can predict surprise sea threat:

means rogue ocean waves are deterministic and have a small amount of predictability. This is because rogue ocean waves arise from turbulence, which is difficult to predict, he says, but not random at its core, he says. In the best case scenario such waves might be predicted 10 to 20 seconds before impact.

14
What causes waves to form the characteristic "breaking" shape as they approach the shoreline?
15
What is a typical value of the Péclet number for internal waves?
5
Whitecapping in ocean surface waves
15
At the ocean surface, why do large amplitude waves travel faster than small amplitude waves?
4
Best book/s of oceanic data treatment and analysis?
6
Can up-welling water at oceanic fronts be physically felt?
2
Any site for monitoring equatorial oceanic waves?
5
The mean direction of waves in a directional distribution
3
How can oceanic Rossby waves move from East to West?
3
Are ocean waves diminished, enhanced or unaffected by underwater obstacles