What is the tectonic setting for the formation of the Great Dividing Range in Australia?

Australia's Great Dividing Range is the largest mountain range on the continent, running down the length of the eastern part of the continent, as shown in the Geoscience Australia map as a dark line, below:

The tallest peak in the range is Mt. Kosciuszko at 2228 m asl. The Wikipedia entry is rather vague about the formation, with

The Great Dividing Range was formed during the Carboniferous period—some 300 million years ago—when Australia collided with what is now parts of South America and New Zealand. The range has experienced significant erosion since.

it is particularly vague regarding the question - What is the tectonic setting for the formation of the Great Dividing Range in Australia?

The tectonic history of Australia's Great Dividing Range is very complex, extending back into the Neoproterozoic era (1), and is far more complex than the Wikipedia quote. Additionally, evidence (shown in this answer) demonstrated that the eastern third of the Australian landmass is comprised of accreted arc systems that developed along the continental-oceanic Eastern Gondwana boundary following the initiation of subduction in the late Neoproterozoic (1) forming in a series orogenies (as shown on the map below (2) - not due to a single continental collision. These orogenies are incorporated in the 'Terra Australis' Orogen that ceased approximately 230 million years ago (3). 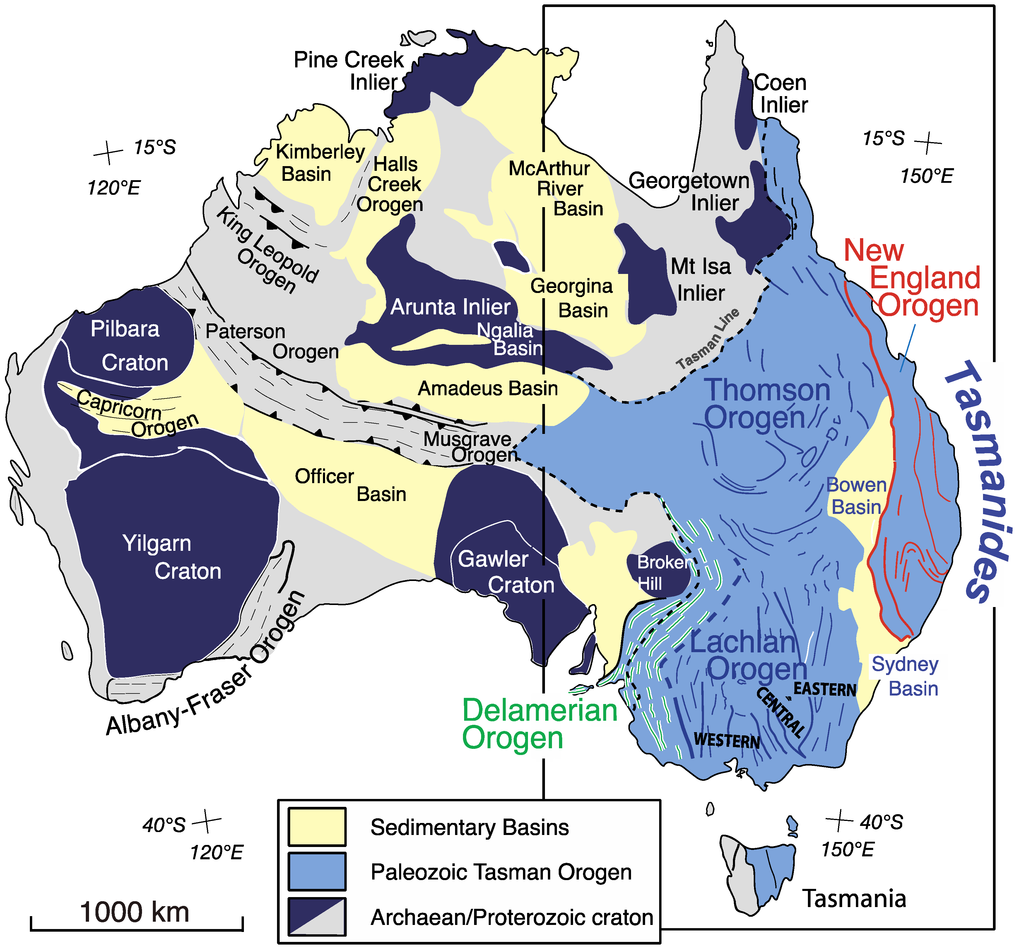 As can be seen by the diagram below (2), the youngest accreted orogen occurs in the eastern most margins of the Australian landmass, where the Great Dividing Range is. 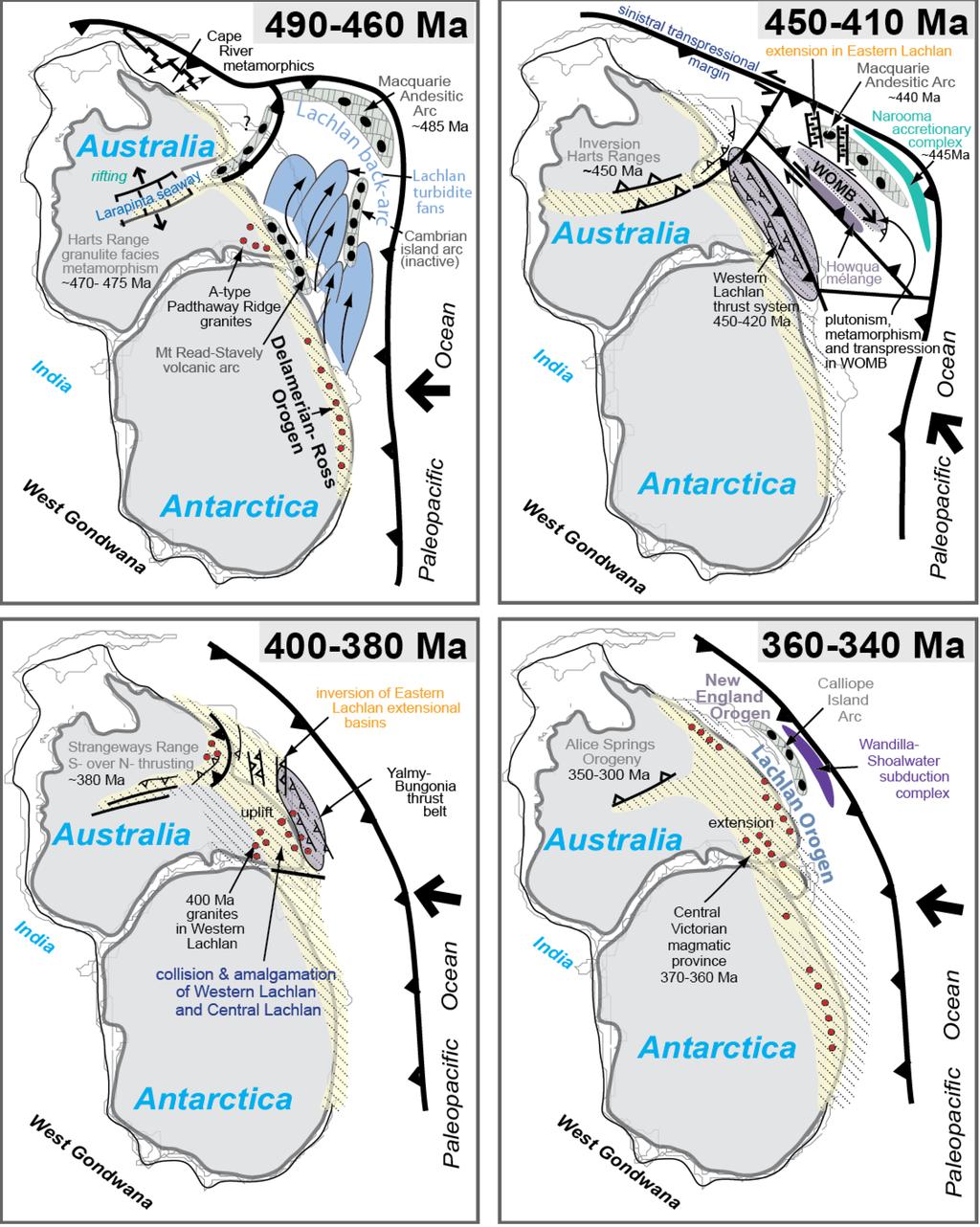 Also, the cessation of arc accretion, did not end the tectonic story affecting the Great Dividing Range. Large Igneous Province volcanics occurred in north Queensland in the early Cretaceous, then epeirogenic uplift, exhumation and continental rupturing culminating in the opening of the Tasman Basin occurred in the mid Cretaceous, leading to the separation of Zealandia (New Zealand + submerged continental shelf) and giving shape to the eastern Australian coastline (and eastern boundary of much of the Great Dividing Range) (4). The rifting process is illustrated below 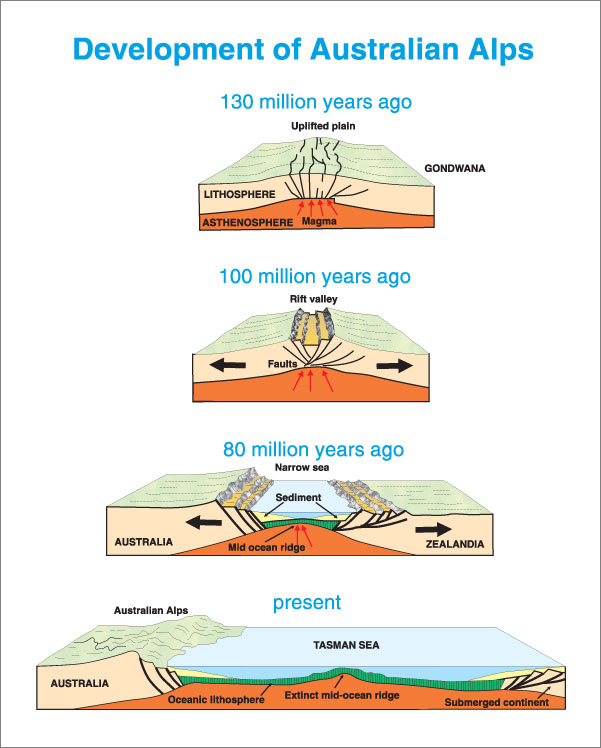 (3) Cawood, 2005, Terra Australis Orogen: Rodinia breakup and development of the Pacific and Iapetus margins of Gondwana during the Neoproterozoic and Paleozoic, Earth-Science Reviews

9
What tectonic structures delineate the split between the Australian and Indian tectonic plates?
9
Did an impact crater influence the formation of uranium deposits in South Australia?
8
What is this strange formation near Râmnicu Vâlcea?
5
If we assume the mega impact hypothesis for the formation of Moon, where on Earth is the impact point?
3
tectonic faults catalog for plot
5
The edges of the tectonic plates
6
What separates the Karakoram Range, the Hindu Kush, and the Himalayan Range?
1
Is there a name for subduction boundaries at the North of Australia?
1
What is the History of the Brooks Range?