In reading about observing noctilucent clouds, several articles about this phenomena, such as Science Daily's Spectacular 'Night-shining' Clouds Could Be A Harbinger Of Climate Change, suggest that changes in their frequency and latitudinal-occurrences may be linked to anthropogenic climate change.

Is there evidence of a link between anthropogenic climate change and changes in the frequency of noctilucent cloud occurrences?

The current answer is uncertain, especially with recent observations.

Zahn (2003) outlined that despite the possibility of noctilucent clouds (NLC) being sensitive to water vapour mixing ratios and temperature, there are 3 main concerns as to the link between the frequency of NLC occurrences and climate change:

In 2007, the AIM (Aeronomy of Ice in the Mesosphere) mission was launched to explore NLC and related phenomena, in particular, the SOFIE (Solar Occultation for Ice Experiment) instrument. 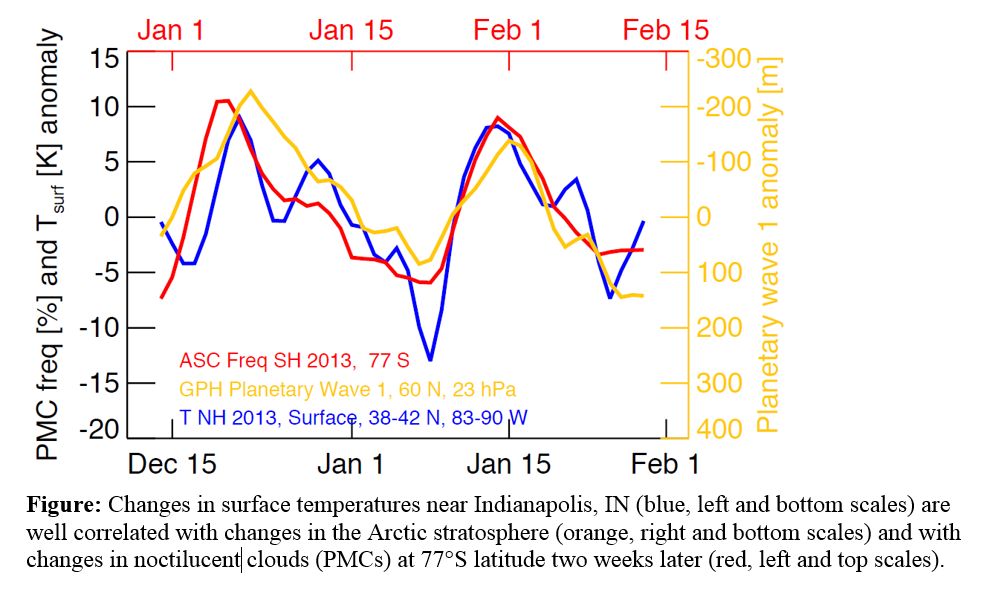 This suggests that changes in winter temperatures on the opposing hemisphere may indeed alter the frequency of NLC occurrences.

However, other influences are being investigated, such as solar cycles, observations and research from the CAWSES II Climate and Weather of the Sun-Earth System mission have found that there appears to be a correlation between NLC frequency and solar flux, as seen in the graph below:

This all ties in with Zahn's 3rd doubt - more data from multiple observations are needed in order to fully determine whether or not the frequency of NLC has any relationship with climate change.

8
Where can we see the noctilucent clouds?
20
Academic but accessible defense of the scientific understanding of anthropogenic climate change?
15
What is a reasonable forecast of sea level in 2100?
6
Coral growth keeping up with sea level rise?
9
Any historical examples of destructive climate warming?
3
Are there "transparent" clouds?